(This tour is now updated through Day 4, January 16th) 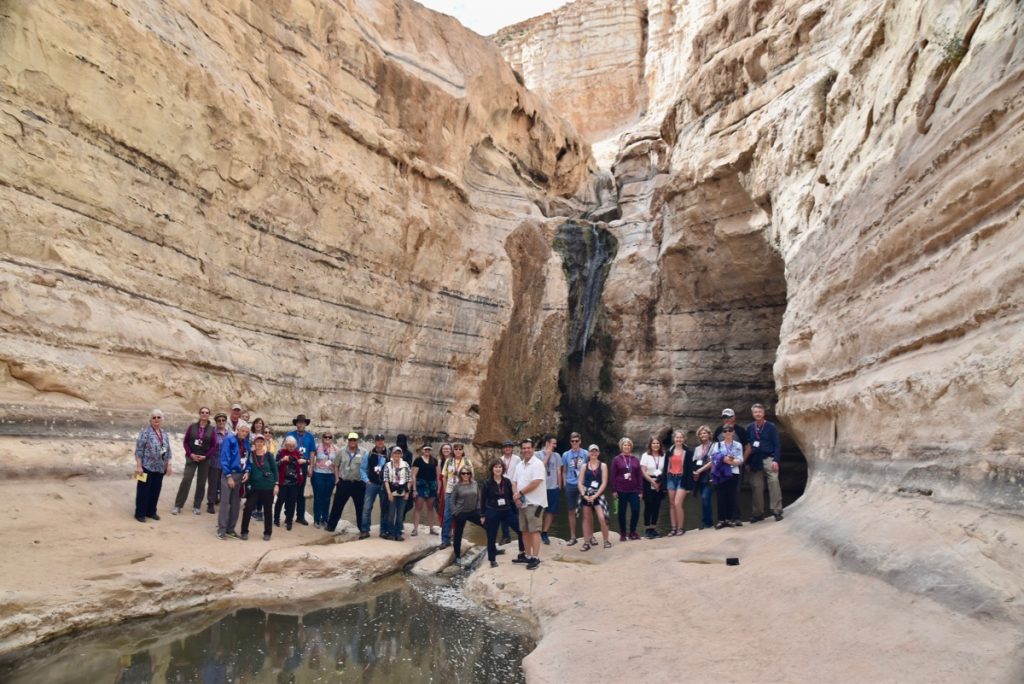 (will be posted once the trip begins)

(will be posted once the trip begins)

Our day of departing for Israel finally arrived! God brought together 36 people for this Israel tour. 10 in the group arrived on their own, while 26 of us flew on flights today.

Traveling through either London or Rome, our approach pattern into Israel took us over the Island of Crete before we all landed at the Ben Gurion Airportin Tel Aviv this afternoon. After passport control, we were greeted by our Israeli agents and bus driver.

On our way to our hotel in Bat Yam (south of Tel Aviv), we made a brief stop in Jaffa (Joppa). By the replica of the big fish, we read from Jonah 1. We also read from Acs 9 and 10 about Peter here. Additionally, Solomon would use the port of Joppa for the importing of cedars from Lebanon used in the Temple in Jerusalem.

Arriving at the hotel, we checked in. Following a nice dinner at a nearby restaurant, we had a brief orientation meeting. Some even walked along the beach before retiring or the evening!We are excited about being here in Israel, the land of the Bible! 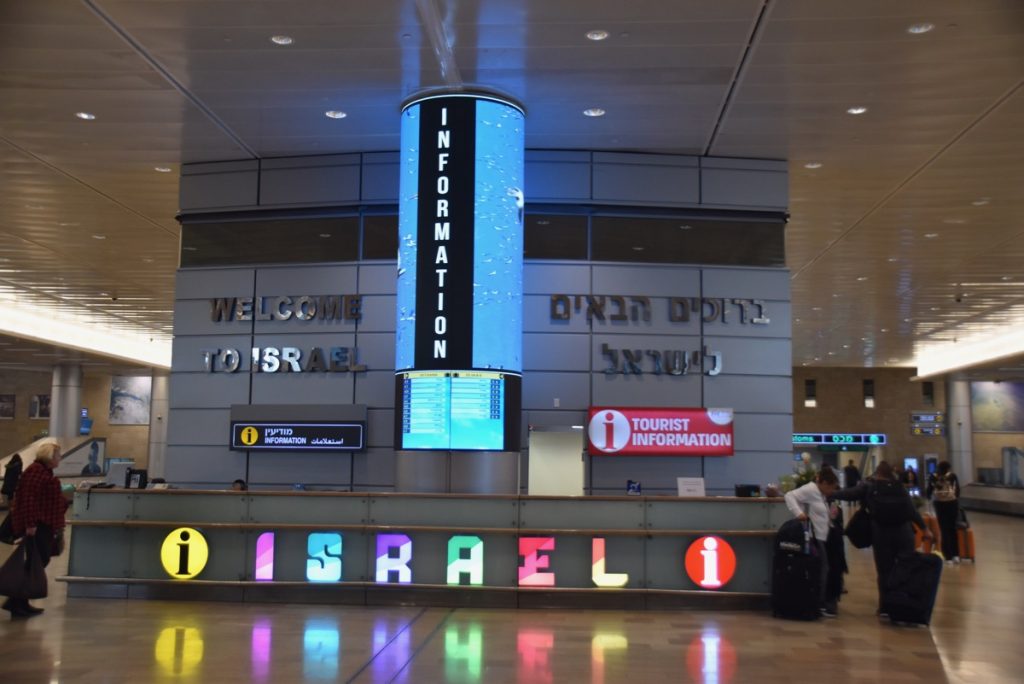 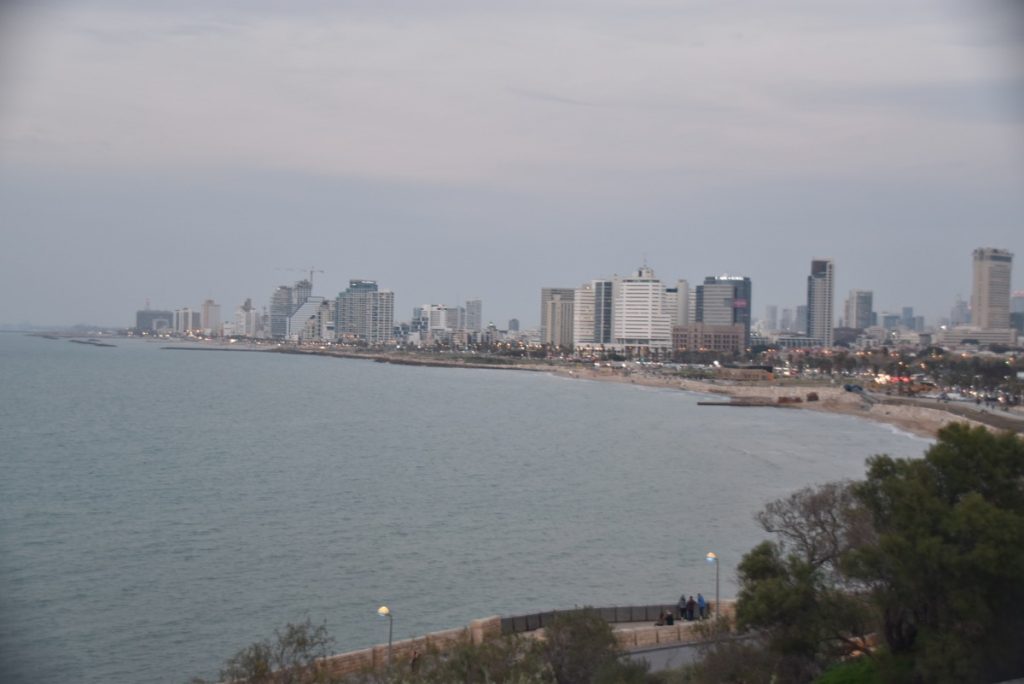 Today was our first full day here in Israel. The weather was nice and sunny, and highs near 70. We spent the entire day in the Shephelah (lowlands) of Judah.

After a great breakfast on the 7th floor of our hotel (with a great view of the Med Sea), we left at 7:30. Our first stop was to Tel Gezer. Located along the Aijalon Valley, Gezer was both a Canaanite and Israelite city. We saw ruins from the Middle Bronze (Canaanite) period. This included a massive fortification tower, wall, and chambered gate. We also saw a replica of the Gezer Calendar. We read from Ecclesiastes 3 about the “seasons of life.” We also saw the water system. At another part of the site we saw ruins from the Iron Age (Israelite) period. This included a city gate built by Solomon (1 Kings 9). The city was given to Solomon’s wife, perhaps Pharaoh Siamun. Before leaving the site we saw the standing stones of Gezer, most likely part of a Canaanite cultic center.

Traveling south, Beth Shemesh was our next site. Located along the Sorek Valley, we stood on top of the site as we remembered that Samson was from this area (, from Zorah across the valley, Judges 13-16). He married a Philistine from Timnah only a few miles down the valley. We also read from 1 Samuel 6 about how the Philistines returned the Ark of there Covenant here. We saw the newly-discovered Israelite ruins on the other side of the road. Also, some in the group descended down into an ancient cistern.

Located along the Elah Valley, we drove to Socohnext. We climbed this unexcavated site in order to get a good view of the suggested battle field of David and Goliath. We read from 1 Samuel 17. The story unfolded before our very eyes! God still helps us win our “battles of life” when, like David, we place our total confidence and faith in him.

Continuing southward, the next site was Beit Guvrin. After grabbing a light lunch here, we visited the Roman site first. Here we saw an amphitheater. Near the Old Testament site of Mereshah (the original name of the city and home town of Micah the prophet. ), we descended down into a columbarium. This caves was the home for pigeons. We also read from Micah 1 and 5.

Our last site of the day was Lachish. This was first a Canaanite city taken by Joshua in 2 days (Joshua 10). Later, King Rehoboam of Judah re-fortified this city (2 Chronicles 11). Lachish was a city that was seized by Sennacherib and the Assyrians (2 Kings 19-20, 2 Chronicles 32, and Isaiah 36-37) and later completely destroyed by the Babylonians. We saw a replica of the Lachish Letter #4 that matches perfectly with Jeremiah 34:7. Climbing the site we saw the double stone walls and gates, and the palace area.

From here we drove about 50 minutes to Beersheba in the Negev. We checked into our hotel and enjoyed dinner together. After this great meal, we gathered for a brief time of worship and reflection. It was a great first day here in Israel! 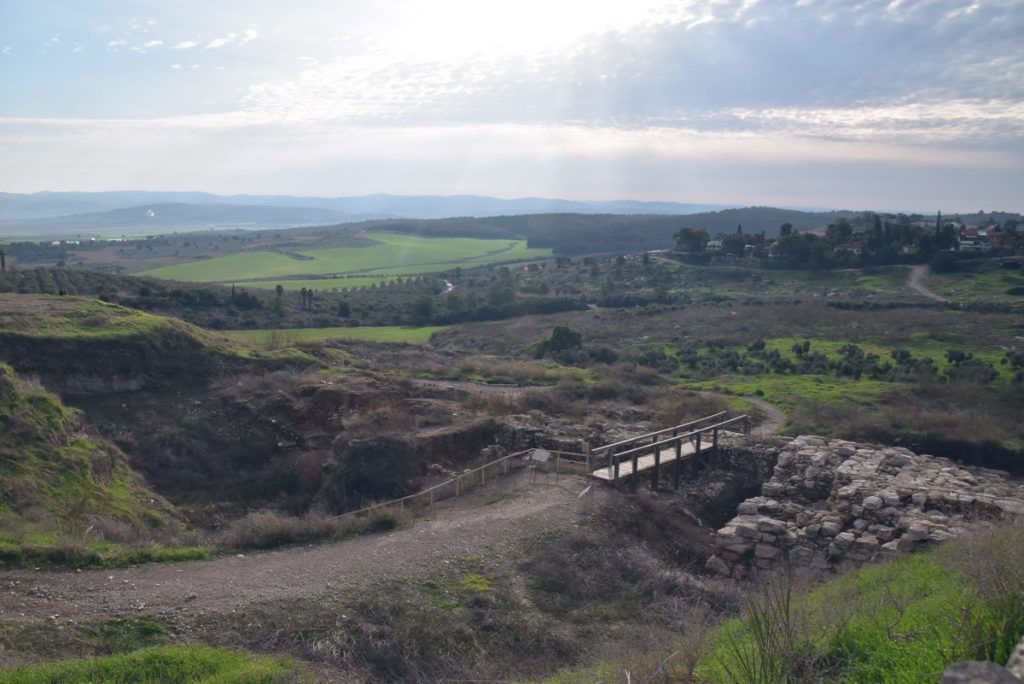 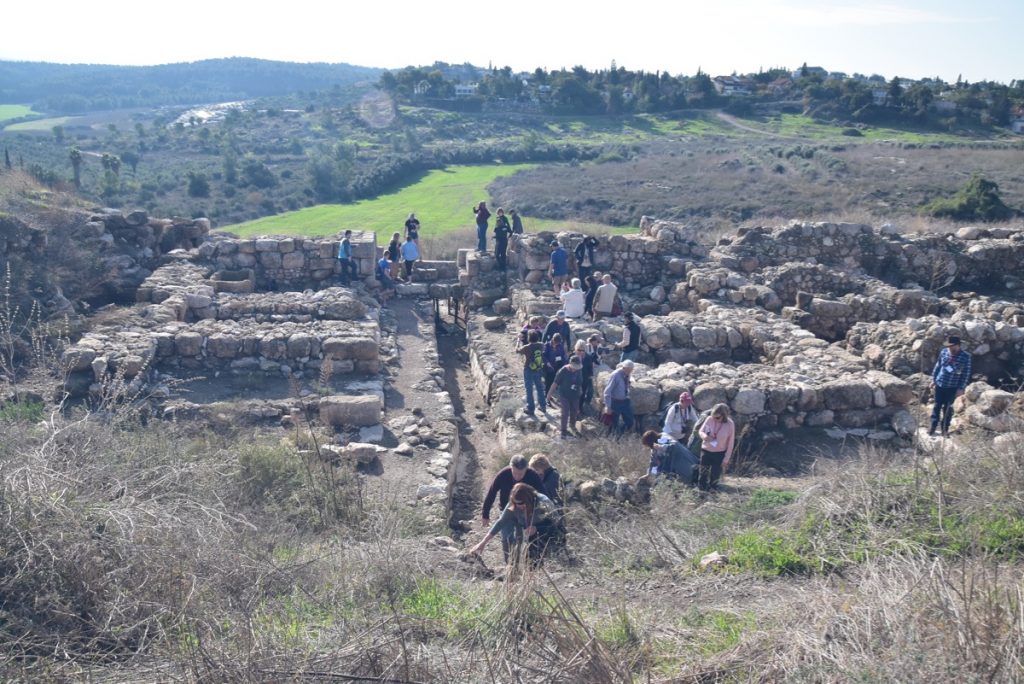 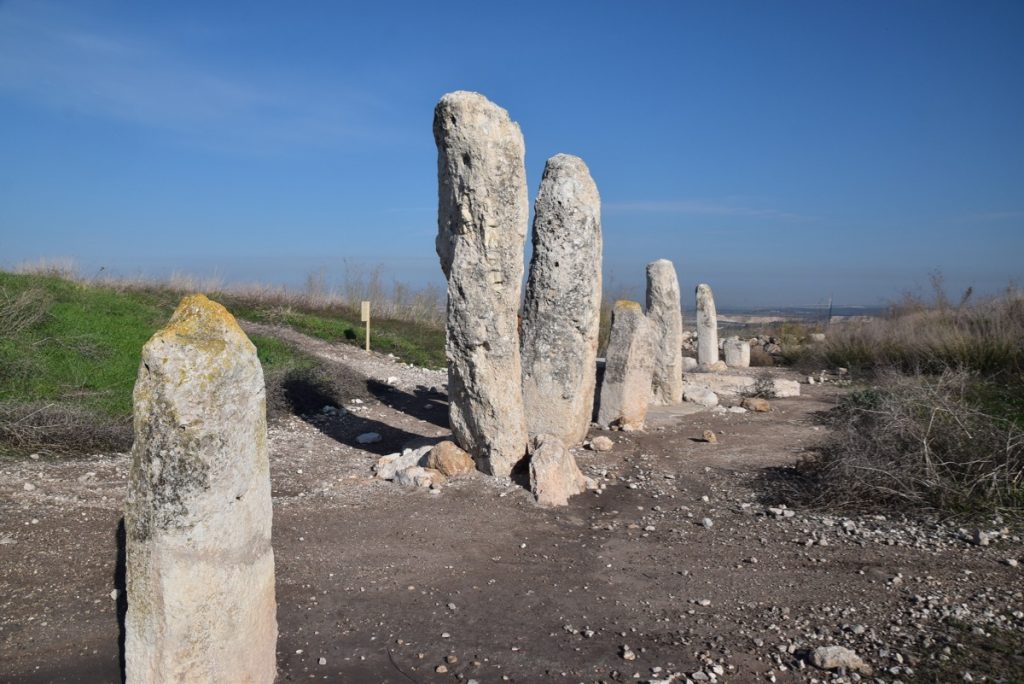 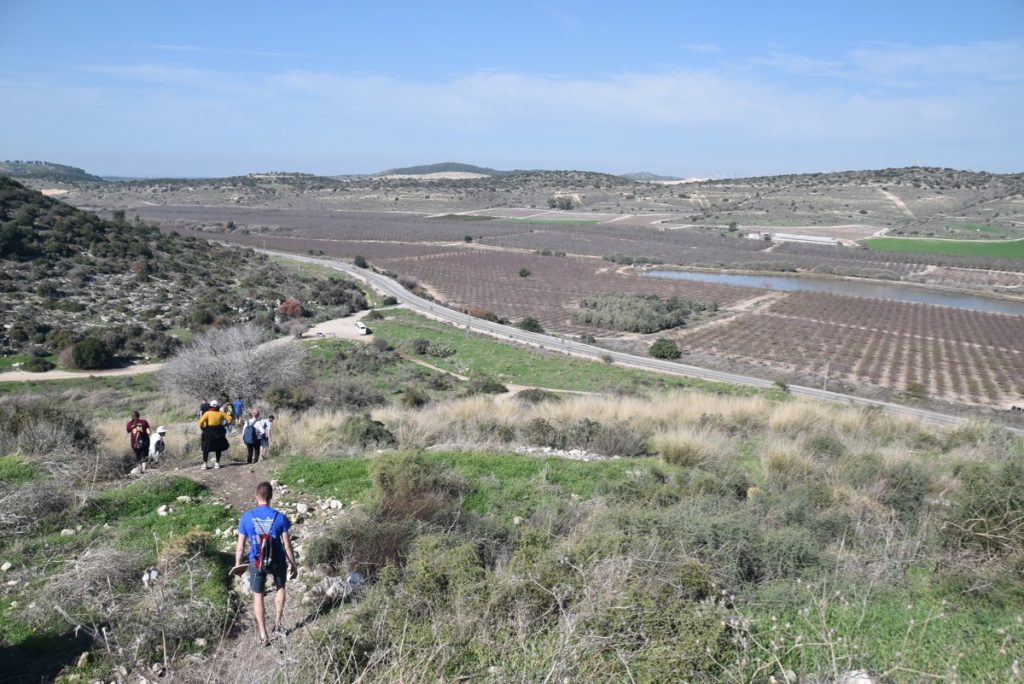 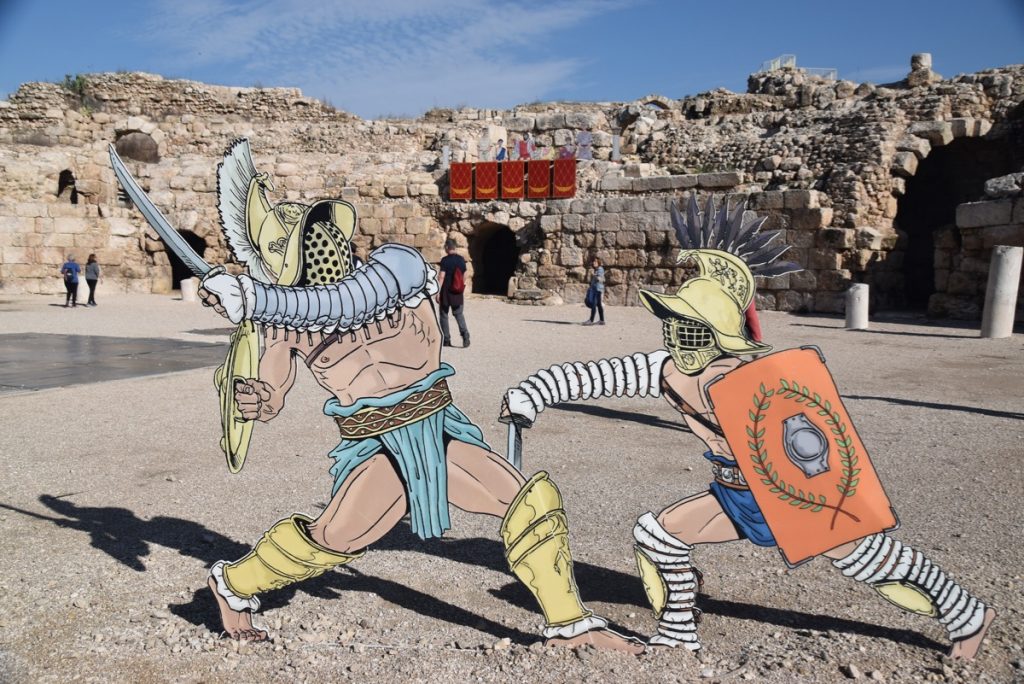 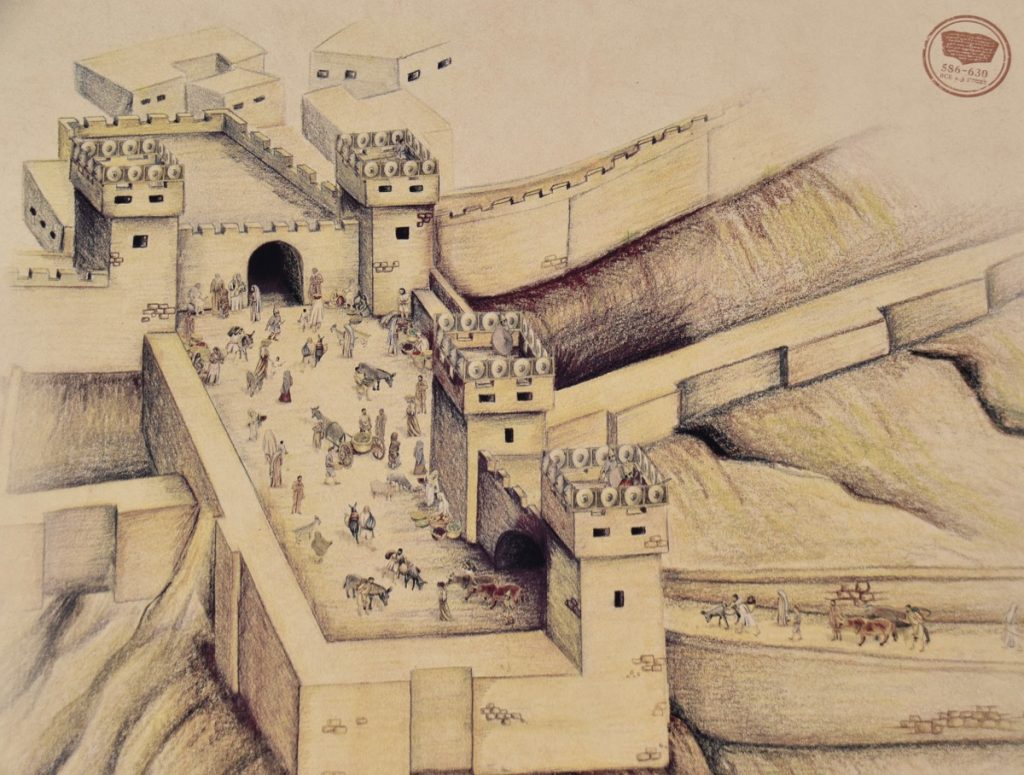 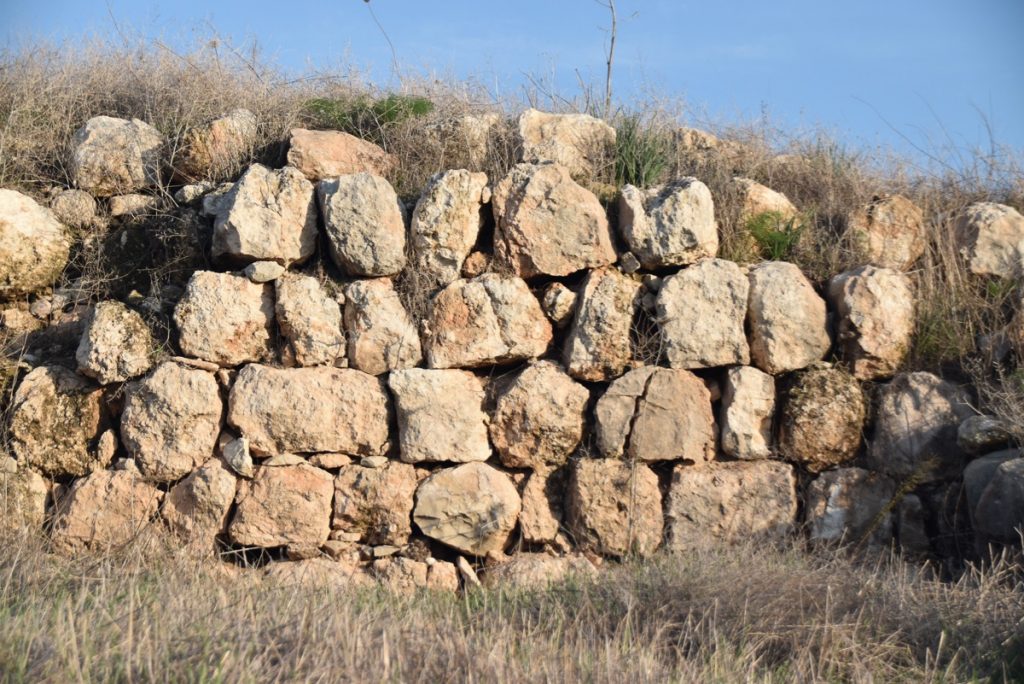 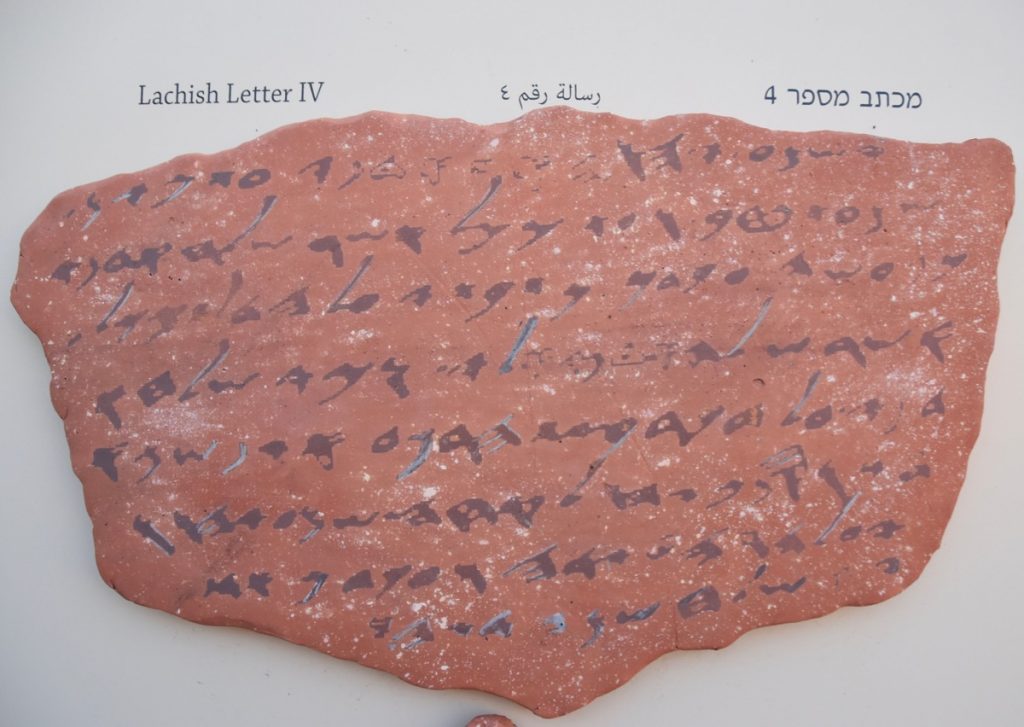 On this second full day here in Israel, we once again enjoyed sunny and mild weather, with highs near 70. We spent the entire day in the Negev in the southern region of Israel.

Following another full breakfast, we departed our hotel about 7:30. The drive to Tel Beersheba was a short one. Upon arriving at the site, we immediately saw a replica of the 4-horned altar that was found here. Walking to the top of the site, we saw a deep water well. Although this does not date to the time of Patriarchs, we read from Genesis 21 about how Abraham made a treaty here. Later, Isaac (Gen 26), and Jacob (Gen 49) would come here too. Elijah (1 Kings 19) stopped by here on his way to Mt. Horeb/Sinai. We reflected upon Psalm 23 and the “trough/cup that overflows.” Praise God for His goodness that continually overflows into our lives in the dry seasons of life. Among the ruins we also saw a Solomonic gate, and 4-room Israelite houses. We left the site by walking down through the impressive cistern system.

Driving south through his arid area, our next stop was Sde Boker. This is where David Ben Gurion and his wife Paula are buried. Shlomo shared a bit about the life of Israel’s first Prime Minister in 1948. The view of the Zin Desert was spectacular! We even drove down through this canyon and hiked back to the water falls. About two-thirds in the group hiked to the far rim of the canyon. The ascent was steep but rewarding. We enjoyed popsicles at the end of this hike.We ate lunch nearby at Avdat.

From here we drove to the northeastern area of the Negev and to the site of Tel Arad. This was a one-level Canaanite city that was later on taken by Joshua (Josh. 12) although it’s Canaanite king prevented Moses and the Israelites to pass by this region (Numbers 21). On the top part of the tel (the citadel), we saw what’s left of a false temple built by Judeans. Kings like Hezekiah and Josiah brought an end to this practice (2 Chr. 34). Upon leaving the site, we walked down through the lower Canaanite part of the city.

We drove east from here through the modern city of Arad to Hanokdim. This is a Bedouin-like camp serving as our hotel tonight. First, we enjoyed a camel ride. No one fell off! :). We also enjoyed dinner and listening to a Bedouin man talked about his customs. Before retiring for the evening, we sat around a campfire and enjoyed the star-lit sky.

Following an unique experience here in the Judean Desert, we spent all day seeing sites located along the western shoreline of the Dead Sea. The morning weather provided sun but it was overcast in the afternoon, with high temps about 65. We read Psalm 18:1-2 (metzada = fortress) as we departed after breakfast.

Our first site was Masada. While this stand-alone mountain probably served as the stronghold for David (1 Samuel 24), it was Herod the Great (37-4 BC) who built this incredible palace-fortress in the 30s BC. We arrived at the western entrance to the site where 23 in the group climbed the Roman Ramp to the top. Others bussed around to the eastern side and ascended to the top via cable car. The site is filled with ruins from the 1st century, with palaces, casemate walls, cisterns, and a synagogue. In 70 AD, 967 Jews made Masada their protective fortress against the Romans. The story of Masada involves all but five of the Jews taking their own lives. Josephus records this history. Leaving the site, most took the cable car down while about 10 hiked down the Snake Path.

We drove north from here about 15 minutes to Engedi. On the way, we red from Ezekiel 47 about the Dead Sea becoming fresh. Arriving at Engedi, we walked back into Wadi David, the canyon that flows with water all-year around! We read from Song of Songs 1, 2 Chronicles 20, and 1 Samuel 24. In this last text we find David trying to find refuge from King Saul. David spares his life and returns back to the stronghold (Masada). Many in the group walked back to see the water falls. It is a beautiful place. We saw a bunch of coneys (Psalm 104) along the way.

Our last archaeological site to see today was Qumran. Located on the northern end of the Dead Sea, this site is Israel’s most significant site namely because of the Dead Sea Scrolls found here in 1947. Located in 12 caves, over 900 fragments of Scriptural and sectarian texts were found. These scrolls were written by the Essenes. Following lunch here we walked through the ruins. In front of Cave 4, we read from “Psalm 151” (an extra psalm found in 1956) and Psalm 19. We celebrated the perseverance of God’s Word here and the joy, direction, and hope it offers us!

We ended the day at the Dead Sea. This unique body of water (the north end is 35 miles long and about 900 feet deep) consists of 33% salt and minerals. Many enjoyed floating effortlessly. Coating ourselves with mud was also fun!

With drove a short distance from here to our kibbutz-hotel (Almog). We enjoyed an early Shabbat dinner followed by a free evening. So far the weather has been great, but we are expecting some rain the next two days.

The biblical city of Jericho is a very important archaeological site. It provides us “confirmation” of the biblical text of Joshua 6. The walls we see at the southern end were indeed the same walls Joshua saw!  The bible is accurate in every detail!

In this video, Dr. John shares personal words of greeting from here as well as details about the archaeological evidence supporting the Bible.