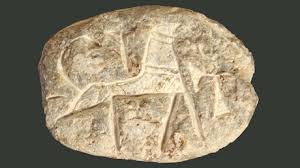 Happy New Year to all who follow the ministry of Biblical Israel Tours.  Last year was a great year to be in Israel.  Humbly, God allowed me to lead six (6) study tours to Israel (six more tours are scheduled both in 2014 and 2015).  If you were part of one of the groups this year, thanks for joining us!  You now know firsthand how safe Israel is.  More than this, you now know how life-changing a trip to Israel actually is.  It truly is an investment of a lifetime that will reap “spiritual dividends” the rest of your life.
But as we all turn our calendars (our smart-phones, ipads, tablets do this automatically) to 2014, 2013 was a great year archaeologically!  So before we do our “out with the old, in with the new” routine, it’s worthwhile to take a peek back to what archaeologists found this past year.  In other words, there is some old stuff that has been found that has the archaeological world buzzing!
Thanks to a recent article in Christianity Today (“Biblical Archaeology’s Top Ten Discoveries in 2013”), a list of the most important finds related to the Bible is offered.  The list includes the following discoveries:  Here’s the CT list and article (shortened and edited).  I share my own my own personal insights in “parenthesis” following each discovery description.

1. The Egyptian Scarab of Khirbet el-Maqatir

This tiny 3/4-inch long amulet, carved in the familiar shape of a dung beetle (picture above), has been dated to the Late Bronze I period, 1550-1450 BC. Its discovery in the remains of a fortress at Khirbet el-Maqatir, nine miles north of Jerusalem, strengthens the case being made by the excavators that this site is the real location of Ai, the city destroyed in Joshua 8 (Dr. Bryant Wood is the head archaeologist.  Also found was part of a stone socket of a Late Bronze gate.  This was the third stone socket found since the initial year of digging in 1995).

Ancient winepresses are found all over Israel. The fact that this winepress is one of the largest, and is located near one of the most famous vineyards of the Bible, makes it of interest.  1 Kings 21 tells the story of how the evil Queen Jezebel plotted with her husband, King Ahab, to eliminate Naboth and convert his vineyard to a garden for the king’s palace (Although Jezreel is not an impressive rounded tel, it’s exciting to see renewed interest in this biblical site).

3. The Wine Cellar of Tel Kabri

Working double shifts, excavators pulled 40 wine jars from a storage room in the ruins of a palatial building eight miles northeast of Akko. The capacity of the jars, more than 500 gallons, would fill about 3,000 bottles of wine. It’s Israel’s oldest and largest wine cellar. This Canaanite palace—dated to about 1700 BC—was already known for the fragments of rare Minoan-style wall and floor frescoes discovered there in previous years (Even though I am not a wine drinker, this is quite impressive  Whoever owned the vineyards in biblical history were considered prominent.  See Isaiah 5).

The palace of King David, as some reports described it, was probably not used as living quarters by King David. But the palatial ruins and nearby storehouse excavated in the seventh and final excavation season helped confirm Khirbet Qeiyafa’s identification as a heavily fortified Judahite city from the time of King David. Overlooking the Elah Valley, where David famously confronted Goliath, Khirbet Qeiyafa was clearly constructed to help protect Jerusalem and the Judean highlands from the lowland Philistines (A few years ago an important Israel/Iron Age inscription was found here.  The discovery of this fortress causes us to reevaluate the positioning of the Philistine army in the 1 Samuel 17 story.  The area of Qeiyafa can be seen from Tel Azekah, although the ruins cannot).

5. The Sphinx of Hazor

The front paws of a sphinx, found this past summer at Tel Hazor, have the name of Menkaure in an inscription written between them. Menkaure is a fourth-dynasty pharaoh who built the third and smallest of the great pyramids on the Giza plateau about 1,000 years before the Exodus.  No other sphinx statues have been found outside of Egypt in the eastern Mediterranean. This statue fragment was found in a destruction layer dated to the 13th century BC, the period of the Judges. Judges 4 tells the story of Deborah and the uprising against Jabin, Canaanite king of Hazor (The Egyptian presence and influence in places like Hazor and Bethshean indicate the importance of Israel as the “land between” in the context of the ancient geo-political battles for this area).

A gold medallion, four inches in diameter with a menorah depicted on it, was found in the ruins of a Byzantine-era structure just 50 yards from the southern wall of the temple mount. Thirty-six gold coins were also found in the cache, along with gold and silver jewelry.  This spectacular find dates to the seventh century AD, later than the biblical period. But they may bring new understanding to this dynamic era which saw the Persians wrest control of Jerusalem from Roman Christians, raising the hopes of Jews who wanted to see the temple rebuilt. But then the Christians regained control of Jerusalem, only to lose it again to Muslim conquerors, and a mosque was built on the Temple Mount (I wonder how much this gold would be worth at today’s values?).

7. Roman Legion Base in Galilee

Archaeologists used high resolution satellite photography and ground penetrating radar to identify the location of the headquarters used by the Sixth Roman Legion between 120 and 300 AD. The site is between Tel Megiddo, one of the most important sites of Biblical Archaeology, and the previously discovered remains of one of the earliest known Christian houses of worship. Plans are being made to develop the area into a major tourism destination (Ceramic tiles found in Caesarea Maritima, built about 18 BC, suggest that the legion was at that time based in in Judea. The Tenth Legion was used in the destruction of Jerusalem in 70 AD).

Archaeologists working just outside the walls of the Old City of Jerusalem, near the Zion Gate, are uncovering a mansion from the time of Christ. The unusually well-preserved lower levels of the home may reveal new information about first-century life. The finds so far include a bathroom. The home was probably occupied by a family of temple priests (This present excavation can be seen from the sidewalk outside the Old City right below Zion’s Gate.  I’ve seen the dig on each of my fall Israel trips).

9. An Extra Destruction Level at Gezer

In the process of removing a tenth-century Iron Age wall to get to a Late Bronze Age destruction level dating to around 1400 BC, excavators at Gezer found a previously unknown destruction levelbetween the two periods. Gezer is a benchmark site in Biblical Archaeology. This excavation and two additional projects going on at the site—a survey of the surrounding area and an excavation of the Gezer water system—should ultimately reveal new information about life before and after the time of the Israelite settlement (I include Gezer on some of my tour itineraries, even though it is difficult to get there.  Visit the site takes us back to the heart of the OT period!)

10. Stone pyramid under the Sea of Galilee

This cone-shaped pile of rocks raised a lot of questions during 2013. How and why it’s located underwater near the southern outlet of the lake is so far a mystery. Tentatively dated to around 2000 BC, or earlier, it may be connected to a nearby excavated site called Khirbet Kerak. Underwater archaelogists hope to begin studying the rocks to see if they can discover why they are there (Unfortunately when we swim in the Sea of Galilee before and after certain tour days, we haven’t gone out and deep enough to see this.  This unique rock formation was found on the southern end of the lake, near to where the lake exits into the lower Jordan River).

In the next post, I hope to share more insights into the importance of the Egyptian scarab discovery at Khirbet el-Maqatir, especially as it relates to the Joshua’s Conquest.