Jerusalem!  What a city.  A spiritual home for many.  It’s a city of history, culture, and religion.  It’s a city mentioned about 750 times in the Bible (in contrast to zero times in the Quran, incidentally).  It was a city captured by David from the Jebusites (2 Samuel 5), protected against Sennacherib and the Assyrians by Hezekiah (2 Kings 20, 2 Chronicles 32), rebuilt by Nehemiah after the Babylonians destroyed it a century before (Nehemiah 2-4).  It was the place of the largest Temple known in the region, built by Herod the Great (a project started in 20 BC).  It as where Jesus of Nazareth was crucified, buried, and risen.  It was from the Mt. of Olives overlooking the city where Jesus ascended into heaven (Acts 1).  A generation later, it was a city destroyed by the Romans in 70 AD.

Today Jerusalem is the heart and soul of both Jews and Christians.  By the Western Wall (The Kotel, you can see a “live” video stream of this prayer area), people from all over the world come and pray. While it is said that Tel Aviv is a city where people go to play, Jerusalem is a city where people go to pray. Jews pray for the coming of the Messiah the first time, while Christians pray in the name of the Messiah already come, Yeshua.  He is the one who is coming again. 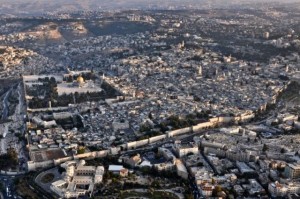 It is a city of limestone.  By rule of law, every building needs to be covered with a facade of white limestone, giving uniformity to buildings and homes alike.

Jerusalem 360 is a recently-developed way of seeing the city up close and personal. Of course being there is the very best to come to know feel Jerusalem firsthand.  But Jerusalem 360 is the next best thing.

I invite you to click HERE to see Jerusalem in its panoramic glory.  Warning: you can spend hours exploring the city through this advanced technology.  Yet I at least invite you to take a peak at the city loved by so many!