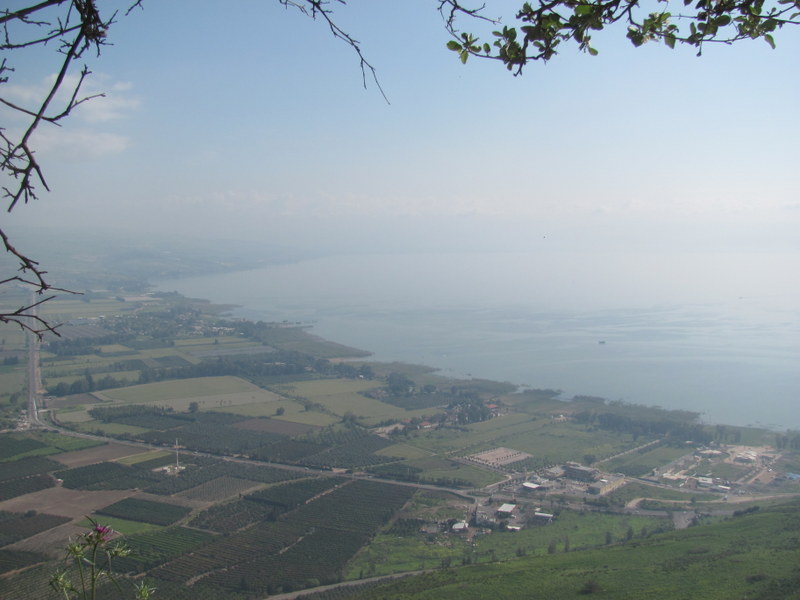 It was a nice day again (a few clouds, with temps between 65-70). We spent the entire day around the Sea of Galilee area. Starting off from the hotel with Matthew 13 and a brief word about the 30 recorded parables (mashal in Hebrew) that Jesus used in His teaching, 12 ‘hikers’ were dropped off for the hike up Mt. Arbel, a 800 foot mountain that overlooks the entire NW corner of the Sea of Galilee. With the rest bussing around the other side and then hiking to the top from there, we gathered together for a spectacular view.

Next, we drove through Tiberias to Magdala. Here, we saw the impressive yet modest synagogue. It is one of only seven that have been found so far that date to the time of Jesus (1st century AD). It was covered with only about a foot of debris for 2,000 years since it was destroyed by the Romans in 66 AD.

The other two sites we visited before lunch were cities both condemned by Jesus (Matthew 11). Chorazim is a city with 3-4th century ruins and is located on a hill above the NW corner of the lake. We stepped into the synagogue and talked about the Pharisees and the Moses’ seat (Matthew 23). The city was primarily made with black basaltic stones. Capernaum (“Khefar-Nahum”), located close by but on the shoreline, was the ministry home-town of Jesus. Here we saw another synagogue, but this one being 4-5th century. We read from Mark 1, Luke 7, and John 6 about all the ministries of Jesus that took place here. Leaving this site we drove to lunch. Instead of the usual Israeli “sandwich” (the falafel), we enjoyed a “St. Peter’s Fish” lunch in Magdala.

Following lunch we saw the “Jesus Boat” (discovered in 1986 in the mud of the lake). We also enjoyed a boat ride on the Sea of Galilee. It was a time of worship, Scripture (Mark 4, Matthew 14) and reflection.

Yardenit was the next experience. Located on the southern end of the Sea of Galilee, 16 in the group re-affirmed their faith commitment by being baptized in the Jordan River. It was a special and meaningful time for all. A number of Nigerians came forth to also be baptized. Nearby is the Kinneret Cemetery. Here we heard the story and poems of a certain “Rachel” from the Ukraine. She was an early pioneer to the land in the early part of the 20th century AD. Her poems are touching. Her picture will be placed on the new Israeli 20 shekel bill this year.

The last encounter of the day was the Mt. of Beatitudes. We listened to Matthew 5 in both Hebrew and English. About half the group then walked down the hillside to almost the water’s edge. It was a great way to end the day.

We drove back to our hotel for dinner and a free night. What a great of day of focusing on Jesus in this region of the Galilee.

We plan to visit the precipice of Nazareth, Megiddo, Mt. Carmel, and Caesarea before driving to Jerusalem!