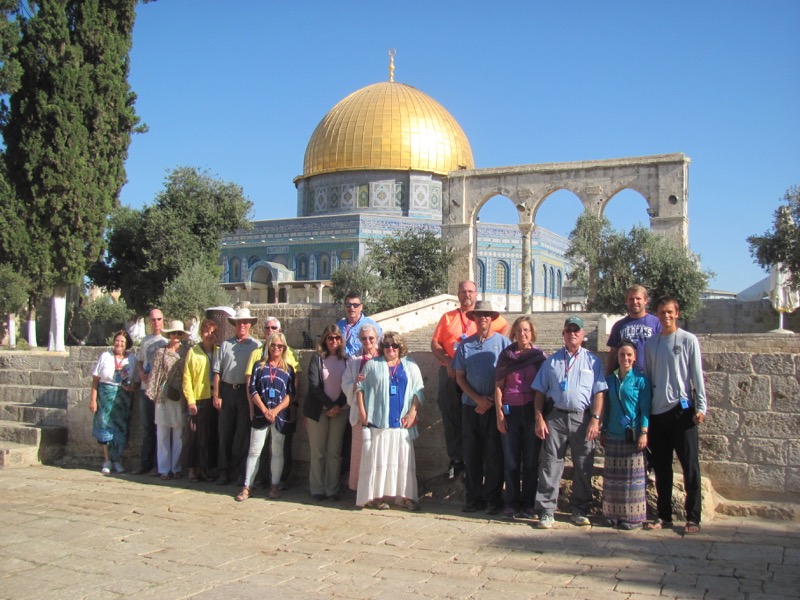 We left the hotel once again just after 7:30 this morning. Predictably, it was another sunny and pleasant day, with highs in the upper 80s. Our first destination was the Temple Mount. We ascended the bridge to the area where both Solomon’s and the 2nd Temple once stood. The Temple Mount is a very large area, holding up to 300,000 people at once. It covers about 20 football fields. For Jews, it is the holiest place. For Muslims, it is the third most holy place. We saw the Dome of the Rock, the al-Aqsa Mosque, and the inside of the Eastern Gate.

Walking through the Muslim Quarter and then out the Damascus Gate, we arrived to the Garden Tomb.   This is an alternative location for the crucifixion and burial site of Jesus. We enjoyed a Communion & Worship service here.

After driving to Ramat Rachel (which overlooks Bethlehem) for lunch, we drove back to the Jerusalem and specifically the City of David excavations. It was David (2 Samuel 5) who took the city from the Jebusites. Later, King Hezekiah (2 Kings 20 & 2 Chr. 32) withstood the Assyrian attack by strengthening the walls of the city and by building a water tunnel in order to bring water into the city. We saw the excavations of David’s palace and the Israelite ruins on the eastern slope of the city before walking down through Warren’s Shaft and eventually to Hezekiah’s Tunnel. Everyone in the group walked through this 1,720 foot tunnel still flowing with water from the Gihon Spring (where Solomon was inaugurated as king). Exiting the tunnel, we sat on the steps of the Siloam Pool while hearing the story from John 9 about the blind man healed by Jesus.

From here, most in the group walked back to the SW corner of the Temple through the underground “drainage channel.” This channel ran underneath the Roman street.

Exiting at the SW corner (in what is called the “Davidson Center“), we saw the massive Temple stones brought down by the Romans in 70 AD.  We also literally walked on the Roman street used by Jesus. Finally, we climbed the southern steps of the Temple and humbly considered all the stories that took place in the Temple (Luke 2, 18; Mark 12, 13; Acts 2, etc…).

We drove back to the hotel for dinner and an optional walk to Ben Yehuda Street, taking in some of the modern Israeli life here in Jerusalem.

It was a great last day of “official” touring. We are looking forward to our free day tomorrow.