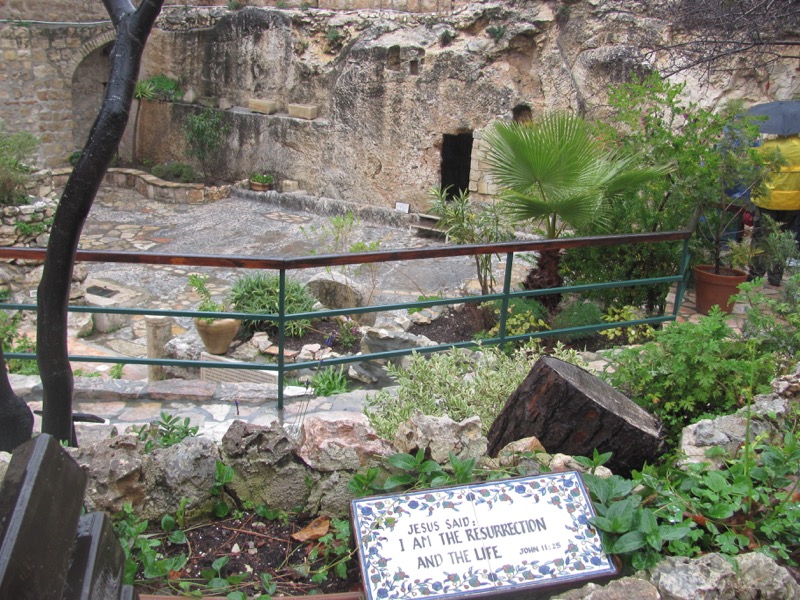 This was our last day here in Jerusalem.  With a change of plans (with flights canceled and new hotel arrangements made for Tel Aviv tonight), we checked out of this hotel before loading on the bus.  The weather would be rainy and cold, with even occasional snow.  Uniquely, there were also even a few glimpses of blue sky and sun on occasion too.

Our first stop was the Garden Tomb.  This is the most recent traditional site for the crucifixion and burial site of Christ.  Here we saw the suggested tomb of Christ.  We also shared in a brief Communion service.

From here we drove to the City of David excavations.  We first saw a movie that helped connect the dot between the biblical events that took place here and the archaeology.  We saw the primary area of excavation of David’s palace.  We remembered the stories of David conquering the Jebusites (2 Samuel 5), and Hezekiah who withstood the Assyrian siege of the city (2 Kings 20, 2 Chronicles 32).  It was Hezekiah who chiseled out a 1,720 foot water tunnel.  4 in the group eventually would walk through this, while the others walked through the “dry” Canaanite tunnel.  We also walked through “Warren’s Shaft.”

The Siloam Pool is located at the southern end of the City of David.  Here we read (in dramatic form) the story of the blind man from John 9).  From here, some walked through the Herodian drainage channel (under the Herodian street), while others bussed to the Davidson Center and the southern wall excavations.  Here both groups converged at the SW corner of the Temple Mount.  We saw the massive Herodian street and “Robinson’s Arch” (named after the explorer who discovered it in 1838). Finally, we ascended the Temple steps and considered the many stories from the New Testament that took place here (Mark 12; Luke 2, 19; John 7, 10; Acts 2 to name a few).

We ended the day by walking up to the Jewish Quarter for a late lunch and some last-minute shopping at Moshe’s.  We returned to our Jerusalem hotel, loaded the bags, and drove to Jaffa for our farewell dinner.  What a great “last supper” it was!

We then drove to the airport to confirm the flights home before checking in to a Tel Aviv hotel for a few hours sleep.  The majority in the group anticipate flying home early tomorrow morning.

Most in the group arrived back in the States in the afternoon.  What a great trip this was!  Thanks be to God for the rich and life-changing experiences we had together!