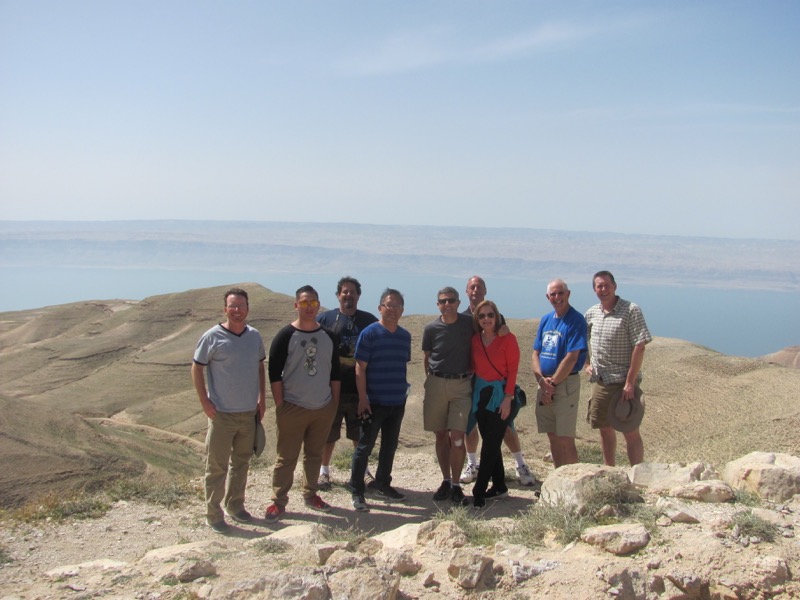 Standing on top of Machearus, Jordan

Today was our last day in Jordan. Checking out at 8 a.m., for the last time we loaded the bus and drove north to Amman. On the way we stopped not only for another panoramic view of Petra, but also three other sites.

Soon after leaving Petra, we made a brief stop to see Shobak, a Crusader castle. We enjoyed a nice view of this 12th century fortress. We continued on to Machearus, a fortress of Herod the Great overlooking the Dead Sea and the location where John the Baptist was beheaded.  On the way, we saw a black iris.  It only blooms for a few weeks in the spring. When we arrived at Machearus, half in the group climbed this fortress. The view of the Dead Sea and Israel was spectacular.  Looking across the Dead Sea, we could see Engedi to the south, Jericho to the north, and even the Mt. of Olives on the western horizon. While the ruins are not well preserved, we read from Matthew 11. It is interesting that the daughter of Arêtes IV (mentioned in 2 Cor. 11) was married to Herod Antipas before Herod divorced her and married his brother’s (Phillip) wife.

Medeba was the next visit.  It is called the “City of Mosaics” due to the wonderfully vivid 6th century AD Byzantine mosaic map seen in the Greek Orthodox church of St. George.  We picked up a quick lunch here too as we walked back to the visitor center.

We continued to Mt. Nebo. The view into Israel was a bit more hazy than this morning’s view from Machearus. While looking into the “Promised Land” we read Deuteronomy 34, and Joshua 1 about Moses’ death and Joshua’s encouraging words.  Ross and Amy also renewed their wedding vows here.  It was a special time!

We then traveled to Amman and enjoyed a farewell dinner at a classic Jordanian restaurant. It was very good.  This followed by driving to the airport for our late night flight (1:15 a.m.) home.

This will be updated later once we arrive back in the States.