Today began early here in Cairo. Leaving the hotel around 6 a.m., we drove to the airport for our 1.5 hour flight south to Aswan. We followed the Nile River below us the whole way. It was sunny with temps about 85 when we landed, rising to a warm 102 later this afternoon (it is supposed to be 104-106 the next to days). Upon arriving, we were met by our Travel Plus agent who helped us with luggage.

Boarding our van, we drove to the Aswan Dam (built in 1902) and Lake Nasser. The lake (formed by the damming of the Nile River) serves as the border with Sudan to the south, and comprises of about 500 square km. The dam was truly a major engineering accomplishment! 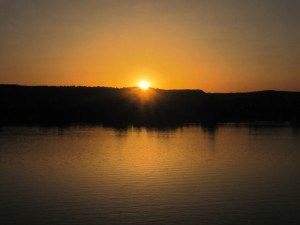 Driving to one of the ports of the lake, we boarded a felucca boat for a short ride to the Temple of Philae (or Isis). This was our first introduction to Egyptian temples. While this one dates relatively late (Greco-Roman), it is massive and quite impressive The Temple itself was reconstructed on higher ground after the dam was built. We saw many reliefs on the sides of the temple. This temple even had a “holy of holies” room similar to the layout of the Jewish Tabernacle (and later Solomon’s temple).

We boarded back on the boat, taking us back to the van. From here we drove to the “unfinished obelisk.” It is located among the granite quarry used in ancient times. Obelisks were chiseled out of the granite here and then “sailed” north (down-stream) to Luxor, Karnak, and Memphis, among other places. It must have been quite a feat given the enormous size.

About 1 p.m. we boarded our cruise ship, the Sonesta. It is a gorgeous 5+ deluxe ship with about 60 cabins. We enjoyed a marvelous buffet lunch before relaxing for a few hours. At 4 p.m., we enjoyed a small motorboat ride on the Nile for about 1.5 hours. We sailed towards on of the cataracts of the Nile. We passed by Elephant Island too. It gave us a taste of what is to come as we sail north to Luxor over the next few days.

Returning to the cruise ship, we enjoyed a brief gathering on the deck. Since tonight brings in Pesach (Passover), we read from Exodus 12-15 about the first Pesach and the Exodus itself. It was amazing for us to read this story from right here in Egypt! We also enjoyed a wonderful sunset on the Nile!

At 8 p.m., we enjoyed dinner together, followed by enjoying the full moon tonight. Spectacular!!