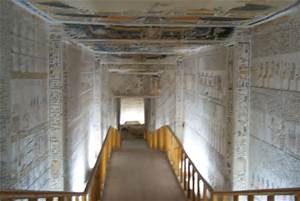 Tomb of Ramses IV (Valley of the Kings)

In order to beat the heat we left at 7 a.m. from our cruise ship. Meeting our agent here in Luxor, we drove in our van to the western bank of the Nile River. We had bright sun all day long, with temps in the 80’s and 90s this morning, rising to about 105 this afternoon.

Our first stop would be the grand Valley of the Kings. From the 16th to 11th century B.C., this valley was used for the tombs of over 60 Egyptian kings and powerful nobles of the 18th-20th Dynasties of Ancient Egypt. To date, a total of 64 royal tombs of kings/pharaohs were found here, including the famous King Tut’s tomb (we’ll see his golden mask and tomb belongings tomorrow at the Egyptian Museum). We went into three tombs: Ramses IV, Thutmose III and Menephat (one of the sons and successors of Ramses II). We connected Thutmose III with the Bible, with him being someone who no doubt Moses and was one of the Pharaohs who oppressed/enslaved the Israelites. Additionally, depending on the Egyptian dating, he may also have been the Pharaoh of the Exodus in 1446 BC (although others suggest Amenhotep II). Regardless, all these tombs were magnificent and still full of the original color.

Next we visited the Temple of Hatshepsut. When she was 15 years of age, she was “Pharaoh’s daughter” who found Moses in the bulrushes. She would end up reigning on the throne herself, along with Thutmose III when he was young. At the temple we saw other colorful reliefs on the wall, including many reliefs of Hathor, the goddess of fertility displayed as a bull.

Still on the western side is the Valley of the Queens. This was the place where queens and other family members were buried. We went into one very well preserved tomb. It actually belonged to a prince named Amen-Khopshef. The prince’s mummified body as never found, but his unborn brother’s fetus was found, intact and mummified in the same tomb.

On our way back to the cruise ship for lunch, we saw the Colossal of Memnon. This was actually a huge mortuary temple built by Amenhotep III, but re-named by the Greeks.

Leaving the boat at 3:30, we boarded the van once again and drove to the famous Karnak Temple. It is the largest one in the world. It compromises actually of a group of temples built by various Pharaohs and dedicated to various Egyptian gods. Pharaohs taking part in the building of this temple include Thutmose III, Seti I and Ramses II. Displayed on the high walls of the temple are reliefs depicting military campaigns. We saw the relief of Pharoah Shishak (Sheshonk in Egyptian records). He is mentioned in 1 Kings 11. Two tall obelisks stand in the middle of this temple right beyond the impressive hypostyle hall. They honor Hatshepsut. Following this visit, we stopped in briefly at a papyrus store. We learned how these ancient parchments were made.

Around dark, our last stop of the day was to the Temple of Luxor. Seeing this grand temple at night was impressive! A 3 mile corridor/road lined with sphinx connected this temple with the one in Karnak. Many colossal statues of Ramses II stand tall here.

This is our last night on the cruise ship. We fly early tomorrow morning back to Cairo for our last day in Egypt.