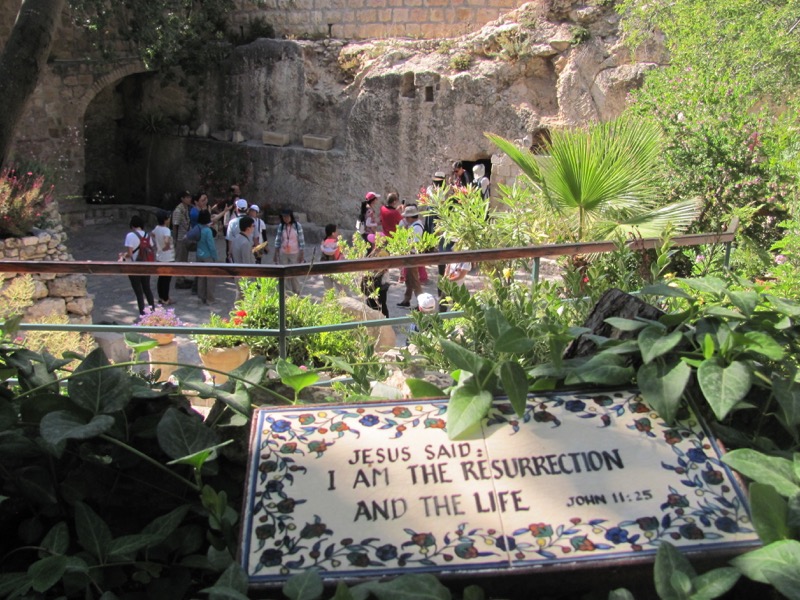 Today was our last day here in Jerusalem! With the sun and nice temps greeting us again (low 80s), we left the hotel and headed straight to what today is called Mt. Zion. We first visited the grave of Oscar Schindler, the German who saved 1,200 Jewish lives during the Holocaust.  He is buried in a Catholic cemetery.

In walking distance is the traditional House of Caiaphas, the High Priest during the days of Jesus. The church here is called Galicantu (the church of the “crowing’). We read from Luke 22 and Psalm 88 about denial of Peter and the crowing of the rooster. Jesus spent a night under Caiaphas’ watch before being handed over to Pontius Pilate.

At the “meeting point” within Hezekiah’s Tunnel

Just to the east is the City of David. This was the city of Jebus that David captured (2 Samuel 5). After seeing the area from an observation platform and watch a 3D movie about the City of David, we descended down through the excavations. Dr. John dug here back in 1982. We could see part of David’s palace as well as other house structures further down the eastern slope of the city. We also saw Warren’s Shaft, originally thought to be (but no longer held) to be the “shaft” up through which Joab (David’s general) infiltrate the city. We also remembered the story of 2 Kings 20/2 Chronicles 32 as well, as Hezekiah re-fortified the walls of the city and cut out of rock a 1,720 foot water tunnel when he learned of the Assyrian approach to the city. As we made our way down to the Gihon Spring, about half in the group walked through the water tunnel while others walked through the “dry” Canaanite tunnel.

Both groups converged at the Siloam Pool where we read John 9 in dramatic form. This was where Jesus sent the blind man to be healed. We also sang a song here and prayed for healing.

Before lunch in the Jewish Quarter we visited the southern wall excavations of the Temple. Here we saw the huge Temple stones on the Roman pavement (brought down in 70 AD), “Robinson’s Arch,” and the pinnacle of the Temple. On the Temple steps we remembered all the stories related to what happened here (Luke 2, 18; Mark 12, 13; John 10; Acts 2, 4). We felt privileged to walk up the very same Temple steps as so many before, including Jesus!

We ended the day with a very special Communion Service at the Garden Tomb. This is one possible location for both the crucifixion and burial site of Christ. We rejoiced in the power of the resurrection!

We returned back to the hotel for our farewell dinner. It was a great time of fellowship! We retired early since the flight home is at about 5 a.m. tomorrow morning. We plan to get up early for the drive to the airport.

What a wonderful trip this was! Praise be to God!

We plan to arrive back to the States. We are flying to Frankfurt, Germany first before the direct flight back to Seattle.