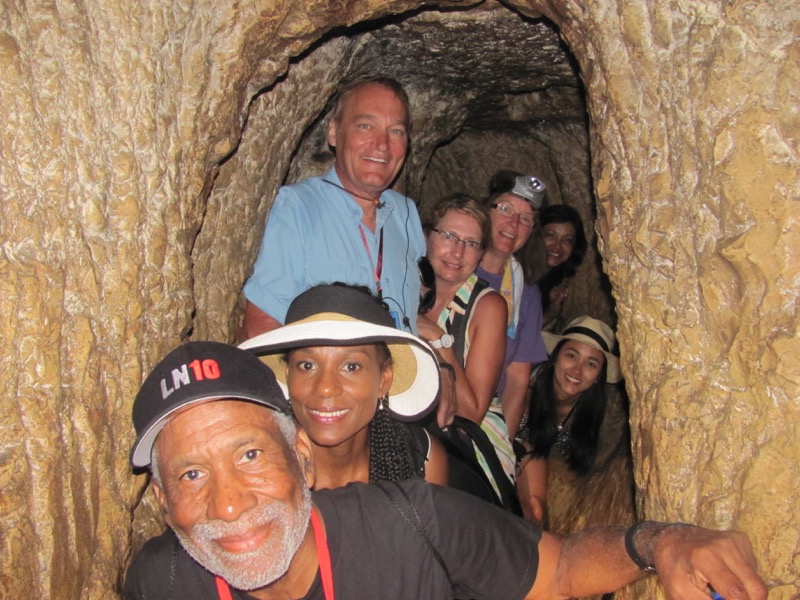 At the half-way point in Hezekiah’s Tunnel

Today was our last day in Jerusalem. With sunny skies and temps eventually in the high 80s again, the day started by driving to the City of David. This is a massive on-going excavation. Called the city of Jebus in the days of Joshua, David conquered the city and built a palace here. Among the excavations we saw the palace of David, house structures, even a stone toilet. We walked down through Warren’s Shaft to the Gihon Spring, the water source of the city. Some walked through Hezekiah’s Tunnel (1,720 foot water tunnel chiseled out of bedrock between 705-701 BC, 2 Kings 20 & 2 Chr. 32, Isaiah 36-37), while others took the “dry” Canaanite tunnel. Both groups converged at the Pool of Siloam where we heard John 9 read in dramatic form.

The “South Wall” excavations of the Temple Mount

From here, some walked up through the Herodian drainage channel up to the “Southern Wall excavations,” while others bused up to this area of the Temple. The drainage channel was built under the street, upon which Jesus, the blind man, and everyone living in the days of the NT walked. Above this street level was “Robinson’s Arch,” remnants of a bridge used by priests that would have led into the Temple. Walking past the SW corner of the Temple (the “pinnacle,” Mt. 4), we walked up the southern steps of the Temple. These steps would have been used by Jesus, His disciples, Peter (Acts 2), and even Paul (Acts 21) as well. We remembered the stories of others who used these steps (Simeon, Luke 2; Pharisee & tax collector, Luke 18; the disciples, Mark 13:1-2, Luke 21:5), etc…

For the next three hours we enjoyed some free time for lunch and shopping. Some went into the Shorashim store owned by Moshe and Dov, two Orthodox Jews. Moshe shared about His Jewish faith. It was quite interesting. Others went to Oscar Schindler’s grave, the Upper Room, and the traditional House of Caiaphas.

Leaving the Old City at 3 p.m., we met our bus and drove to the Garden Tomb. This place is an alternative site for the crucifixion and burial site of Jesus. Here we enjoyed a time of worship and Communion.

After driving back to the hotel to freshen up, we drove to our Farewell Dinner at the Olives & Fish restaurant. We enjoyed our “last supper” together before saying goodbye to one another. Some are flying home tonight, while others leave tomorrow. Eight in the group travel to Jordan tomorrow.

It was a great life-changing trip of a lifetime! Praise God!

Some plan to arrive back in the U.S.A. from Tel Aviv. Others travel to Jordan and arrive at Petra in the evening.