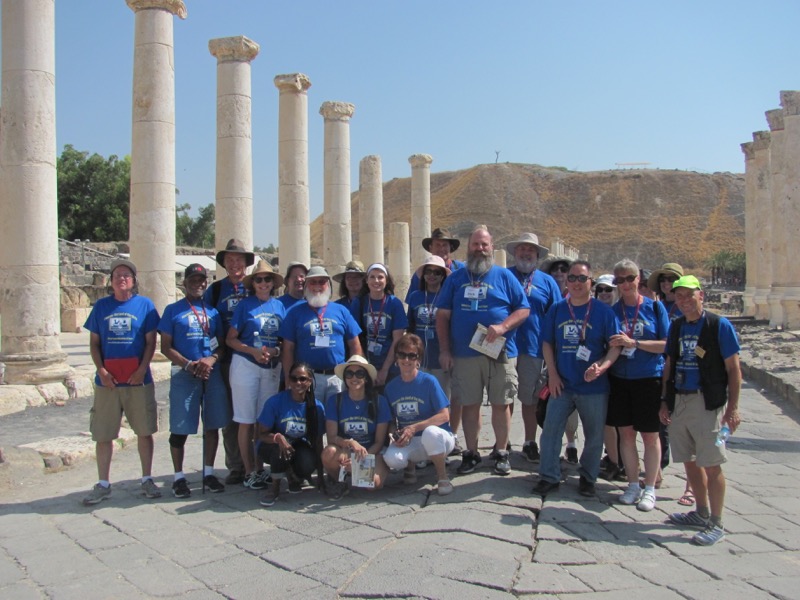 Today we left the area of the Galilee and headed south to Jerusalem. It was another warm day, with temps around 105 in the afternoon. After packing up the bus, we drove to the southern end of the lake and visited the Kinneret Cemetery. Here, Shlomo shared with us about life in the kibbutz as well as about the life of a certain Rachel. She was an early pioneer to the land of Israel. We visited her grave and read a few of her poems.

Driving south through the Jordan River Valley, Beth Shean was our next stop. Located about 20 miles south of the Sea of Galilee, this was both an impressive OT and quite massive NT site. In the Roman city (actually the only city of the Decapolis on the western side of the Jordan River) we saw ancient bathhouses, mosaics, the Cardo (“main street”), many pillars, a public latrine, and a large theater. Some climbed to the top of the OT tel. This is where Saul’s body was hung after his death on Mt. Gilboa (1 Samuel 31). The view from the top is spectacular! 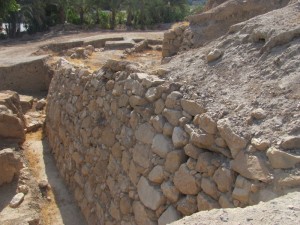 The walls of Jericho

Leaving Beth Shean, we drove westward through the Hill Country of Ephraim/Samaria. This is a unique road through the heart of the country. We passed by places like Shechem/Sychar (Genesis 28, John 4) en route to Shiloh. Along the way we saw many gazelles. Shiloh was where the Ark of the Covenant was for 369 (according to the Talmud). Climbing the tel, we saw ancient walls and an impressive olive press. The high-tech presentation on top reviewed some of the stories that took place here at Shiloh. We read about the life of Eli, Hannah, Samuel, and the capturing of the Ark by the Philistines (1 Sam. 2-4). We even walked down to the place where it is believed the Tabernacle once stood.

Leaving Shiloh, we continued south past places such as Bethel (Genesis 12, 28) and Michmash (1 Samuel 13-14). Driving through the amazing Judean Desert and the Desert of Parath (Jeremiah 13), we descended to Jericho for a late lunch.

Following lunch, we climbed the tel of Jericho. We remembered the many stories that took place in this area (Elijah/Elisha, John the Baptist/Jesus’ baptism, Zacheaus & Bartimaeus, Herod the Great, etc…). Seeing the actual retaining walls of Jericho during the days of Joshua, we also remembered the conquest story of Joshua 6. We celebrated the historicity and truth of the Bible.

On our ascent to Jerusalem, we briefly stopped overlooking the Wadi Qelt & the Judean Desert. We heard the powerful words of Isaiah 40 predicting the coming of the Messiah as well as Psalm 23.

Upon arriving in Jerusalem, we checked in to our hotel, enjoyed dinner, and an optional walk to the Western Wall. We’re looking forward to spending the next few days in this amazing city, Israel’s ancient and modern capital!