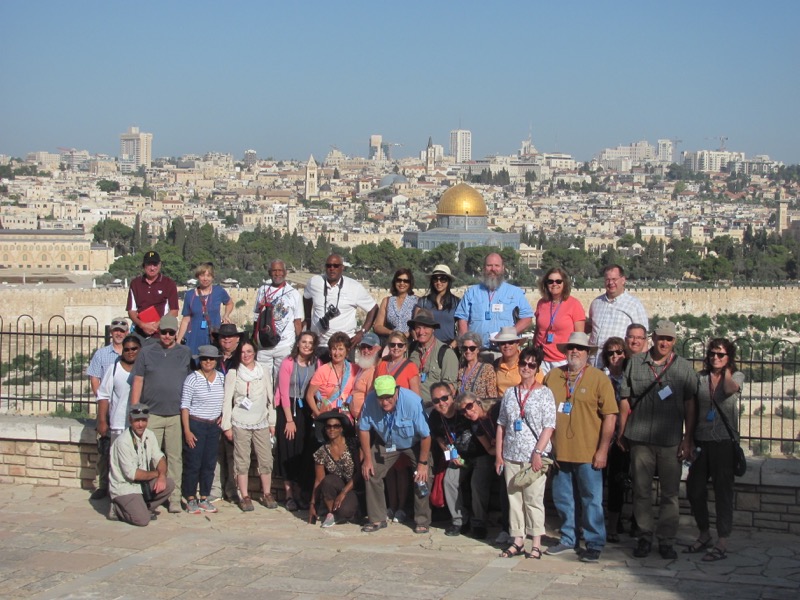 Standing on the Mt. of Olives, Jerusalem

Today was a cooler day here in Jerusalem. With sun and temps in the high 80s, it as very pleasant. Our day began with driving to the Mt. of Olives. The view of the Old City and the Temple Mount is spectacular! We walked down the path that leads to the Garden of Gethsemane. On the way, we stopped at the Dominus Flavet chapel to read passages such as Luke 19, Acts 1, and Zechariah 14. Christ rode into Jerusalem proclaimed as “king” and He will once again return recognized by the world as “King!” In the quiet Garden of Gethsemane, we read from Matthew 14 and Luke 22. We enjoyed a few moments of quiet reflection.

Walking into the Old City through the St. Stephen’s Gate (also called Lion’s and Jericho Gate), the Church of St. Anne’s was our next stop. It actually dates back to the Crusader Period. The acoustics are wonderful, providing an 8 second echo. Next to the church is the Pool of Bethesda (“house of mercy”). We read from John 5 about the healing of the lame man here.

Walking through the Old City we followed the traditional Via Dolorosa (“way of the cross”). We ended at the Church of the Holy Sepulcher, the most likely area where Jesus was buried. Lunch followed here in the Christian Quarter.

Following lunch, we walked out of the Jaffa Gate and boarded the bus. Our next stop was Herodium, a “palace-fortress” of Herod the Great. It was here that he was buried following his death in Jericho. We hiked up the site, we gained a good view of the surrounding area (Jerusalem to the north, Bethlehem to the west, Tekoa to the south, and the Judean Desert to the east). After seeing the Herodian royal archway and frescos, we descended down in and through the cistern system.

The Shepherds’ Fields outside of Bethlehem were our next stop. We enjoyed the breeze as we read from Luke 2 about Christ’s birth. “Just at the right time God sent His Son (Gal. 4:4).” We enjoyed singing Christmas carols in the Shepherds’ Chapel too.

Lastly, we stopped at an olive wood factory and store. We enjoyed a time of shopping here.

On our way home we made a brief stop in Shlomo’s community. With a great view of the city of Jerusalem below, Shlomo shared a little about the current situation between Israel and the Palestinians.

Driving back to the hotel, we enjoyed dinner, followed by an optional walk to Ben Yehuda Street in western Jerusalem. We even got a quick peak of the famous “signature floor” in the King David Hotel!  It was a great first full day in and around Jerusalem!