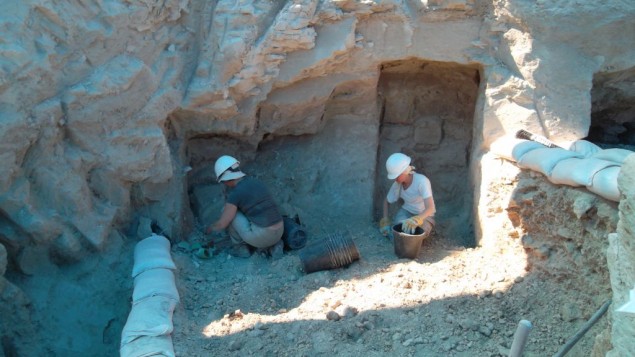 Archaeologists work a Second Temple era chalkstone vessel factory in the Galilee excavated by Ariel University and the University of Malta. (Courtesy of Yonatan Adler)

On every Israel trip I lead, people always ask me, “Was Joseph of Nazareth a wood carpenter or a stone mason?” It’s actually a great question because of the text of Matthew 13:55 (and Mark 6:3). Given the 1st century context and what we know about life in the Lower Galilee region during the days of Jesus, most likely Joseph (and later Jesus) worked more with cutting and shaping stone than working with wood. A recent archaeological discovery seems to confirm this.

The Gospel texts cited above use a specific Greek word, teckton, to describe the occupation of Joseph. The word is often translated “carpenter,” implying that it was an occupation of working with wood.  However, the Greek word simply means builder. Now while Joseph, probably like many in that culture, did have the skill to build shelves doors, and tables using wood, given that most everything else was built with stone (e.g. houses, olive presses, winepresses, floors, streets, ossuaries, and water vessels/jars), I suspect Joseph was more involved in cutting and shaping stone.

The cave was exposed in 2001, with the excavation beginning in August (Courtesy of Yonatan Adler)

This makes perfect sense in light of what was discovered in a recent excavation in the Lower Galilee. At a site called Einot Amatai, what was uncovered was what appears to be a “stone factory” of some kind that dates to the 1st and 2nd centuries AD. Located about half way between Joseph’s “home town” of Nazareth and Cana (where Jesus performed His first miracle, see John 2 and comments below), the site revealed not only a quarry but also a “workshop” where stone items such as bowls, plates, and cups were discovered. And it is within reason to assume that Joseph knew about this stone quarry / factory!

As reported in the Times of Israel by Ilan Ben Zion, the first hints of this being a stone quarry from the 2nd Temple Period began in 2001 when a cave was exposed by locals following the bulldozing of a plot of land. Ben Zion says, “The cave was found in 2001 when residents of the nearby town were bulldozing a plot of land and breached the cavern. A limited survey of the site indicated it may have been involved in the production of limestone goods, but archaeologists only launched a more comprehensive dig this August.”

The five meter squares of the excavation (Courtesy of Yonatan Adler)

What ensued was a full-blown archaeological excavation carried out by a joint effort between Ariel University and the University of Malta. Yonatan Adler of Ariel University, an expert in ancient Jewish ritual law who headed the dig, contends that stone vessels were commonly used for ritual purity purposes.  Adler stated, “Stone vessels played an integral role in the daily religious lives of Jews during this period. Perhaps because stone wasn’t among the materials mentioned in the Levitic purity codes it was deemed an exception. It was a Jewish ‘Stone Age’ of sorts.”

What makes this discovery so interesting is the story of John 2.  Taking place at Cana (identified today as the site of Kafr Kanna, located in the Beit Netofa Valley just one mile north of the stone quarry cave of Einot Amatai) was a wedding involving six large stone jars of water. Each jar held 30 gallons of water. So who knows… maybe these jars were mass-produced at this stone quarry?  One can never be sure, but it’s an interesting idea because once again this archaeological find connects us with a story from the Bible.

Click HERE for the entire article about this amazing discovery.