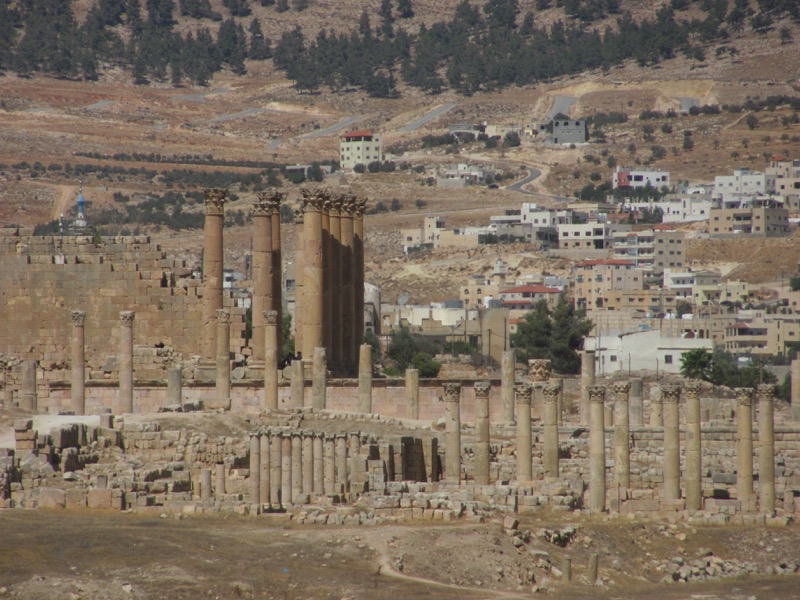 The Temple of Artemis, Jerash, Jordan

Today we left the Sea of Galilee area and drove south to the Jordan border. It would be another very nice sunny day, with mild temps. On the way to the border we made a brief stop to the Kinneret Cemetery located at the south end of the Sea of Galilee. This is where a famous “Rachel” is buried. She was an early Jewish pioneer to the land.

We then proceeded to the northern border crossing called the Sheik Border. After a delayed border crossing, we finally entered into Jordan where we met our guide, Sam. He is a Jordanian Christian. Boarding our bus after taking care of the last passport check, we began our drive through the northern Jordan country-side. After about an hour’s drive, we arrived at Jerash, the largest Roman city in the area. We spent about an hour and a half exploring this amazing ancient site. Among the things we saw included the Arch of Hadrian, the hippodrome, the Temples of Zeus and Artemis, the theater, and the Cardo.

Boarding back on the bus, we drove south by the Jabbok River (where Jacob wrestled with God, Genesis 32) and through Jordan’s capital, Amman. It is a city with such diversity, the very poor the refugee, and the affluent. In the mid-afternoon we arrived at Mt. Nebo. Visibility was fair, but at least we could see down to Jericho, the Dead Sea, and the hills of Gilead to the north. The Hill Country of Judah & Jerusalem were barely visible on the horizon. We read from Deuteronomy 31, 34, and Joshua 1. It was on Mt. Nebo where Moses died. Joshua would succeed him, leading the Israelites to cross the Jordan River and enter into the Promised Land.

Because of time, we could not see the 6th century AD Medeba Map. However, we did stop at a mosaic school where we saw how mosaics today are made. Here we saw a full-scale replica of the map. As a bonus, we also enjoyed watching the owner of the shop glue together the soles of Tim’s shoes that fell apart.

From here, we left Medeba and drove 3 hours to Petra, stopping once on the way for a rest-stop. We finally arrived at Wadi Musa, the town of Petra. We ate a late dinner before retiring for the evening.

We are all excited to see Petra tomorrow, one of the seven wonders of the world!!