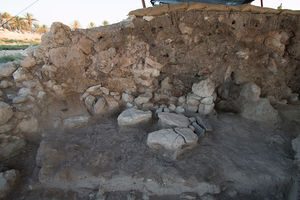 An excavated area at Tel Megiddo from 2014 shows a stone-paved floor that has fire-blackened sediment. The wall consists of collapsed red and yellowish mud bricks.
(Credit: Ruth Shahack-Gross)

Believe it or not and call me strange, but every time I go to archaeological sites in Israel I get excited when I see an ancient fortification wall from biblical days! To see a stone wall dating to either 2,700 years old (Hezekiah’s time) or 3,400 years old (Joshua’s time) or even a mud-brick gate that dates close to 4,000 years old (Abraham’s day) is both stimulating and “goose-bump” exciting! Or in other words, to stand in front of the wall at Jericho and think that this is a portion of the exact same wall that Joshua saw is both mind-blowing and staggering.  How these walls were built to last so long is an engineering feat!

The question of how the walls and gates of these ancient cities were destroyed is equally interesting. A recent study of the destruction level at Tel Megiddo reveals some very interesting things.

In relation to the Conquest of the land by Joshua, we are told in Book of Joshua that of the 31 cities conquered by Joshua (see Joshua 12), three cities were not only destroyed but also burnt. These cities were Jericho (of which there is a massive burn level about one meter thick in places), Ai (Joshua 7-8), and Hazor (which also has a burn level). Well, at Tel Megiddo the evidence of ash debris and mud-brick buildings dating to about 3,000 ago reveal that the city’s destruction would only have taken about three hours. This conclusion is based on experiments made with home-made mud bricks.

According to study researcher Ruth Shahack-Gross, an associate professor of geo-archaeology at the University of Haifa in Israel told Live Science, “the researchers made their own mud bricks, a process that was like playing with mud.”

She continued, “Rather than set the bricks on fire, the researchers put them in a hot oven and measured how long it took the bricks’ cores to reach 1,112 degrees Fahrenheit (600 degrees Celsius), a temperature reached by the ancient burned bricks at Tel Megiddo, according to previous analyses. In addition, the researchers tested bricks that had different sizes and shapes, as well as different amounts of chaff. As expected, larger bricks took longer to heat up than smaller bricks, but the amount of chaff didn’t significantly affect the time needed to heat the brick, the researchers found. Moreover, items within the dwellings — such as wood-support beams, furniture, matting, stored food and oil, and bedding — could have fueled the fire, helping it spread.”

Re-constructed walls of Jericho. Notice that the mud brick wall on the top was built on the sturdier stone retraining wall below (Illustration: Gene Fackler, Associates for Biblical Research)

The article states that “the study provides for the first time a quantitative tool by which archaeologists [can] estimate the duration of destructive conflagration events within ancient cities.”  The researchers wrote this in the October issue of the journal Antiquity.

Now this is quite an interesting conclusion given the fact that the upper portion of the double-walled city of Jericho, for instance, was made of mud-bricks. Although dating about 400 years prior to this one destruction level at Tel Megiddo being studied, according to Joshua 6, the Israelites circled the city seven times before the shofars (ram’s horns) were blown and the “walls came tumblin’ down…” After the collapse of the wall, the Israelites literally went into the city by climbing up and over the fallen mud bricks that fell outward. Then the city was set on fire. As the archaeological evidence suggests, not only were pots filled with grain set on fire (archaeologists in the 1930s and 1950s both found these), but so were house structures. It can be concluded that given the presence of an abundance of mud-bricks here at Jericho (used on top of the fortification walls and for select house structures), the city most likely fell within a three hour period as well. The fire must have been at an extreme temperature in order to produce a complete destruction of the city like the Bible records.

Incidentally, the use of mud-bricks can be seen at many sites in Israel, including prominent cites such as Ashkelon, Gezer, Shechem, and Dan.

To read the entire article on mud bricks, go HERE.