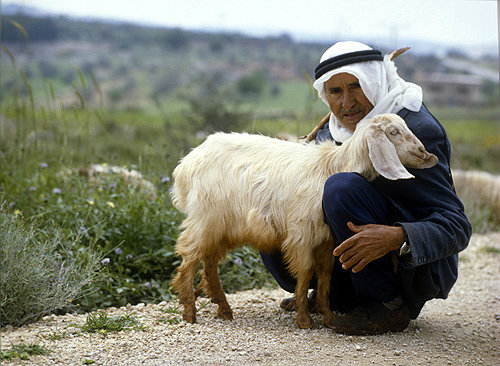 I love the imagery of the shepherd and his sheep. It is actually a very prominent scene in Israel, for shepherds and their flocks can be seen all the time on the hillsides of the Judean Desert and Hill Country of Judah & Samaria. We see this image many times on each Israel tour I lead.

The Bible speaks often of God as a shepherd. In the Hebrew Scriptures we read:

Isaiah 40:11 – “Like a shepherd He will tend His flock, In His arm He will gather the lambs And carry them in His bosom; He will gently lead the nursing ewes.”

Micah 5:4 – “And He will arise and shepherd His flock In the strength of the LORD, In the majesty of the name of the LORD His God And they will remain, Because at that time He will be great To the ends of the earth.” 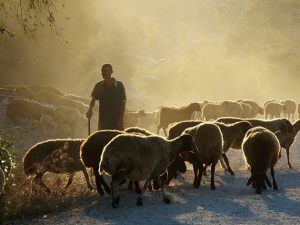 The problem is that we are all like sheep. I know I am. At times we are stubborn and don’t follow. Other times we don’t listen and we get lost. Yet Jesus as our Good Shepherd remains patient with us despite our short-comings and wanderings.

I appreciated how Pastor Charles Pope once described sheep. In a recent on-line devotion, He said:

He concludes (and rightly so, I may add) by saying, “In this matter real sheep are smarter than most of us. The goal for us is to be more wary, like sheep and to recognize only one voice, that of the Lord speaking though his Church, and to flee every other voice.”

This means following Jesus the Shepherd!

God, help me to trust where You lead, especially when I become wayward and witless.

God, help me to look to You, especially when I become weak.

God, help me to listen when you call, “Follow me!”