Mt. Moriah – The Mountain of God 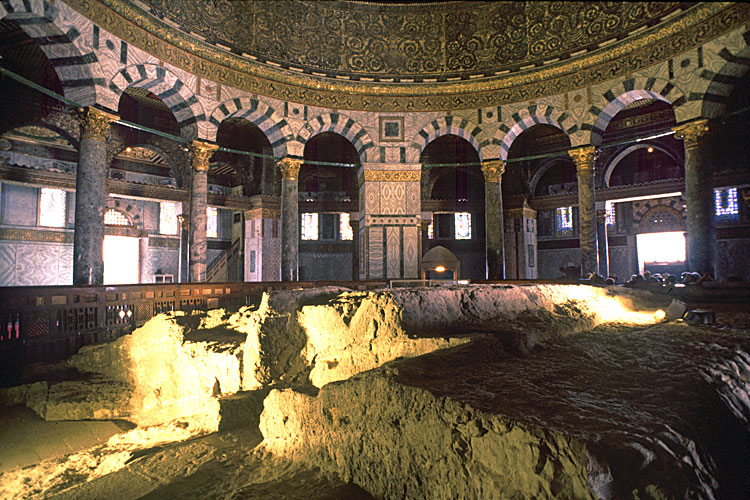 The “Foundation Stone” inside the Dome of the Rock on Mt. Moriah

Jerusalem is Israel’s eternal capital! It is a wonderful city filled with rich biblical history. The abundant archaeological ruins scattered all over the city gives testimony of continual inhabitance of the city from the days of the Old Testament through the days of the New Testament, and beyond.

The showcase of Jerusalem is the Temple Mount!  According to Genesis 22, it was where Abraham took Isaac (“Then God said, “Take your son, your only son, whom you love—Isaac—and go to the region of Moriah. Sacrifice him there as a burnt offering on a mountain I will show you.” Genesis 22:2). As the story goes, it was a lamb provided by God and not Isaac who was sacrificed on top of Moriah.  Later, according to 2 Chronicles, it was where Solomon built the First Temple (“Then Solomon began to build the temple of the Lord in Jerusalem on Mount Moriah, where the Lord had appeared to his father David. It was on the threshing floor of Araunah[ the Jebusite, the place provided by David.” 2 Chronicles 3:1). It was on Mt. Moriah where sacrifices were made within Solomon’s Temple.

Foundation Stone inside the Dome of the Rock (credit: Leen Ritmeyer)

Still centuries later with a building project that began in 20 BC, Moriah would also be the location for the Second Temple built by Herod the Great. This Temple was a building Jesus referred to in John 2 as “My Father’s house.” (John 2:16). Today, you can see the retaining walls built by Herod that supported the expansion of the Temple platform. In fact, the Western (or Wailing) Wall is one of those retaining walls. 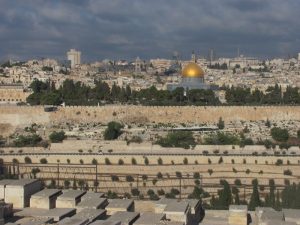 The view of the Old City of Jerusalem and the Temple Mount from the Mt. of Olives

After this Second Temple and all of Jerusalem was destroyed by the Romans in 70 AD, the Temple Mount essentially remained in ruins through the Byzantine Period (4th-6th century AD). But in the 7th century AD (in 691-92), the Dome of the Rock was built and completed on the very same area. Today the Dome’s roof has been gold-plated roof since 1959–1961 (and re-done in 1993). However, the original dome collapsed in 1016 and was rebuilt in 1021.

According to Muslim tradition, it was from here where Mohammad supposedly ascended into heaven on his “night flight.” Ironically, written inside the Dome of the Rock are all the reasons why the Dome was built (primarily geo-political reasons to mark the advancement of Islamic rule to this area). But what is not mentioned is this so-called flight to heaven by Mohammed. This “legend” (and that is all that it is!) won’t develop until 200 years later. So much for truth! 🙂

Regardless, the Dome was built directly over what Jews call the Foundation Stone (“even hashtiya” in Hebrew). This was the stone upon which the Ark of the Covenant was placed in the days of the First Temple. In the days of Herod’s Temple, there was no Ark in the Holy of Holies chamber. Most believe it was Josiah who hid the Ark prior to the invasion of Jerusalem by the Babylonians. Thus, according to archaeologist Leen Ritmeyer, “the High Priest put the incense in the receptacle (indentation) where the Ark once stood…” (see his comments HERE).  Incidentally, centuries following the Second Temple’s destruction, the Bordeaux Pilgrim in 333 reported that “there is a perforated stone to which the Jews come every year and anoint it, bewail themselves with groans, rend their garments, and so depart.”

So it was on Mt. Moriah, the mountain of God, that the two Temples once stood. Some contend within Judaism (e.g. our Jewish friends at the Temple Institute) as well as some within Christianity that a Third Temple will be built here as well. But this is a topic for another time I suppose. In the meanwhile given the political tension that exists between Jews and Muslims today, I am glad that God has all of this under control whether or not there will be a Temple built here again here on Mt. Moriah, the mountain of God!

Enjoy an excellent piece by our friends at SourceFlix about this holy hill!

The Mountain of the LORD from SourceFlix.com on Vimeo.