The Newly Exposed Tomb of Jesus! 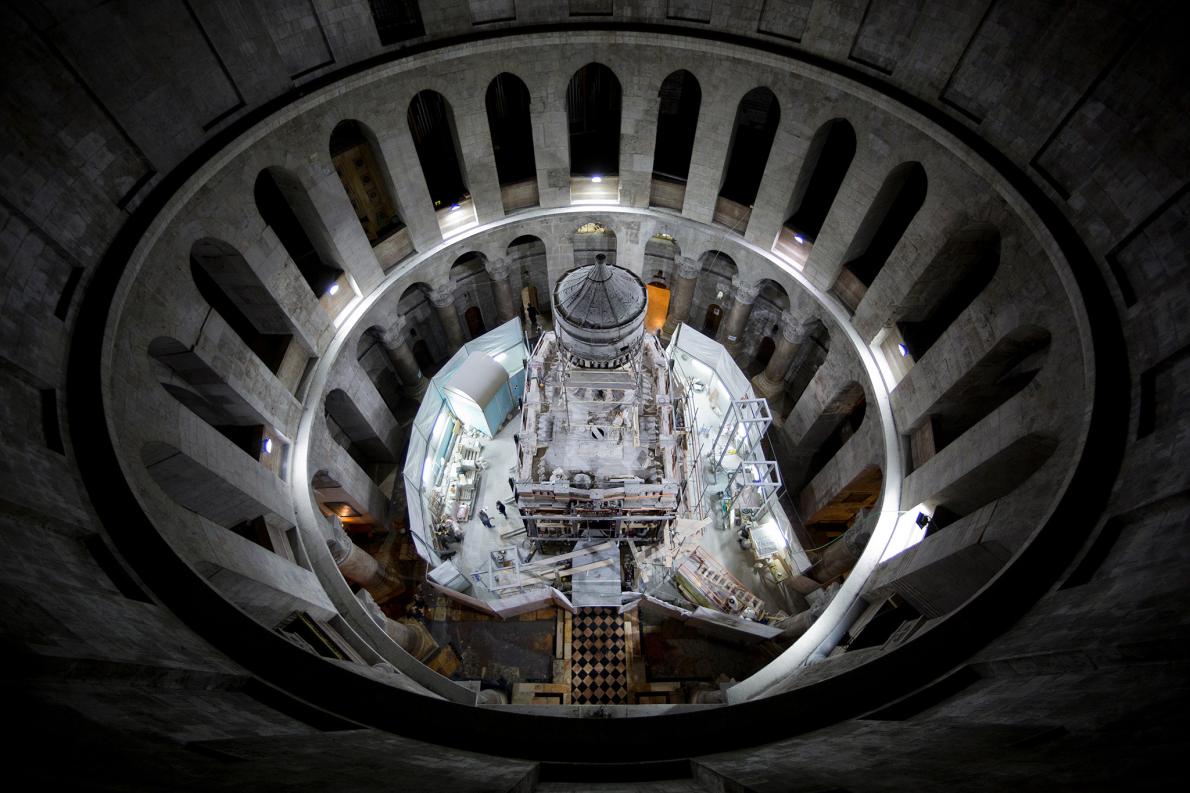 The traditional tomb of Jesus within the Church of the Holy Sepulcher, Jerusalem (photo credit: Obed Balilty, AP for the National Geographic)

The central belief of Christianity is the death and resurrection of Jesus as the Savior of the world!

In this blog, I simply want to report to you an exciting update on the renovation of the suggested tomb of Christ within the Church of the Holy Sepulcher. Located within the heart of the Christian Quarter of Jerusalem, this church was originally built in 325 AD. Given the archaeological “evidence” of numerous other “2nd Temple tombs” in and around/below the church (which tell us that this was a burial place and this was outside the city walls of Jerusalem at the time of Christ), this most likely was at least the area where Jesus was buried following His death and crucifixion.

I say “at least the area” of Jesus’ tomb. But I also personally lean on suggesting that there is a medium to high probability that this is the actual tomb of Christ, given the historical records following the 1st century AD. But please know that I am not one who “worships the place,” as I like to say, but I rather “worship the Person,” namely, Jesus! So know that I am not one who gets hung up on the place.

But with this aside, in a recent exclusive article by National Geographic called “Christ’s Burial Place Exposed for First Time in Centuries” (for the full National Geographic article, go HERE), the original stone slab suggested to be where Christ’s body was laid in the tomb following his crucifixion has been once again revealed. I find this fascinating, actually. For the first time in centuries, the actual stone tomb has been covered by marble since at least 1555 A.D. has been uncovered.

Removing the marble Edicule from the stone bench of the tomb (photo credit: Obed Balilty, AP for the National Geographic)

About the tomb itself, Fredrik Hiebert, archaeologists-in-residence at the National Geographic Society, said, “The marble covering of the tomb has been pulled back, and we were surprised by the amount of fill material beneath it. It will be a long scientific analysis, but we will finally be able to see the original rock surface on which, according to tradition, the body of Christ was laid.”

According to the article, “This burial shelf is now enclosed by a small structure known as the Edicule (from the Latin aedicule, or “little house”), which was last reconstructed in 1808-1810 after being destroyed in a fire. The exposure of the burial bed is giving researchers an unprecedented opportunity to study the original surface of what is considered the most sacred site in Christianity. An analysis of the original rock may enable them to better understand not only the original form of the tomb chamber, but also how it evolved as the focal point of veneration since it was first identified by Helena, mother of the Roman emperor Constantine, in A.D. 326.” It was this edicule that was damaged in an earthquake in 1927. 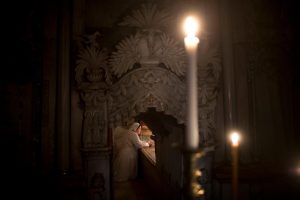 A nun kneeling at the traditional tomb of Christ (photo credit: Obed Balilty, AP for the National Geographic)

The Church of the Holy Sepulcher is currently under the supervision of six Christian sects. Three major groups – the Greek Orthodox Church, the Roman Catholic Church, and the Armenian Orthodox Church – maintain control of the church. Yet the three lesser-known groups – the Coptic, Ethiopian Orthodox, and Syriac communities – also have a presence there. Each group has their “designated” area over which they control. However, there are parts of the church that are considered “common areas” of worship for all of the groups. This includes the tomb area. However, because tensions can arise within these sects, a Muslim family, believe it or not for many centuries now, has the key to the church.