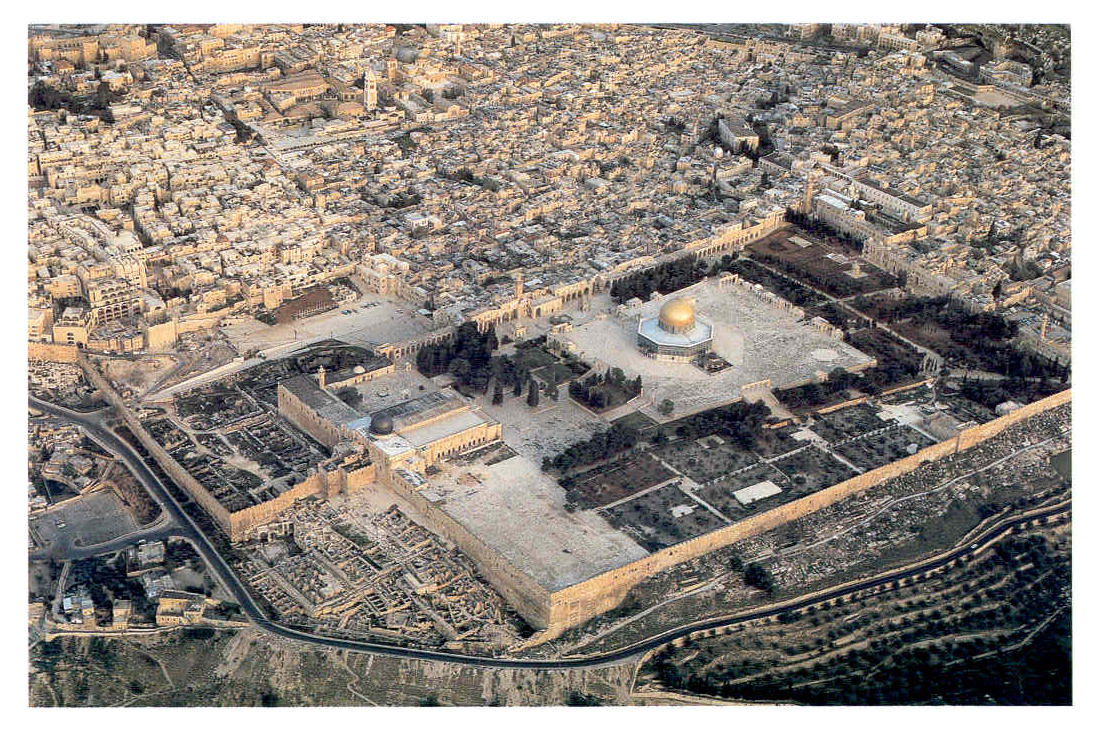 The Temple Mount of Jerusalem

From a biblical, historical, and even contemporary – political point of view, the Temple Mount is the focal point in all of Jerusalem! The Temple Mount represents the historical location of Mt. Moriah (Abraham & Isaac, Genesis 22, see also 2 Chr. 3) as well as the specific location for the 1st and 2nd Temples (built by Solomon and King Herod, respectively). But more specifically, the Temple Mount represents the very place where God made Himself known! It was where the Shekinah glory of God was experienced! It was where sacrifices were made to God. It was where the Ark of the Covenant resided for 100s of years during the days of the 1st Temple. It was where Jesus (and later the Apostles) spent so much time teaching about the malchut shamyim (“kingdom of heaven”) within the courts of the 2nd Temple.

Today the Muslim Dome of the Rock (completed in 691 AD) stands where the Jewish 1st and 2nd Temples once stood. It’s the “traditional” place where Mohammed supposedly ascended to heaven during his “night flight.’ By the way just as a matter of “fact,” Jerusalem is not even mentioned in the Koran once! And the “tradition” of Mohammed taking his “night flight” from Mecca to some mosque in Jerusalem (that incidentally didn’t even exist yet) didn’t develop until well after the Dome was built. Nevertheless, even though Herod’s Temple stood twice as high in the days of Jesus, the Dome is an impressive building. I’ve been in it a number of times in the 1980s. It has now been “off-limits” to non-Muslims since 2000.

The Temple Mount is so large that it can hold about 11 football fields side by side. This expanded platform is attributed to none other than King Herod the Great. It was in 20 BC that this Temple project began. The Temple would not be complete until long after Herod’s death in 4 BC. (see John 2:20… it took at 46 years to build, with Josephus mentioning that the final details of the Temple were not completed until decades later). The Temple was destroyed by the Romans in 70 AD.

To visit the Temple Mount today is actually a bit disappointing. This is primarily because of the political tension that exists between Palestinians and Israelis. For the Jew, the Temple Mount represents the most holy place in all of Judaism. For the Palestinian Muslims, while their “tradition” venerates the place as significant in Islamic history for the reason I stated above, it is a place where a political statement can be maintained. In fact, UNESCO regrettably just voted last month to no longer call it “Temple Mount” but rather “The Al Asca,” using the name of the mosque built about 15 years after the Dome of the Rock was built. Specifically, the Al Asca Mosque was built in 705 AD, although the present silver-dome structure dates to 1035 AD. The UN’s anti-Semitic intention is to divorce any Jewish connection to the Temple Mount. To be honest, this is quite sad and disturbing!

But indeed the Temple Mount is an important place in Jewish history. In fact, the folks at the Temple Institute in the Jewish Quarter of the Old City have planned and prepared all the elements for the building of the 3rd Temple on the Temple Mount. How this is all going to work with the presence of both the Dome of the Rock and the Al Asca Mosque on the Temple Mount currently is a topic for another blog.:) Sure makes for interesting political and theological dialogue though!

So enjoy this “flyover” produced by our friends at SourceFlix of the beautiful Temple Mount in the holy city of Jerusalem!