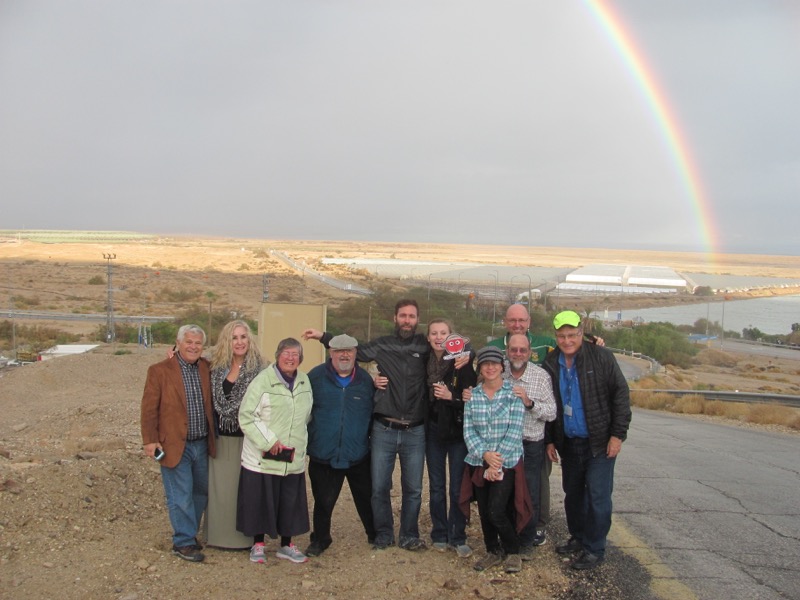 Floating in the Dead Sea

The morning started with a later check-out time. This allowed the group to enjoy floating on the Dead Sea before breakfast. Today would be a very unique weather day here in this area We had sun, rain, cool temps (50s) and a number of unbelievable full (and double) rainbows.

Prior to breakfast a few floated in the Dead Sea. After breakfast we left the hotel at 9:15 and drove north to Masada. As we drove, we read from Psalm 18:1-2 which refers to God as our metzada (“fortress”). At Masada, we road the cable car to the top. We saw many things, including the southern cistern, the palace, the Roman ramp, and the bathhouse. To the north appeared our first rainbow of the day. Five in the group walked down the Snake Path to the bottom (1.2 miles, descending 1,000 feet).

With the road now open (it was closed due to flash floods), we drove further north to Engedi. Walking up the canyon, we read from Song of Songs 1 (“henna blossoms from Engedi”), 2 Chronicles 20 (the “ascent of Ziz”), and 1 Samuel 24 (David hiding in a cave from Saul). Because of the fear of flash floods, we were only able to walk to the first water falls. Along the way, we saw 30-40 ibex and a few coneys (Psalm 104).

Rainbow over the Dead Sea

Located towards the northern end of the Dead Sea, Qumran was the next stop. On the way, we saw another rainbow. Over the lunch hour, six in the group hiked to Cave 1. It was here where the first scrolls were found in 1947 (including the famous Isaiah Scroll). At the site of Qumran, we saw the ruins that date back to 1st century BC to the 1st century AD. We read from “Psalm 151” (an extra psalm of David found here) as well as Psalm 19. We celebrated the preservation and sacredness of God’s Word. Upon leaving, a double rainbow appeared again over the Dead Sea.

On our drive to Jerusalem (ascending 4,000 feet), we enjoyed a brief stop overlooking the Wadi Qelt. We heard the words of Isaiah 40. Shlomo also sang Psalm 23.

A double rainbow at Qumran

Upon arriving to Jerusalem, we checked in and enjoyed dinner together. Following dinner we walked to the Western Wall, the most holy area for Jews today! It was amazing to see!

We are looking forward to the next three days here in Jerusalem!