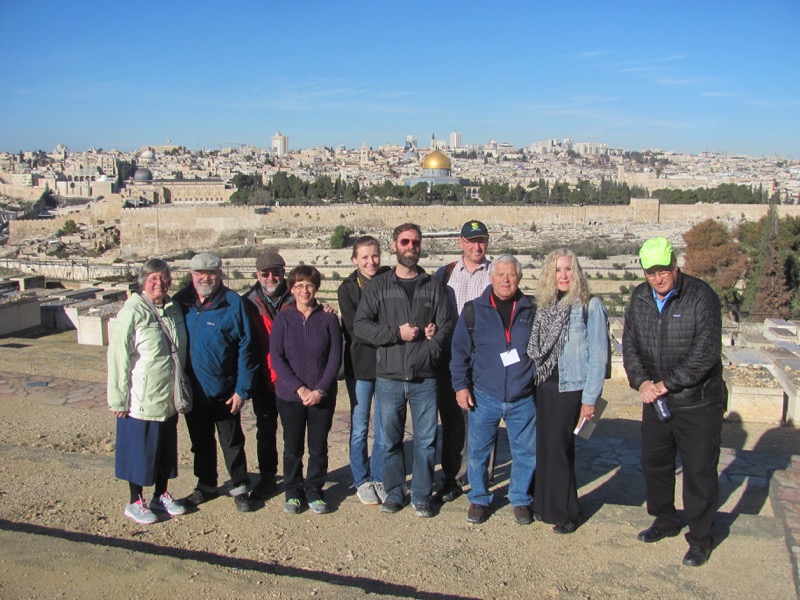 The January 2017 Pastor-Spouse group standing on the Mt. of Olives in Jerusalem

We awoke today to a wonderful sunny day. Although the air was cool (high 40s), it provided very clear visibilities. We left the hotel shortly after 7:30. Circling the Old City of Jerusalem (with walls dating to 1537 AD), we drove up the Mt. of Olives. Here we got our first panoramic view of the Old City and Temple Mount. Walking down the western slope of the Mt. of Olives we stopped at the Dominus Flavet chapel. Here we read from Luke 19 about the Palm Sunday event and Jesus weeping over Jerusalem. We also recalled His ascension (Luke 24, Acts 1) as well as His return on the Mt. of Olives (Zech. 14).

Continuing our walk further down the slope we stopped at a special place connection with the Garden of Gethsemane. We read from Luke 22 and enjoyed some quiet time of reflection. It was here where Jesus said, “Not my will but Yours be done.” It was also here where Jesus was betrayed by Judas.

The Eastern Gate in Jerusalem (closed since 810 AD)

From here we walked across the Kidron Valley to the St. Stephen’s Gate (also called Lions & Jericho Gate). We saw the Eastern Gate (Ezekiel 44) which has been closed shut since 810 AD. Entering the Old City, we enjoyed singing in a Crusader church called St. Anne’s Church. The acoustics produce an echo of about 8 seconds. On the same grounds is the Pool of Bethesda. We read John 5 about the lame man being healed here.

Walking through the Muslim and Christian Quarters, we arrived at the Church of the Holy Sepulcher. This is one of to suggested places for the crucifixion and burial site of Jesus. Inside we saw an example of a 2nd Temple tomb dating to the time of Christ.

Incredible view of the Dead Sea from Herodium

After lunch in the Christian Quarter, we walked out of the Jaffa Gate and drove southeast about 8 miles to Herodium. This was where King Herod was buried when he died in 4 BC. Climbing this palace-fortress, we enjoyed a spectacular view of the area. The clear skies enabled us to see Jerusalem to the north, Bethlehem to the east, and the Judean Desert & Dead Sea to the east. We descended down through the cistern system. Through glass, we also were able to see the Herodian frescos.

In Beit Sahour (an eastern suburb of Bethlehem), we enjoyed singing Christmas carols in a cave in the Shepherds’ Fields. We also sang in the Chapel of the Shepherds. We read from Luke 2 and Galatians 4:4 (“for just at the right time God sent His Son…”).

We ended the day in Bethlehem at an olive wood shop and store. This shop and store is owned by Palestinian Christians. We returned to our hotel for dinner and an optional walk to Ben Yehuda to get a taste of some Israeli modern life.