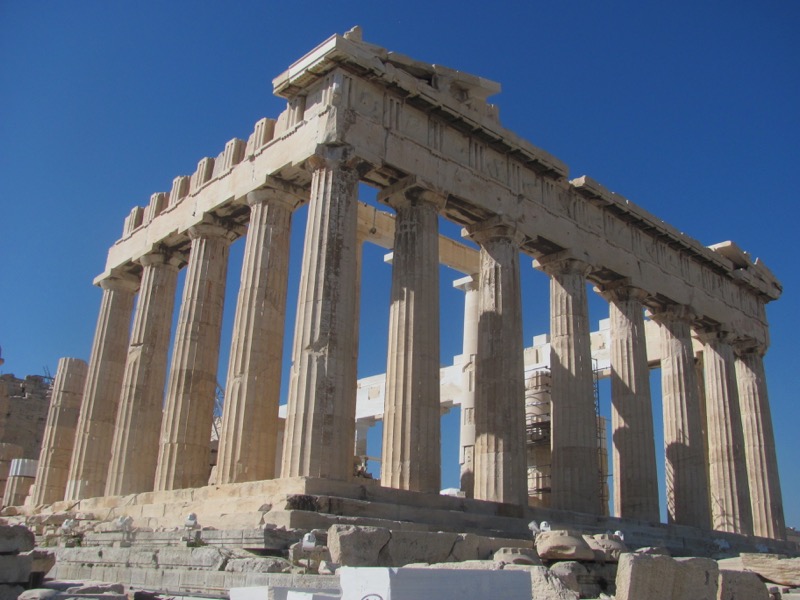 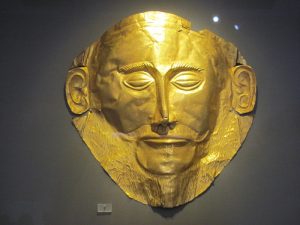 The golden mask of Agamemnon from Mycenae, Greece

Today was our last day here in Athens. Once again we had fantastic weather, with sun and temps around 65-70.

This morning was a morning of leisure. Some slept in and enjoyed a late breakfast while others got up and wondered out into the city on their own. Some went to the National Archaeological Museum while others walked to the Plaka once again for some shopping and another taste of good Greek culture. In the museum we saw the famous golden masks of Agamemnon from Mycenae (just south of Corinth) as well as many other artifacts (i.e. Poseidon) on display. It was quite impressive.

The Parthenon on the Acropolis of Athens, Greece

At noon we all met back at the hotel. Boarding Christos’ bus and greeting Aliki our guide, we drove to the world-renowned Acropolis (it was closed on Monday due to a strike). Climbing this ancient hill, we saw all the famous monuments still standing – the Propylea, the Erechtheum and of course the massive Parthenon/Temple of Athena. The building was officially called the Temple of Athena the Virgin (“Parthenon” comes from the Greek word parthenos, “virgin”). The building of the Parthenon began in 447 BC in order to replace an existing temple that was destroyed by the Persians in 480 BC. It was completed in 438 BC. Measured at the top step, the dimensions of the base of the Parthenon are about 210 x 90 feet. It has a total of 46 outer Doric pillars and 19 inner pillars, for a total of 65. In the middle of the Temple stood a 40 foot statue of Athena. Like most other temples, it was built on a “4 x 9” ratio. From the acropolis we also could look down to the agora in one direction, and to the Temple of Zeus and Hadrian’s Arch in the other.

The Erechtheum on the Acropolis, Athens-Greece

To end the day, we drove about an hour to Cape Sounion. The drive was beautiful as the road winds around the coastline of the Aegean Sea. Once we arrived we saw the impressive Temple of Poseidon, the god of the Sea and protector of sailors. The temple is located right on the edge of the coastline. There are 15 standing pillars of 38 pillars that once stood here. The temple took four years to build (444-440 BC). The Apostle Paul would have sailed past this temple en route to Athens (from Berea, Acts 16). Nearby we also enjoyed a time one last time of quite reflection, worship, and reflection. We read from Psalm 91, perhaps a psalm that offered great comfort and encouragement for Paul on all his journeys.

The Temple of Poseidon on Cape Sounion, Greece

We drove back to the hotel for dinner. On the way, we stopped briefly by the beach for a marvelous sunset. At the hotel we said goodbye to Aliki. She has been an excellent guide and we enjoyed her very much! Following dinner, most in the group retired early since we all have an early wake-up tomorrow for our flight either back home to the States or to Rome for the optional extension.