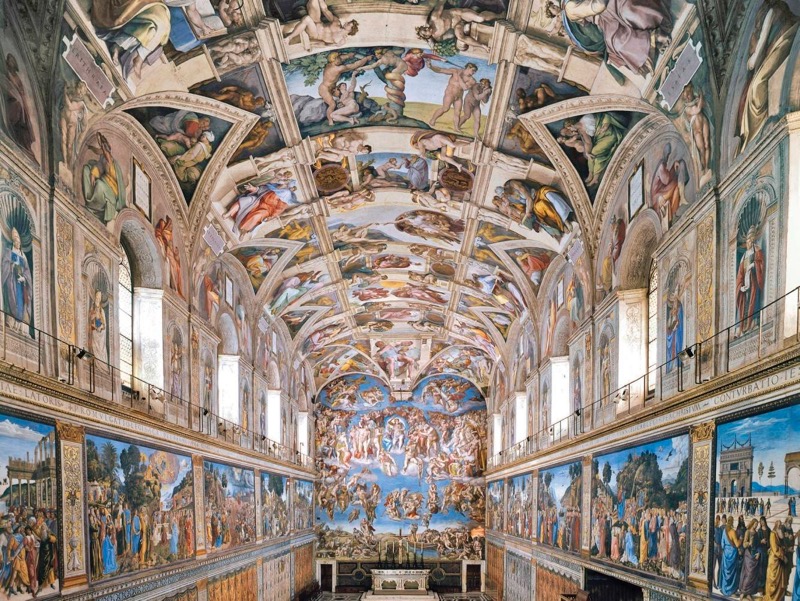 The Sistine Chapel in the Vatican, Rome

Today was our first semi-rainy day. We had sun and clouds in the morning, but then rain came towards the end of the day. Highs were in the low 60s.

We left the hotel at 8:20 today. We drove directly to the Vatican where we visited the museum and Sistine Chapel. About 850 people live in the “Vatican” today, the world’s smallest official “state.” Getting into the Vatican with special “VIP” status helped us avoid the hours-long lines. Upon entering, we got our first glimpse of St. Peter’s Church. When Michelangelo was 73, he started designing the dome of the church, the largest in the world.

The hallway of the Vatican Museum, Rome

Walking through the museum filled with ancient artifacts, tapestries, and maps was breath-taking. Even the ceiling of the hallway is amazing! Finally we arrived at the Sistine Chapel. The uncle of Pope Julius II built it in 1483 when Michelangelo was only five years old. So many of his teachers began painting the images in the chapel. The ceiling was left blue, with golden stars until Michelangelo began his masterwork. It took him four years of painting the ceiling, and another five yeas to complete the Last Judgment scene on the front wall of the chapel. The chapel is simply stunning!

Leaving the chapel we entered St. Peter’s Basilica. It is the largest in the world. The original church was built in 319 AD, but the present church was built in 1504. As we walked through the church, we saw the famous Pieta sculpture of Mary holding the crucified Jesus. We also saw the remains of a few popes who earned “sainthood” after their deaths. Leaving the church we entered Vatican Square. It is a large gathering place in front of the church itself. We enjoyed lunch in this area as well as some free time.

Driving to the other side of the city, we visited the Colosseum next. This was a massive amphitheater built between 72-80 AD. It could hold up to 70,000 people back in the 1st century. It had four floors (although a fifth floor was added 10 years later. Gladiators fought here, although there were also fights with animals and even “ship battles” when the Colosseum would be flooded with water.

Nearby we visited the Roman Forum. With the rain starting now, on the way we saw the Arch of Constantinople and the Arch of Titus. Sculpted in the inside of this arch is the Jewish Menorah, commemorating the fall of Jerusalem in 70 AD. In the Forum we saw various ancient structures associated with the early Romans (e.g. Julius Caesar).

Titus’ Arch in the Roman Forum. The Jewish Menorah is seen.

On the way to meeting our van, we walked past many other famous buildings from the past and the present. We drove back to the hotel for a few hours of free time. We then enjoyed dinner together with a great view of the dome of St. Peter’s Church in the near distance.