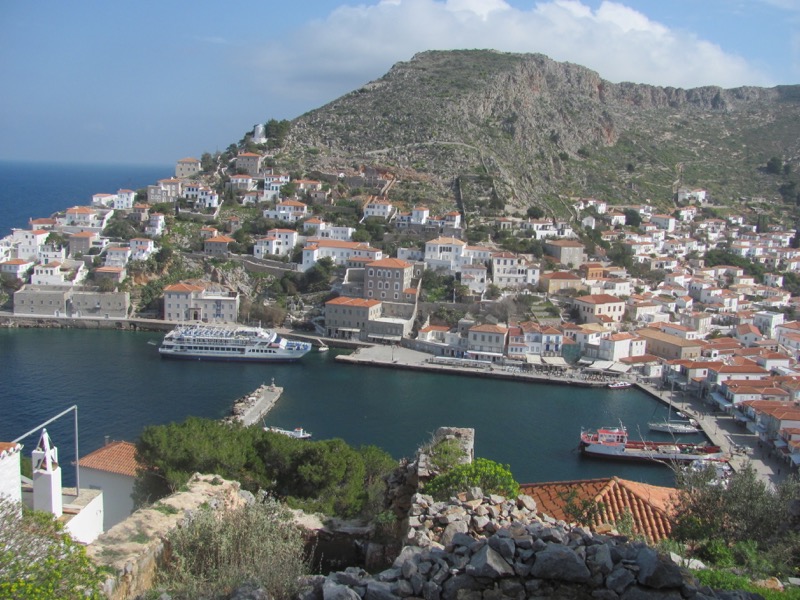 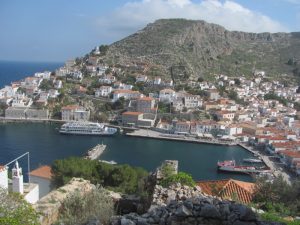 Hydra Island, Greece. 4,000 people live on this island. No cars or motorbikes are permitted.

Today was another spectacular weather day here in Greece, making our visit to three Greek islands absolutely perfect! The high temp was in the mid 60s. It as a wonderful relaxing day out on the Aegean Sea!

Following an early breakfast, we drove to one of the ports of Athens for a day-long ferry ride. Sailing on the Aegean Sea about two hours, we arrived at the first island, Hydra. This island in particular provided a picturesque port. We had about an 75 minutes to explore the island. About 4,000 live on Hydra. After boarding back on the ship, we enjoyed lunch provided to us by the ferry.

The second island was Poros. After docking, most in the group hiked up to the city tower. This island is used by the Greek Navy in training their young sailers.

The third island, Aegina, was a largest of the three we visited. Known for the growing of pistachios here, many bought goodies. A few in the group explored the Temple of Apollo that once stood here in the 5th century BC. It was quite impressive. An early city was established here back in the Middle Bronze Periods (e.g. 2,000 BC). This island also had many of the shops open for coffee and shopping.

The group on Aegina Island, Greece

The sunset on the way back to Athens was very nice. We also enjoyed some “Greek dancing” (especially Sue!) before we arrived back at port. Christos picked us up here. We drove back to the hotel for a late dinner.

The beauty of these Greek islands was simply breathtaking!