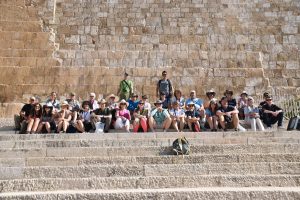 Steps on the southern end of the Temple in Jerusalem

Today was our last day here in Israel, and it was a good one. It was also the last day of Ramadan which made the Old City a bit crowded in places. The weather was perfect once again full sun, with highs around 80.

We started the day at the Southern Wall Excavations of the 2nd Temple. We saw many things Jesus would have seen and used, including the Roman street, the pinnacle of the Temple (where He was tempted), and the massive stones. On the southern steps of the Temple we recalled the stories from the Gospels of people who used these steps to enter the Temple (Mark 12, 13; Luke 2, 18; John 10; Acts 3, & 5). It was probably in this area of the Temple that the story involving Peter and Pentecost took place as well (Acts 2). 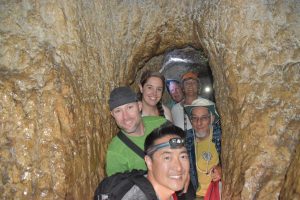 The “meeting point” in Hezekiah’s Tunnel

From here we walked south a short distance to the City of David. We first enjoyed a 15 minutes video about some of stories form the Old Testament that took place here. This included the capturing of Jesus by David (2 Samuel 5), the Assyrian siege of the city during the days of Hezekiah (2 Kings 19-20, 2 Chronicles 32, Isaiah 36-37), and the Babylonian destruction of the city in 586 BC (2 Chronicles 36). 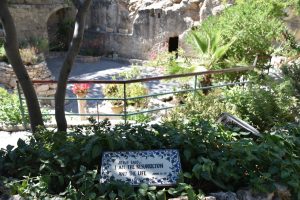 The Garden Tomb in Jerusalem

Walking through the excavations here (including “Warren’s Shaft”), we came to the water source of the city, the Gihon Spring. This is where Hezekiah’s Tunnel begins. Many in the group walked in water through this 1,720 foot tunnel while others took the “dry” Canaanite tunnel. Both groups converged at the Pool of Siloam where we read John 9 in dramatic fashion. From here, some even walked up the Herodian drainage channel back to the SW corner of the Temple.

After a few hours for lunch, shopping, and exploring the city, we walked through the Muslim Quarter and out the Damascus Gate to the Garden Tomb. This site is an alternative site for the crucifixion and burial location of Jesus. Here we enjoyed a time of worship and Communion. It was a great way to end the tour. 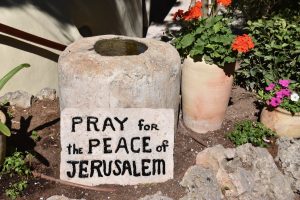 From here we drove towards the airport for our night-flight home. We stopped on the way for our farewell dinner. The time was special allowing us to recall all the life-changing experiences we had over the last 11 days here in Israel.