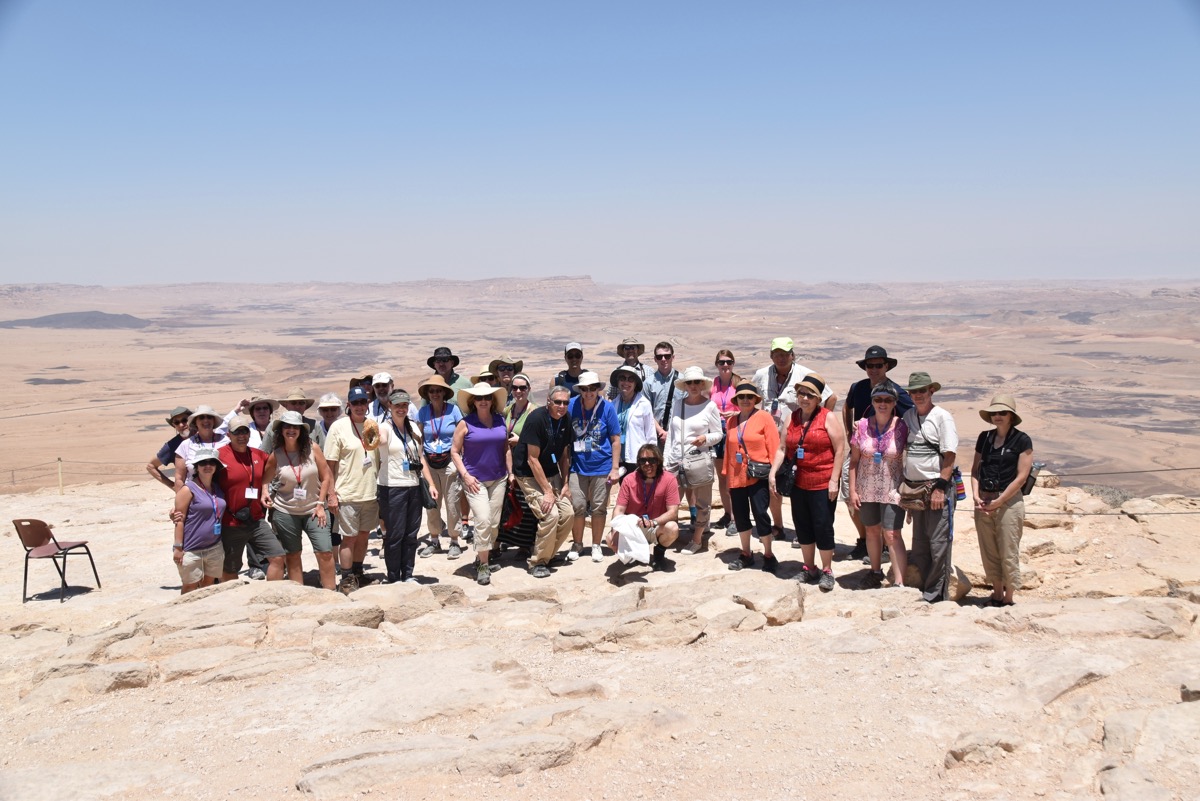 The well of Beersheba

Today was spent in the region of the Negev. The day was predictably sunny once again, with highs around 95. Following breakfast, we once again checked out of the hotel. Tel Beersheba was our fist stop, only 5 minutes from the hotel.

Beersheba was a city visited by the likes of Abraham, Isaac, Jacob, Elijah, and others. We read from Genesis 21 about how Abraham made a treaty here and dug a well. Sitting by the well we also remembered the words of Psalm 23 about how the shepherd’s “cup” (trough) overflows with water. At the sites we saw the Solomonic gate (10th century BC) and many “4-room Israelite houses” before leaving the site through the amazing cistern system. We also saw a replica of the 4-horned altar found here.

Driving south we visited Sde Boker where David and Paula Ben Gurion are buried. David Ben Gurion was Israel’s first Prime Minister in 1948. Their graves rest along the edge of the Desert of Zin. It was here where the spies came exploring (Numbers 13). It was also in this area where Moses struck the rock for water (Numbers 20). Driving down into the Zin, we hiked through the canyon. Some in the group ascended all the way to the far rim of the canyon.

Camel Rides in the Judea Desert

We returned to the NE corner of the Negev and to the ancient site of Arad. Here we saw the Early Canaanite city below (where the King of Arad lived, Numbers 21) and the Israelite city built on the citadel. We read also from 2 Chronicles 34 about the religious reforms of Josiah. He (and Hezekiah before him) brought an end to the false worship practices of the Judeans. In the temple constructed here, we remembered the words of Paul (Romans 12:1) to be a living sacrifice to God. We also had the joy and delight to meet Chinese Christians here. We enjoyed singing a few songs with them and sharing precious fellowship with them!

Sunset in the Judea Desert

After picking up snacks in a grocery store in modern Arad, we drove to Hanokdim, our “Bedouin” camp/hotel for the night. Located in the Judea Desert, we first enjoyed camel rides before listening to a Bedouin share a bit about his culture. After dinner, we enjoyed a time of praise and devotion around a camp fire. It was another great day!