Baseball in Israel at Kibbutz Gezer! 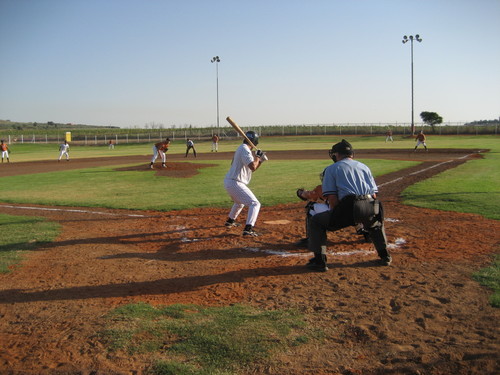 The ancient city of Gezer has been the attention of the archaeological world these last few weeks since the discovery of apparently three Canaanite bodies among the ruins. Here is a recent blog about it (go HERE).

Baseball field at Kibbutz Gezer, one of three major fields in Israel. This was the first field in Israel, built in 1979.

However, modern Gezer has also been “in the news” recently as well. But not for the discovery of bodies, walls, and other ruins from the ancient past, but rather for (wait for it…..). baseball! Yes fans, you heard it correctly.

A number of years ago, an intentional effort was made to introduce Israel to the game of baseball. The kibbutz at Gezer was the first to build a baseball field in 1979. Since then, as crazy as it seems, lots of money and planning went into trying to attract modern Israelis to this great American pastime. For the most part, these efforts have failed, for the league that was established essentially fell through. There are approximately 2,000 in Israel who officially play baseball.

However, baseball is still played in limited parts of Israel today. The game is played primarily by a younger generation of Israelis who have immigrated from the States. Personally being an umpire, back here in the States I have actually officiated at International tournaments where every other year there is a team from Israel playing! This means Israel is sending baseball teams. In fact, Israel’s baseball team did surprisingly well in the recent World Tournament.

Below is drone video coverage of a game of baseball being played at Kibbutz Gezer. Located in the Shephelah of Israel (the “lowlands of Judah”), the Gezer field actually looks phenomenal!

I have my doubts, but I personally hope that baseball catches on in Israel. In the meantime, play ball!