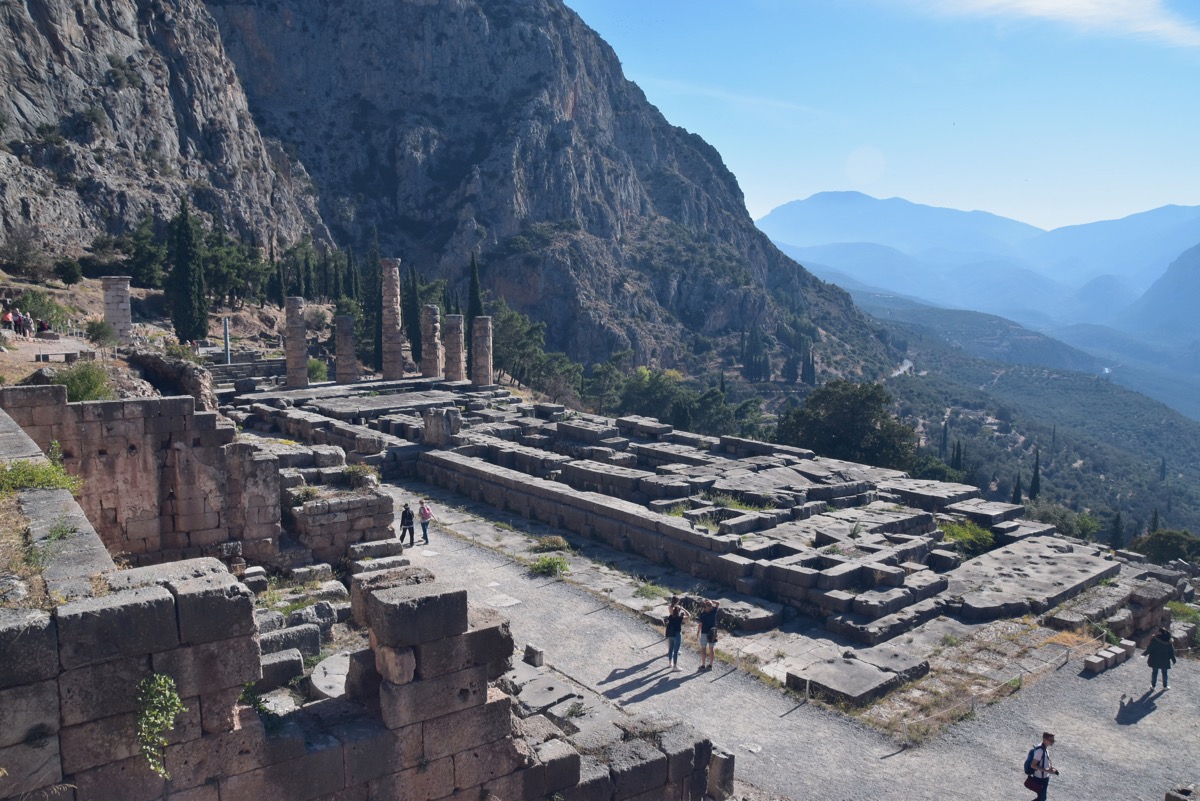 Today was our last full day here in Greece. For the last time, we are thankful for the bright sun and temps in the mid-high 70s again.

The mountainous region of Delphi, Greece

We started the day early today, at 7 a.m. This is because we had a longer drive to one of the best -preserved classical archaeological sites in all of Greece – Delphi! As we left the hotel, we read from I Corinthians 9 (running towards the “prize”) and 2 Corinthians 10 (spiritual weapons), being reminded once again of the life and culture of Paul and the need to approach ministry armed with the power of God’s Spirit.

The Temple of Apollo – Delphi, Greece

Driving to Delphi was very scenic. After leaving the Athens area, we entered into a more mountainous region of mainland Greece. We stopped once along the way for a snack and bathroom break (wow… great glaze donuts!!). The mountain range of Delphi is called Parnassos. It is a beautiful region of mainland Greece. Delphi was the site of the Delphic oracle, the most important oracle in the classical Greek world. According to mythology, the divine oracle of Apollo was given nine times each year (on the 7th day of the spring summer, and fall months). It was also here beginning in 586 B.C. that athletes from all over the Greek world competed in the Pythian Games, one of the precursors to the modern Olympics.

Upon arriving in Delphi, the first thing we visited was the archaeological site. Here we saw many ruins waiting form the classical Greek Period (6th-5th centuries BC) to the Roman Period and time of Paul. Among the ruins we saw were the Treasury of Athena, the famous Temple of Apollo, the theater, and the stadium. It is one of the best preserved stadiums in all of Greece!

The well-preserved stadium at Delphi, Greece

Next, we visited the Delphi museum only a few minutes walk form the site. Here we saw some very impressive artifacts, including the inscription that mentions Gallio, Proconsul of Corinth. This helps verify that Paul was in Corinth around 51-52 AD. We also saw many statutes and temple reliefs.

After eating lunch at a traditional Greek restaurant in Arachova (a beautiful small town nearby built on the slopes of the mountain), we made our way back to Athens. We stopped at the Athens Airport first. Here we said goodbye to the six in the group who are extending their trip to Rome. There will be lots to see there! Rome was Paul’s final destination (Acts 27).

Inscription of “Gallio the proconsul.” He is mentioned in Acts 18:12)

For the rest of us, we drove back to our hotel for dinner and a free evening. Some in the group enjoyed walking around the streets of Athens on their own.

It was a great trip of walking in the footsteps of Paul and “connecting the dots” between the world and culture of the New Testament and the Scriptures!

We plan to transfer in the morning to Athens Airport for our return flight back to the States. We arrive home in the late afternoon/evening.