The Geography of the Christmas Story 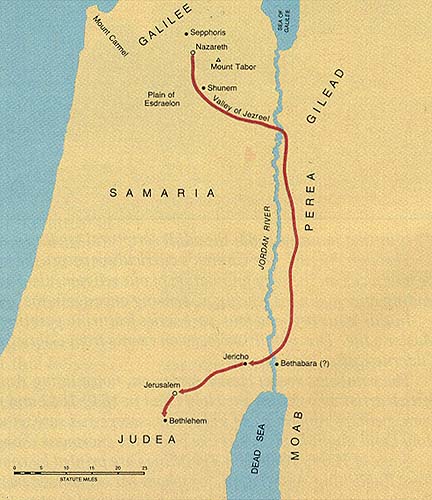 Route from Nazareth to Bethlehem

The Bible is filled with stories. They are narratives that don’t take place in a vacuum. For each story of the Bible, there is a cultural context in which it takes place. Many Bible commentators consider the cultural contexts of these stories in order to extract an accurate meaning. There is also an historical-political context to each story. This means paying attention to what took place historically in the region surrounding the events of the story.

Additionally, there is also a geographical context to each story. Understanding the geographical surroundings of the story helps the student of the Bible connect the dots between the regions or cities that are part of the narrative. “Connecting the dots” between regions and cities is an integral part of every Israel tour we lead. The Christmas story is one of those narratives where understanding the geographical context sheds light on the amazement of God’s redemptive story.

The city of Nazareth today

According to the Gospel text, Mary and Joseph were from Nazareth. It is located in the Lower Galilee region (today Nazareth is a city of about 80,000 consisting of primarily Arabs who are citizens of Israel). The town of Nazareth was a small city, so insignificant that it is not even mentioned in the Jewish Talmud. The village consisted of perhaps as few as a dozen families. Located just 4-5 miles away was Sepporis, the primary city in the region.  So in this geographical region of Lower Galilee, Nazareth was insignificant in light of Sepporis.  Yet this was where the angel Gabriel appeared to Mary (and later an angel spoke to Joseph in a dream (Matthew 1:18f). Isn’t that just like God, to call, use, and inspire common people from common places for His redemptive purpose!

When the Time Came

When the time came, Mary and Joseph traveled to Bethlehem. The direct distance between Nazareth and Bethlehem is about 60 miles. However, most Jews traveling from the Galilee in the north to Jerusalem and Bethlehem to the south took the Jordan River Valley route.  Intentionally avoiding the region of Samaria, this would have made the trip about 15 miles longer, for a total of about 75 miles.  This route would have taken the young couple through the eastern branch of the Jezreel Valley and past Bethshean before turing south in the Jordan River Valley. This means the journey to Bethlehem would have taken them a good 5-6 days. In regard to Mary’s condition, how about covering this distance while very pregnant? That’s quite impressive actually! Tradition places Mary riding on a donkey led by Joseph walking on foot. However, there is no reason not to believe that she would have walked most of this herself even in her pregnant condition. It was a difficult trip either way!

The Ascent of Adummim. This is the route taken by Jospeh and Mary from Jericho to Jerusalem & Bethlehem (credit: Bible Places)

The route would have continued from Jericho, located just north of the Dead Sea, to Jerusalem. This was the ancient “Jericho Road” that ascended about 4,000 feet in elevation up the Ascent of Adummim (the most difficult section of the route) through the Judean Desert to Judea’s capital city in the Judean Hill Country. Bethlehem, Mary and Joseph’s final destination, is located about 5 miles south of Jerusalem. While Bethlehem was probably not as small as Nazareth, it, too, was overshadowed by the awe and glory of Jerusalem. Additionally, located just about 4 miles east of Bethlehem was Herodium, one of Herod the Great’s “palace-fortresses.”  While we can’t specifically place this wicked king residing at Herodium at the precise time of the birth of Christ (he was most likely in his palace in Jerusalem though just 5 miles north), this towering fortress represented something “grand and mighty” in comparison to the humble birth of Jesus.

Now enter the “wise men or Magi. Whoever they were, they traveled from the east quite a distance, crossing the desert region. They must have traveled for months before finally first arriving in Jerusalem and staying there for some time before eventually finding the “house” of Joseph and Mary (Matthew 2:11). The geographical distance these Mede / Persian astronomers would have been at least hundreds of miles, up to 500 miles, depending on where they were from.

Real Places with a Real Reason

What does knowing a little about the geography of Christmas do for us?  It helps put into context the remarkable ways that God prepared the scene for the coming of His Son. It places the narrative of Christmas in various and unique geographical regions. Some of these regions are hilly (Lower Galilee), flat (Jezreel Valley, Jordan River Valley), and mountainous (Judean Desert, Hill Country of Judah). Most of all, it places the birth narrative of Jesus in real places with a real reason!

Jesus came “just at the right time” (Gal. 4:4) to provide an answer to sin and its consequences. He came to bring light. He came to be the Light in a dark world!