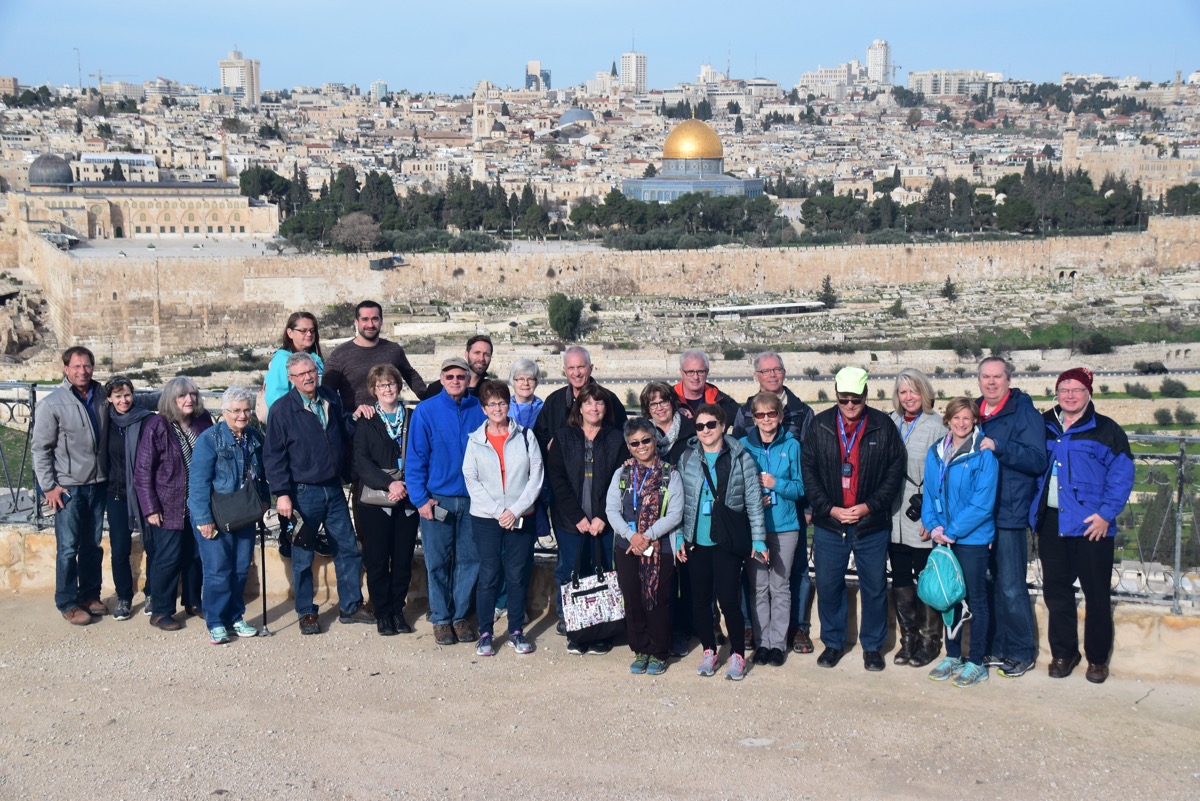 Today was our first day in Jerusalem. We were greeted with sun and cooler temps. But we would later enjoy a perfect day with highs in the low 60s.

Standing on the Mt. of Olives in Jerusalem

From the top we walked down the steep pathway down the western slope of the Mt. of Olives. We made a brief stop at the Dominus Flavet chapel. Here were read from Luke 19 about Jesus’ Palm Sunday entrance into Jerusalem as well as how we wept over this city. Seeing the Eastern/Mercy Gate, we also read from Ezekiel 44 about how one day this gate will be opened. We also recalled the words from Zechariah 14 about the Mt. of Olives splitting into two when Christ returns, with water flowing to the Dead Sea.

A little further down the slope of the Mt. of Olives is the Garden of Gethsamane. From a private garden arranged by a Franciscan Brother Diego read from Luke 22 about Jesus’ prayer – “not my will but yours be done” – and later betrayal here by Judas. We took some time for reflection and journaling. It was a special time!

The “edicule” of the Holy Sepulcher church. This covers the traditional tomb of Christ.

Walking into the Old City through the St. Stephen’s Gate (also called Lion’s & Jericho Gate), we stopped at the Pool of Bethesda and St. Anne’s Church. We read from John 5 about the healing of the paralytic here. We also enjoyed singing in this Crusader church. We sounded heavenly with the 8 second echo. Walking the Via Dolorosa (the way of the cross), we entered the Church of the Holy Sepulcher. This is one of two locations for the death and burial/resurrection of Jesus. We ate lunch in the Christian Quarter (pizza!)

The 1:50 scale model of Jerusalem

Walking out of the Jaffa Gate, we drove to the Israel Museum. Here we saw three things: 1). 1:50 scale model of Jerusalem as it looked like in 70 AD prior to its destruction. It was helpful to “connect the dots” between the ministry of Jesus and the different locations around the city where Jesus served. 2). The Shrine of the Book. Here we saw a few samples of the Dead Sea Scrolls found at Qumran. 3). The highlights in the archaeological wing of the museum. We saw many special artifacts connecting us to the Bible (e.g. the Dan & Pilate Inscriptions, Herod’s coffin, ossuaries, the Moses’ Seat, etc…) 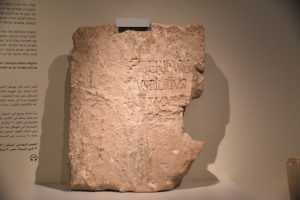 Our last two stops of the day were south of Jerusalem. First, we walked into a cave at the Shepherds’ Fields. Located actually in Beit Sahour, we enjoyed a time of considering the role of the shepherds in the birth narrative of Jesus. We read from Luke 2 and considered that it was “just at the right time that God sent His Son (Gal. 4:4).” We also sang a few carols both in the cave as well as in the Shepherds’ Chapel. We ended the day by stopping briefly at an olive wood store in Bethlehem.

Driving back to the hotel, we enjoyed dinner together, followed by an optional walk to Ben Yehuda street for some coffee shops and shopping.