Welcome to Israel sign within the Ben Gurion Airport

Our trip began today! Our group of 25 flew drove from MN to Winnepeg where we caught a flight to Toronto. While the international flight was delayed a little because of snow, we were able to take off despite deteriorating winter conditions. Once on board, we we served dinner and breakfast.

We landed at the Ben Gurion Airport in Tel Aviv around 11 a.m. where we proceeded through Passport Control. After securing our luggage, we met our guide (Shlomo) and driver (David). We loaded the bus and left the airport to spend a half a day in the Shephelah (Lowlands) of Judah. The weather was mild, with afternoon highs in the mid 70s.

The group at the “standing stones” of Gezer.

Our first stop was Tel Gezer. Located along get Aijalon Valley, this was an ancient Canaanite and Israelite city located strategically on the Coastal Plains. The city was conquered by Joshua (Josh 12) but not fully controlled until the days of Solomon (1 Kings 9). We also read from the Gezer Calendar (10th century BC agricultural seasons) and Ecclesiastes 3 about the seasons of life. Several times the Egyptians conquered this city from the Canaanites as well. At the site we saw the Middle Bronze tower, wall, gate and water system as well as the Iron Age (or Israelite) ruins including a 6 chamber stone gate built by Solomon. We also saw the standing stones of Gezer, probably used by Canaanite).

Driving south to the Sorek Valley, we stopped briefly at Beth Shemesh. Close by (on the other side of the valley) is Zoar and Eshtoal, the home area of Samson (Judges 13-14). He was attracted to Delilah, just a few miles west down the Sorek Valley. We also remembered the story from I Samuel 6 about the return of the Ark of the Covenant here from the Philistines. 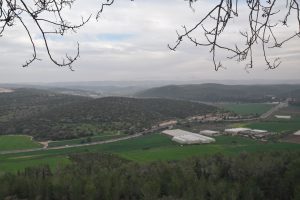 Our last stop of the day was to Azekah. Located along the Elah Valley, this ancient city is mentioned a few places in the Bible. With a great view of this valley below, we read from 1 Samuel 17. It was in the narrow end of the valley where the battle between David and Goliath took place. Looking west from the top of the site we could see Gath (Tel es Safi), the home of Goliath.

From here we hopped on Israel’s toll road straight to Netanya. We checked into our hotel and enjoyed dinner together. Over half in the group then enjoyed a great walk to the beach of the Medeterraian Sea.

We are feeling very blessed to be here in the land of the Bible!