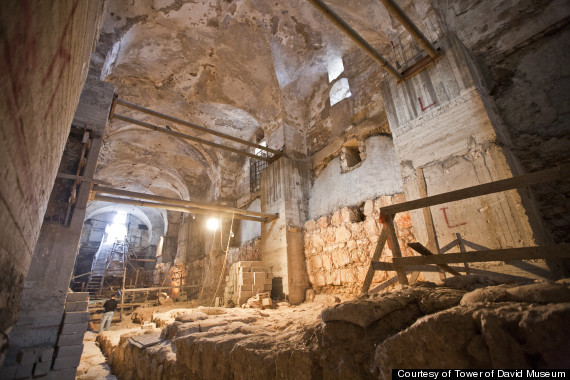 The passion of Jesus during His last week in Jerusalem can be seen in each of the four Gospels. He would die on a Friday. While He predicted for the first time His death and resurrection up north in a place called Caesarea Philippi (see Matthew 16), Jesus was only one day away from fulfilling the first part of this prediction, namely, His crucifixion.

A model at the Israel Museum of Herod’s Palace

Traditionally, the place of the trial and the sentencing Jesus by Pontius Pilate was the Antonia Fortress. This tradition is based on the discovery of a stone pavement (in Greek, lithostrotos, see John 19) that can be seen today below the Sisters of Zion convent. However, this pavement dates to the 2nd century AD, or to the time of Hadrian. This traditional location for the trial of Jesus happening here is what has led to the Via Dolorosa starting here and ending at the Church of the Holy Sepulcher (the place for the death and burial of Jesus according to a 4th century AD tradition).

At the opposite end of the Old City today, however, is Herod’s Palace. It was built by Herod the Great. Today, this palace can be seen in the area just south of the Jaffa Gate in an archaeological park called David’s Citadel. Here in recent excavations, a 1st century stone pavement has been uncovered. This is the most likely place where Jesus stood in front of Pilate (who was in town from Caesarea during Passover). Following sentencing, it was from here where Jesus bore His cross and carried it to Calvary.

Herodian ruins in the palace area known as the Kishle (credit: Ferrell Jenkins)

The video below offers a quick peak into the lower reaches of Herod’s palace. Over the last few years, the archaeological excavations have been quite thorough and revealing.

Jesus paid it all,
All to Him I owe;
Sin had left a crimson stain,
He washed it white as snow.