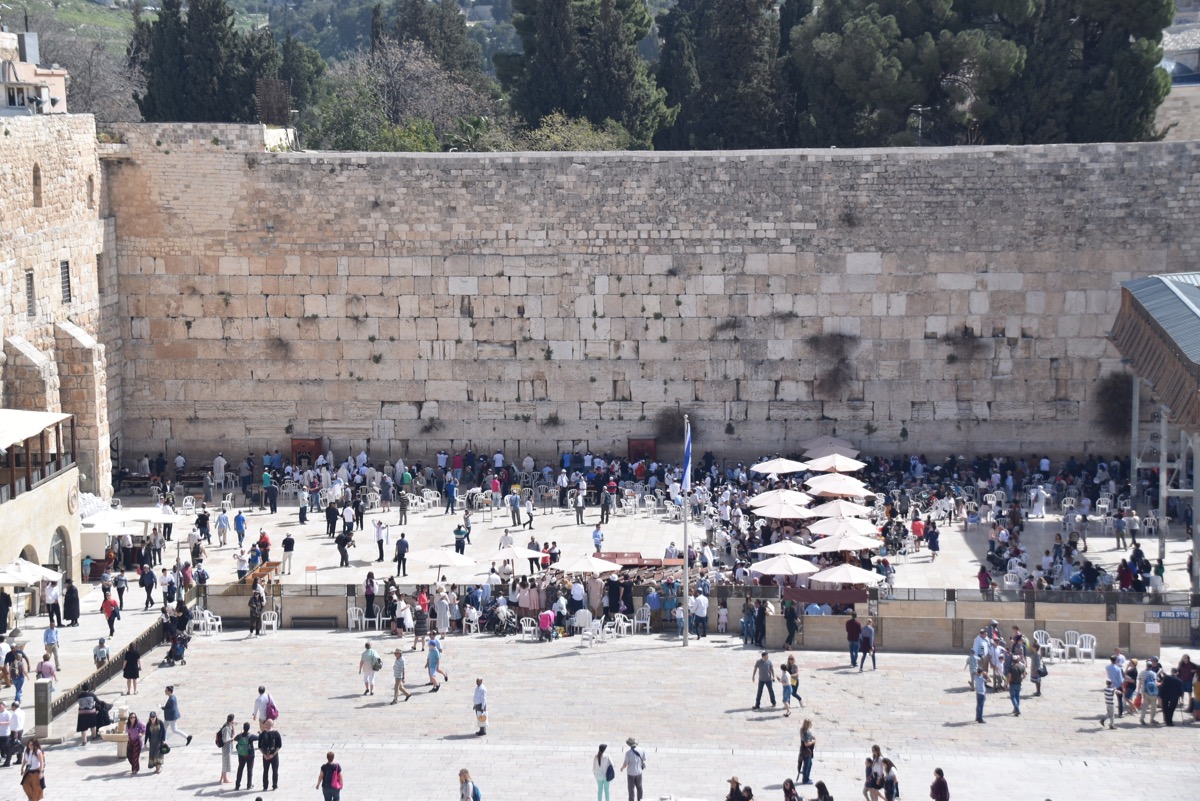 Today began in the Old City and ended in western Jerusalem. The sun was bright and sunny again, with temps around 80.

The Western Wall in the Old City of Jerusalem

Following breakfast, we left again around 7:30 this morning. We read John 2 (Temple…. 46 years to build, etc…) on the way to the Western Wall. Entering the Dung Gate into this area called the Kotel, this wall served as a retaining wall for the expanded platform of the Temple Mount built by Herod the Great beginning in 20 BC. After spending some time at the Wall, we walked about 400 yards north along this retaining wall. Here we saw massive stones, including the “Master Course” stone that weighs 100s of tons! Pastor John even was able to get a picture of the new small theater discovered recently among the ruins.

The 1:50 scale model of Jerusalem at the Israel Museum

We returned to the Jewish Quarter. Here, we enjoyed a visit to Shorashim (“roots”) where we heard Moshe (an Orthodox Jew) share about his Jewish faith in the context of our Christian faith. It was quite interesting. Also, all the items in the store here has a biblical connection. A great place!

Following lunch on our own in the Jewish Quarter, we walked out of the Zion’s Gate and boarded the bus to the western part of the city. Our first stop of the afternoon was the Israel Museum. We saw three things here. First, a 1:50 model of Jerusalem as it looked like in 70 AD. We re-traced the steps of Jesus in and through the city that was populated by around 60,000 people. We saw the Temple (John 2, 7, 10; Mark 13, Acts 3, 5, etc…), the Siloam Pool (John 9), Herod’s Palace (Luke 23), and the two possible crucifixion sites, the southern steps, Robinson’s Arch, and many other locations.

Next, we walked through the Shrine of the Book where some of the Dead Sea Scrolls are displayed. We even saw two scroll jars from Cave 1. Lastly, we saw the highlights from the archaeological museum. This included artifacts such as the Dan and Pilate Inscriptions, Hazor’s and Arad’s cultic center, Asherah figurines, ossuaries, and Herod’s coffin (among many other things).

A box car used in the Holocaust, at Yad Vashem

We ended the day with a visit to Yad Vashem, Israel’s Holocaust Museum. While walking through the Valley of the Communities, Shlomo shared his story of losing 12 family members in Vilna, Poland as a result of the Holocaust. We also walked through the Children’s Memorial and lastly the museum on our own.

We returned to our hotel in Jerusalem for dinner and an optional walk on the Promenade. Before going to bed, we also had turned our watches forward one hour for Israel’s daylight savings.