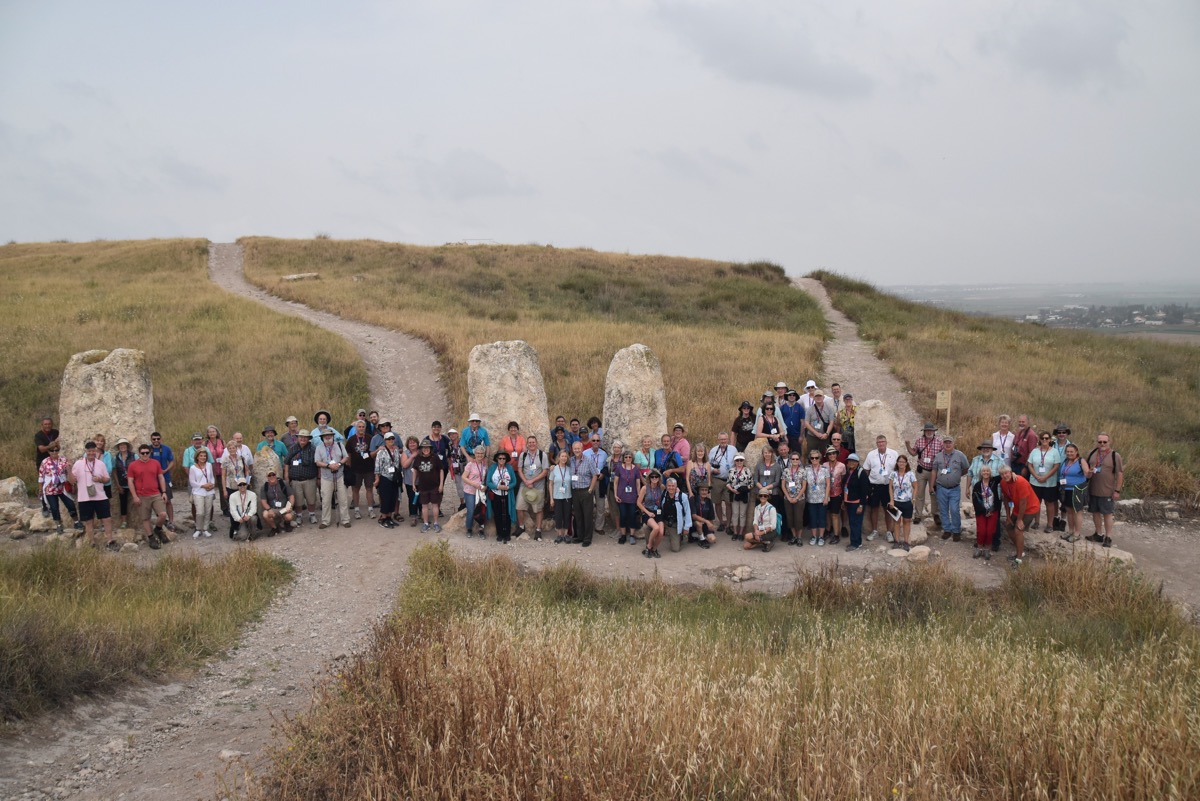 (Theme of the Day: Standing strong in God)

Today was our first full day in Israel. We were greeted with mild temps, with highs in the 70s. The morning was overcast (with a few brief showers), but the afternoon was partly sunny. Leaving our hotel along the Med Sea in Tel Aviv shortly after 7:30, we drove to the Shephelah (lowlands of Judah). We would spend the entire day here.

Gezer and Solomon’s gate (I Kings 9)

Tel Gezer was our first stop. Located along the Aijalon Valley, this archaeological site connects us to both the ancient Canaanites and Israelites. We read from Ecclesiastes 3 (“there is a season for everything) and I Kings 9 (about Solomon refortifying the city). Among the ruins we saw the Canaanite tower, wall, 6-chamber gate, and the water system. From the Israelite period we saw the 6-chamber gate attributed to Solomon. We even saw a replica of the Gezer Calendar discovered about 100 years ago here. Leaving the site we saw the standing stones of Gezer, most likely part of the Canaanite cultic practices.

The Sorek Valley from Beth Shemesh

Driving south to the Sorek Valley, we made a brief stop at Beth Shemesh. Reading from 1 Samuel 6 about the return of the Ark of the Covenant from the Philistines, we could see this incredible story come to life!  Samson was also from this area (Zorah). Although he married Delilah (from Timnah just a few miles west in the valley), God used him in amazing ways!

Gath, the Philistine city of Goliath

Continue south to the Elah Valley, we made a brief stop at Gath (Tel es-Safi). This was where Goliath was from. We also read from 2 Kings 12 about Hazael, the Aramean, who surrounded and conquered this city.  Here we saw some of the lower ruins of the city.

Qeiyafa and the Elah Valley (1 Samuel 17)

One of the newest archaeological sites is Kh. Qeiyafa. This was our next stop. Standing inside one of the city’s two chamber gates, we had a great view of the Elah Valley below. This was where David defeated Goliath. Reading from I Samuel 17, we took great joy in knowing that God helps us fight our battles of life when we entrust the difficult circumstances of life to His sovereign care. Passing by many of the ruins and casemate fortification wall, we exited through the other chambered gate. It is possible that this site was Shaaraim of ! Samuel 17:52.

The “bell cave” at Beit Guvrin

After eating lunch, we visited Beit Guvrin. This was our first national park. We walked to two caves. The first was the columbarium (designed for raising pigeons). The second was one of the bell caves. Here we listened to Shlomo share a song on his recorder. We also blended our voices together with two worship songs. The acoustics were fantastic! We also read form Micah 1 and 5 as this prophet was from this city (formerly called Moreshah).

Our last stop was Lachish. This was both a Canaanite (conquered by Joshua in two days, see Joshua 10) and Israelite city. In the late 8th century BC, the city was conquered by the Assyrians. Over 100 years later, the Babylonians came and destroyed the city for good. We read from Jeremiah 34:7, a text that matches perfectly with what one of 20 ostraca (Lachish Letter #4) said. Climbing the site, we saw the double walls and gates as well as the palace (probably built by Rehoboam, see 2 Chronicles 12).

Following a drive of about 50 minutes, we arrived in Beersheba, the primary city of the Negev. We checked into our hotel and enjoyed dinner. We also met briefly for a time of worship.

(Theme of the Day: Finding God in the Desert)