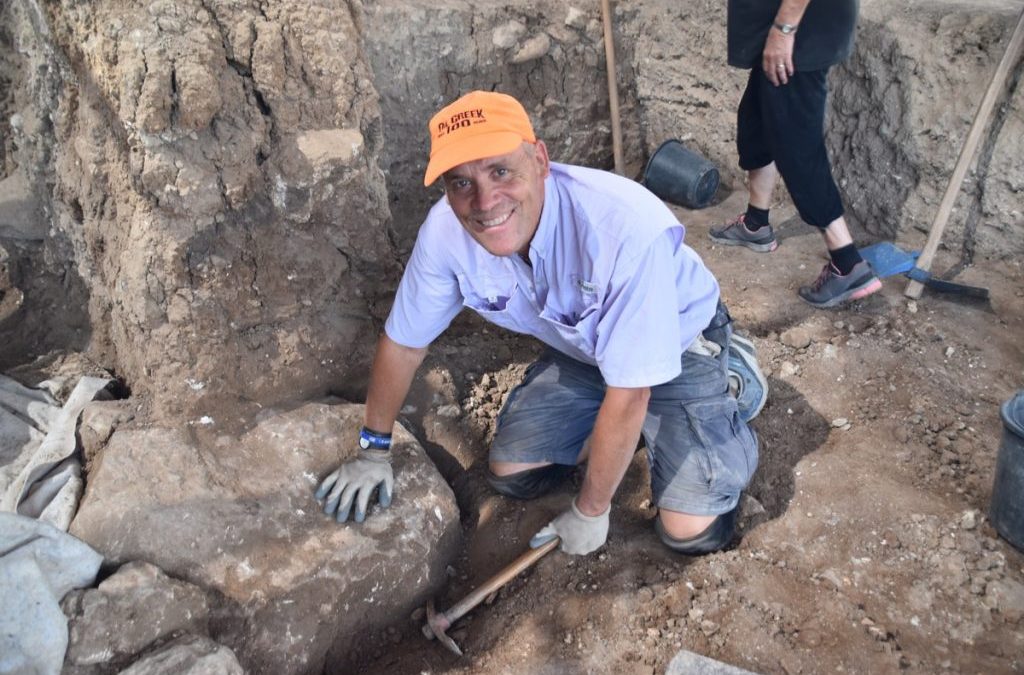 Today was my last day of digging at Tel es Safi/Gath. All went well, with some very confirming things discovered in our area. Once again, the sun was bright and temps were about 90.

Confirmation of a Gate?

A gate at Gath?

Most things discovered in archaeology boils down to how one interprets what is found. This implies that certain presuppositions go into deciding both where to dig and also whatto dig for. One of the primary objectives in Area D East was to determine whether the hypothesis of locating the city gates here is correct. With this being the 4th season of digging in this area, the question was whether the walls and other stone (and mud-brick) structures uncovered the last three years were indeed part of a gate? So far after this first full week of digging, signs are favorable that this working theory is correct.

What was discovered specifically in our area (as well as in the adjacent square to the east of us) was a series of stones that seem to be patterned in a way that resembles both a chamber of a gate as well as the floor & steps leading into the gate. Some of these stones were massive, perhaps used as a sofsal (bench) were the gate keeper, official, or judge. Other stones were small, perhaps suggesting that these were used as the pavement or steps leading up into the city.

The dating of all of this covers three apparent phases: Iron Age I (the 11th century wall), Iron Age I A (the stone gate, 10th century, incorporated into the 11th century wall), and later int he Iron Age I (the mud-brick walls that, as it is suggested, were temporary walls built across the entrance of the stone gate for extra fortification against Hazael. See 2 Kings 12:17. These walls that date to the 9th century). This means that these structures are built by the Philistines who lived here up until 830 BC when Hazael destroyed the city. Incidentally, much of our work in this square was to actually remove most of this 9th century mud-brick wall in order to find out what is underneath. This wall was also built on simple fill, suggesting that built quickly.

Both archaeologists (Dr. Maier and Dr. Chadwick) are quite optimistic about what was uncovered this first full week of digging.

Among some of the finds in our square included a lot of pottery again, another oil lamp, and a flint stone used as a utility knife.

Before leaving the site, we were led on a site tour of all the areas being excavated. We visited Areas K and M. These were brand new areas just opened up this week. By the use of magnetometry, it is possible to actually see walls may be located under the ground. So far in just a week, the top of one of these stone wall structures was found just about a foot under the ground. These stone structures also link us to the Philistines.

Return to the Kibbutz

We returned to the kibbutz at 1:20. It was a successful week of digging at Gath! We left behind a huge dirt pile of earth removed from our squares. But we took with us a sense of understanding biblical history that much more! Once again, archaeology continues to confirm the historicity of the Bible!

For updates on the rest of the trip, go HERE. This site will be updated periodically over the next few weeks.

For more pictures from today, see below.