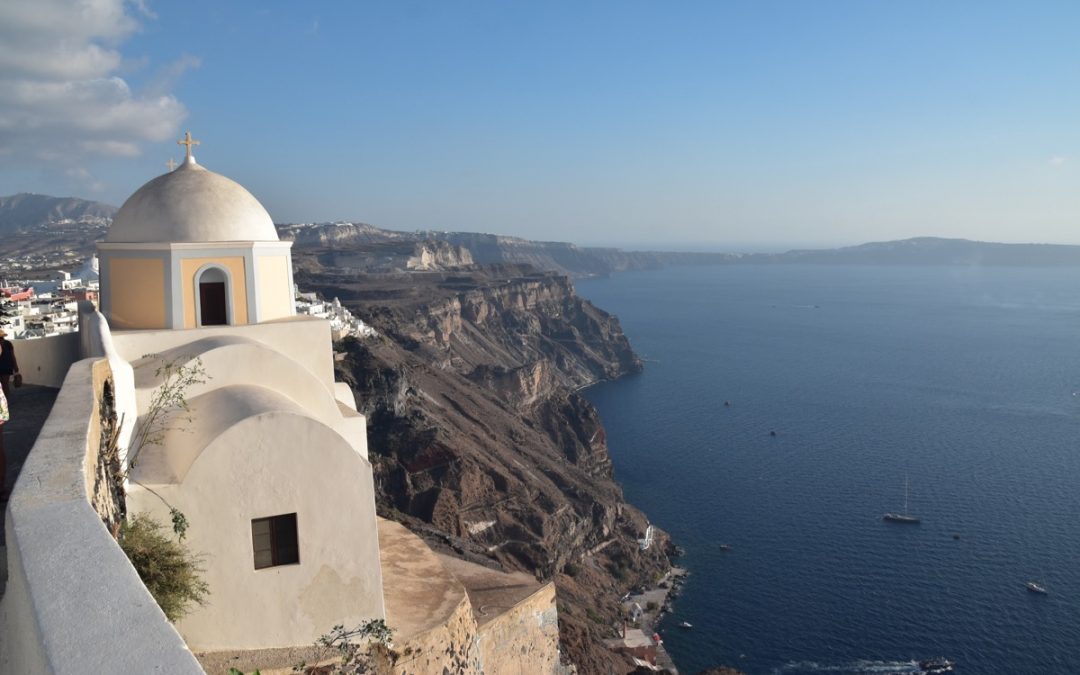 Today we awoke at our arrival time into the harbor of Heraklion on Greece’s largest island, Crete. About 600,000 people live here (more like a million in the summer). The weather was a mix of sun and clouds today, with temps in the 80s.

“Today was another mix of history and the sheer beauty of God’s creation!  Starting at the Minoan Palace of Knossos and ending at the top of Santorini for a spectacular sunset made for a great day!”

After breakfast we departed the ship and boarded our bus to the Knossos Palace. The ancient Minoans established this site in about 3,000 BC (contemporary with Abraham in Mesopotamia). The best preserved ruins that we saw date to around 2,000 BC when the palace was rebuilt. The ancient Minoan civilization came to an end in about 1450 BC due to the volcano eruption at Santorini.

At this archaeological site we saw the throne rooms of King Minos and the queen, many colorful frescos on the walls of other buildings, uniquely shaped pillars, and large clay pithio (storage) jars. Most of these ruins have been reconstructed with only replicas of the frescos. The palace was designed as a labyrinth.

Following visiting the archaeological sites, we bused back to the center square of the port city of Heraklion. 180,000 people live in this city. We enjoyed about an hour of exploring the shops and stores on our own. Some in the group purchased the famous olive oil. The island produces some of the best olive oil in all of Greece here. Part of the modern city is still surrounded by the Venetian walls dating to the early 13th century (1204 AD). Also, a Venetian harbor-fortress is also still standing out along the blue-green waters of the Aegean Sea. Later on, the Ottomans would occupy Crete in 1669.

We boarded back on the ship about 11:30 for lunch and a free afternoon.

About 3:45 the much-anticipated arrival to one of Greece’s most beautiful islands came. Santorini is an island built high on the cliffs of an ancient volcano that erupted in 1,450 BC. As the ship slowly sailed into and set anchor in the bowl of what was a volcanic mountain, the scenery was breathtaking! From here we took tender boats to the shoreline.

Upon reaching the shoreline at about 5:30 some ascended to the top by cable car, while others walked up the donkey path. From here we ventured off on our own, taking in spectacular views of this city built literally on the rim and top of the mountain. The sunset was equally incredible out over the sea. Many took the time to grab a bite to eat in one of the many “restaurants with a view” of the water below. Even after the sun set, the lights of Santorini are amazing to encounter!

On our own we made our way back to the tender boats and to the ship. We picked up our passports from the reception and retired for the evening. Tomorrow we arrive back in Piraeus, the port of Athens for our last day of touring this capital city of Greece.