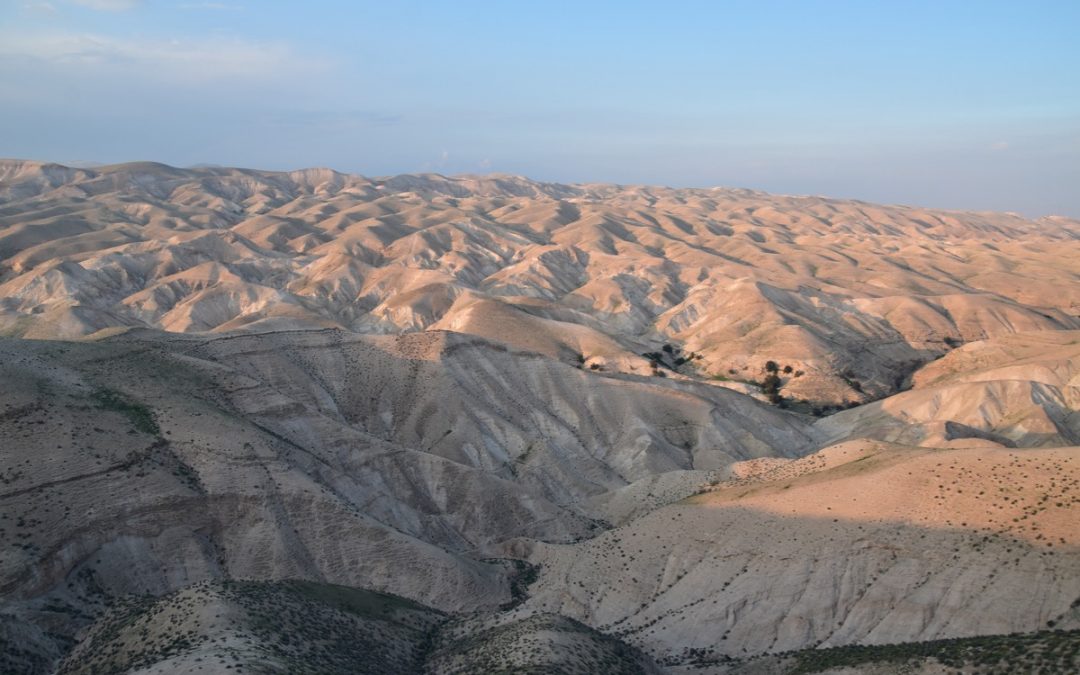 Today was a day spent in the Judean Desert along the Dead Sea. The weather was sunny and warmer, with temps in the 70s, with cooler temps in Jerusalem when we arrived at the end of the day. The day included a few optional hikes too!

The day started with a pre-breakfast “float” in the Dead Sea. It was a great experience with the sun rising over the Jordanian mountains. It was beautiful!

Driving north about 15 minutes, Masada was our first site of the day. We read from Psalm 18:1-2 on the way, remembering that God is our “fortress” (metzada in Hebrew). We took the cable car to the top of this palace-fortress built by Herod the Great. About 75 years after Herod, 967 Jews found refuge for three years on Masada from the Romans. We saw palaces, cisterns, the case-mate wall, the Roman ramp, and the synagogue. Leaving the site, about a third in the group enjoyed walking down the Snake Path.

“Spending the entire day in the Judean Desert was very neat. What surprised me so much of the three sites we saw was how much water Engedi has!  The end of the day overlooking the Wadi Qelt was amazing! The view was incredible, plus ‘Isaiah the prophet’ popped out of no where and shared! What a great backdrop for his message.” -Tour member-

Continuing north along the Dead Sea, Engedi was our next site. Walking into the canyon (Wadi David), we stopped briefly to read from Songs of Songs 1, 2 Chronicles 20 and 1 Samuel 24. This last passage highlights the story of David hiding in a cave from Saul. We then walked back to some of the water falls. It was amazing to see this much water here in the desert. Some also saw some ibex here (Psalm 104).

Our last site to visit for the day was Qumran. This is the most important archaeological site in all of Israel because of the Dead Sea Scrolls being discovered here in 1947! These scrolls date from the 1st century! During the lunch hour, nearly half in the group hiked to Cave 1 where the first scrolls were found (including the Isaiah Scroll). We then visited the small archaeological site. We celebrated the preservation of God’s Word over the last 2,000 years. We read from Psalm 151 (an extra psalm found in 1956 in Cave 11). We also read from Psalm 19 and 2 Timothy 3. Leaving the site we saw the miqve that was damaged in the 31 BC earthquake mentioned by Josepheus.

On our way to Jerusalem, we made a brief stop overlooking Wadi Qelt. This is the heart of the Judean Desert. With the sun going down, the view was spectacular!! Here we heard the words of Isaiah 40 echo through this chalk-limestone desert.  We also heard Shomo sing Psalm 23. Both passages use the Judean Desert as the backdrop! Jesus spent 40 days being tempted in the desert. John the Baptist also served in this region, proclaiming the same words that Isaiah did! Our hearts rejoiced in God’s redemptive history.

It was exciting to finally ascend to Jerusalem, the capital of Israel. After checking into our hotel, we enjoyed dinner together followed by an orientation walk to the famous Western Wall. It was a great walk and experience!  We are excited to be in Jerusalem for the next three days!