Today was a day to visit and explore sites outside of Jerusalem. The day first took us to south of Jerusalem (to Bethlehem) and then west of Jerusalem (to the Shephelah or Lowlands of Judah). The weather was overcast with a few showers…

Leaving again around 7:30, we drove about 5 miles south to the Bethlehem area. Our first stop took us to Beit Sahour just east of Bethlehem. The traditional shepherds’ fields are here. Descending into a cave, we talked about the role of shepherds and that “just at the right time God sent His Son” (Gal. 4:4). We celebrated the fulfillment of redemptive history in Jesus’ birth. We also read from Micah 5 and Luke 2. Singing Christmas carols in the chapel was also special!  We then drove into Bethlehem and visited an olive wood shop and store. It was interesting to see how they carved the wood.

Driving west, we descended down into the Shephelah (lowlands) of Judah. Overlooking the narrow section of the Elah Valley, we read from I Samuel 17. It was here where David fought Goliath. With the Philistines occupying one hill, and the Israelites the other, the battlefield was right in front of us!

“Today we had a bit of rain but we still went to lots of sites in the Bible. My favorite site was the Elah Valley. It was neat to see the specific area in the valley where David defeated Goliath.” -Tour Participant-

Driving north to the Sorek Valley, we stopped into a new mall for lunch. Many had pizza, while others had a burger from McDonalds! Near by is the ancient site of Beth Shemesh. On the top of the tel, we learned (from Judges 13-16) that Samson was from this area (specifically Zorah). We also read from 1 Samuel 6 about the return of the Ark of the Covenant to this city from the Philistines at Ekron.  We returned back to the buses just before the skies opened up with lots of rain!

Driving south we visited Beit Guvrin. In between the rain drops we walked into one of the soft limestone Bell Caves. There are 100s of caves in this area. In this large carved-out cave Shlomo shared a song on his recorder. We also sang a few worship songs here too. Close by we also descended down to a columbarium cave where pigeons were raised. About 2,000 niches were carved into this cave.

It rained on the way to our final site, Lachish. Shortly after we arrived, thankfully it stopped and cleared. This Canaanite site was first destroyed by Joshua (Josh. 10). In the end of the 8th century BC, the Assyrians destroyed the city (Isaiah 36-27, 2 Kings 19-20). After the Judeans re-settled the city, the Babylonians came 120 years later. Lachish was one of the two last-standing cities remaining (Jer. 34:7). The Lachish Letter #4 (found in 1935) confirms this.

We returned to out hotel in Jerusalem for dinner and a free evening. 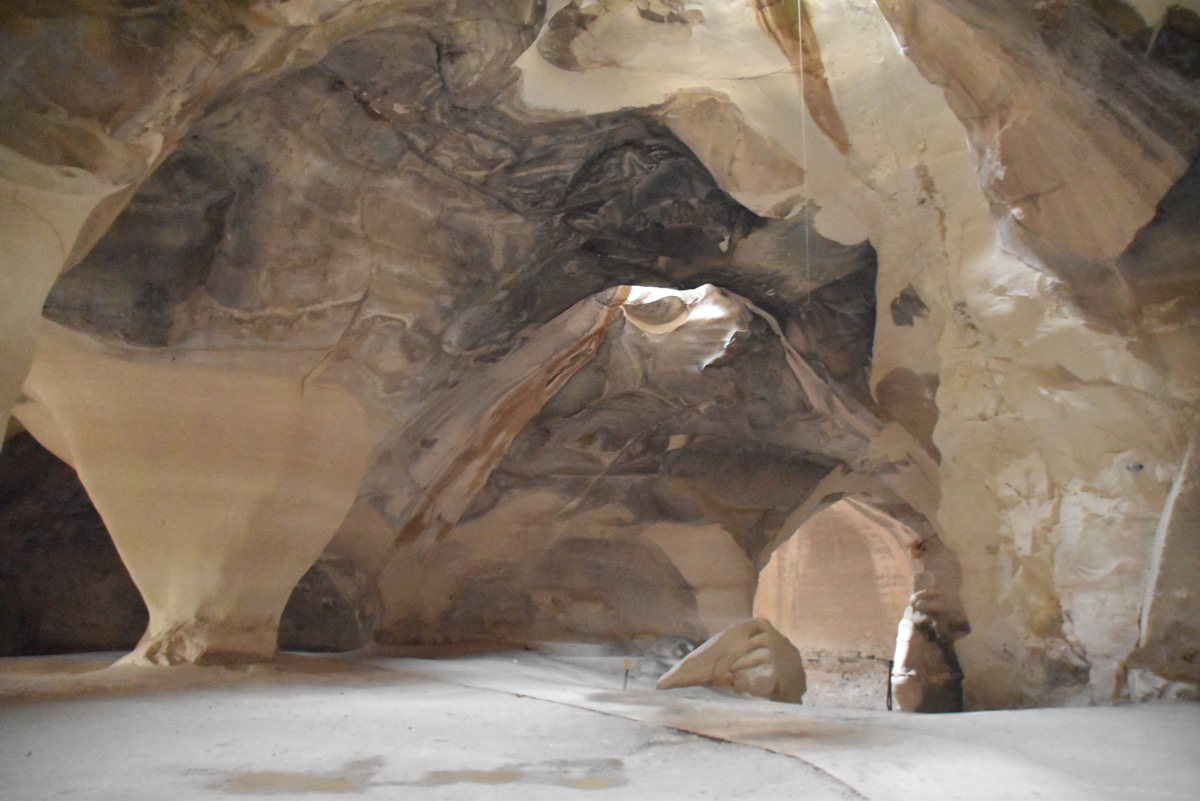