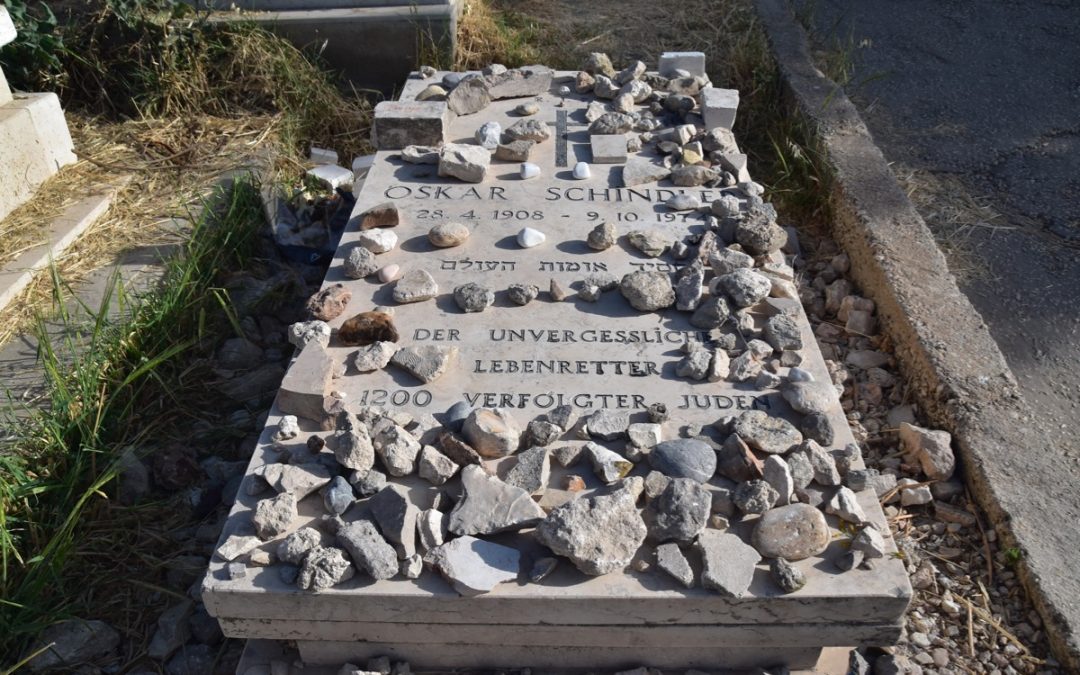 Today was another hotter day, even here in Jerusalem when temps aren’t as hot as the rest of the country. The highs today on this sunny day were in the low 90s.

Starting at shortly after 7:30 again, our first visit was to the Catholic cemetery where Oscar Schindler is buried. We walked to his grave together, placing a stone on his grave. He help save 1,200 Jewish lives during the Holocaust. He died in 1972.

Walking into Zion’s Gate, we visited the famous Western Wall of Jerusalem. This wall served as a retaining wall for Herod’s Temple as it was expanded from its former size. Today, the Western Wall is revered as the most holy place for Jews because of its close proximity to where the Holy of Holies was in the days of the 1st and 2nd Temple. After going down to the Wall and observing the many Jews praying here, we walked through part of the Rabbinical Tunnel. Here we saw massive stones remarkably and carefully place. A few stones weigh over several hundred tons!

Climbing back into the heart of the Jewish Quarter, we entered a store called Shoreshim owned by two Orthodox Jewish brothers. Here, Moshe (Moses) shared with us about his Jewish faith. It was an interesting encounter, learning a bit more about Jewish theology and practice. Their store is filled with all kinds of great items too, all with a biblical connection!

“Today was another incredible day. From the Western Wall to Yad Vashem (Israel’s Holocaust museum & memorial), the day invoked a whole range of emotions. I can’t believe we have only more day full day left in this trip!”  -Tour Member-

Following lunch on our own in the Old City, we walked back out of Zion’s Gate where we met our bus. We drove to the Israel Museum where we saw three things: a 1:50-scale model of Jerusalem as it looked like in 70 AD, the Shrine of the Book where some of the Dead Sea Scrolls are displayed, and the archaeological wing of the museum. Again, we made connections with the Bible.

Our last stop of the day was Yad Vashem. This is Israel’s Holocaust Memorial & Museum. The name (and “hand and a name”) comes from Isaiah 56:5 – “I will give them an everlasting name that will endure forever…”  Emotions surfaced as we listened to Shlomo’s family history. With his family living in Vilna, Poland, Shlomo lost 12 family members in the Holocaust. Among this things we saw here was the Avenue of the Righteous (including trees planted in honor of people like Corrie ten Boom, Oscar Schindler, and at least 20,000 others), the Children’s Memorial (1.5 million children died), and the museum itself. It was a moving experience to be here.

We returned back to our hotel for dinner and an option walk to Ben Yehuda Street for some non-traffic shopping, coffee, and ice cream. It was fun to experience one of Jerusalem’s modern hang-out areas!