Today was our first full day here in Israel. After a great buffet breakfast, we loaded and boarded the bus. We started our day with Psalm 100, prayer, and a few songs (“Oh, the sun’s coming up…”). The weather was warm and overcast most of the day, with highs in the low 80s. And with the “Gaza situation” ending, we proceeded with our original itinerary for the day.

Driving to the Shephelah from the Tel Aviv/Coastal Plains, we arrived at our first site, Gezer. This was a large 35 acre Canaanite and Israelite city. At the site we saw Canaanite ruins (a large fortification tower, water system, and gate) as we as a gate built by Solomon among the Israelite ruins. We read from Joshua 10 (moon standing still over the Aijalon Valley) and 1 Kings 9 (Solomon re-fortifying the city). With the discovery of the Gezer Calendar (about the ancient agriculturally seasons of the year), we also read from Ecclesiastes 3 about the seasons of life. Leaving the site, we walked past the standing stones of the Canaanites.

Driving south to the Sorek Valley, Beth Shemesh was our next site to visit. At this OT site we recalled the life of Samson (born in Zorah across the valley) from Judges 13-16. Further west in the valley was where Timnah was located. We also read 1 Samuel 6 about the Ark of the Covenant being returned from Philistines hands to Beth Shemesh. We could see it happening right before our eyes! Some entered down into a cistern here, one of 100s in the area of this biblical city. After visiting the ancient site, we enjoyed lunch at a local new shopping mall.

“What a great first day. We saw five sites that connect us to stories in the Old Testament. My favorite was seeing where David fought Goliath from a site called Qeiyafa. It was incredible to see where this took place. Life-changing already!” – Tour Member- 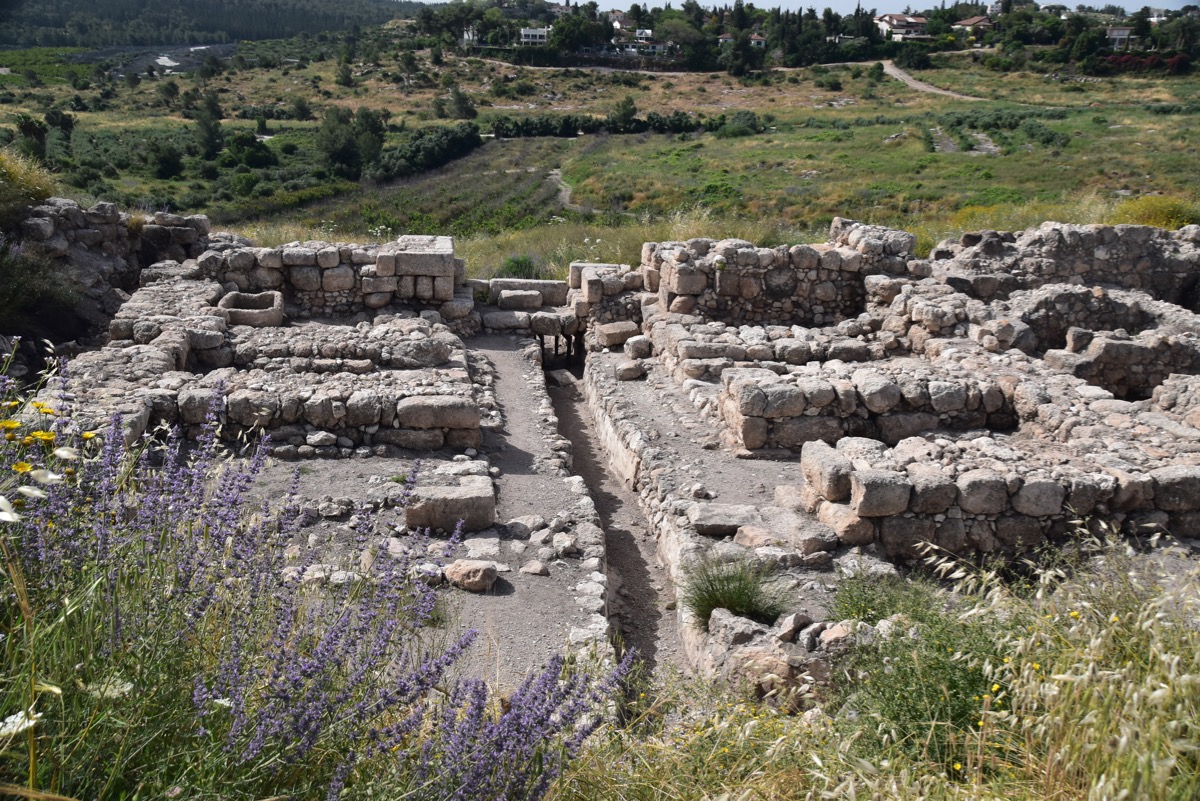 The newer archaeological site of Kh. Qeiyafa was our next stop. Located along the Elah Valley, this ancient “one-occupation” site may have been Shaaryim mentioned in the Bible. While David drove us almost to the top of this site (over a very poor dirt road), we walked the rest of the way ourselves to one of the two gates of the city. With a great view of “battlefield,” we read from 1 Samuel 17. It was in the narrow part of the valley where David defeated (and killed) Goliath, the Philistine giant. Praise God that He still brings us victories in our lives when, like David, we place our faith and trust confidently in Him!

Driving further south to the Beit Guvrin Valley, Mareshah was our next visit. This served as the home of Micah the prophet. We entered two caves. First, the columbarium cave (that held 2,000 pigeons) and the bell cave. Shlomo played his recorded here. We also sang a few songs. We read from Micah 1 and 5.

Our last site of the day was Lachish. This was another Canaanite and then later Israelite city. Joshua took the city in two days (Joshua 10). Later, Rehoboam re-fortified the city (2 Chr. 11). Still later, the city was destroyed twice more. First, by the Sennacherib and the Assyrians (in 701 BC, the siege ramp can still be seen), and second by the Babylonians in the early 6th century BC. We saw the double walls and gates of the city as well as the palace of Rehoboam. We read from Jeremiah 34:7 and learned about the Lachish Letter #4.

From here we drove about 50 minutes to Beersheba where we checked in, enjoyed dinner, followed by a brief gathering of worship and preparation for the trip down into the Sinai tomorrow!

NOTE: This day will probably not updated until Wednesday night due to the journey into the Sinai and the night-time climb of the mountain!