Today was our last full day in Greece. It was another bright and sunny day, with temps in the low 80s. Visibility was again excellent as well.

After another great breakfast at the hotel restaurant on the rooftop, we departed about 8 a.m. We drove south to the Peloponnese of Greece. First we stopped at the famous Corinthian Canel. It was built over a 11 year span (1882-1893) and is 3.8 miles long, 85 feet wide, 300 feet deep, with the water level around 26 feet.

We then drove another 15 minutes to the ancient site of ancient Corinth. Among the ruins we saw the Temple of Apollo (one of 14 total pagan temples), the forum (agora in Greek), and the bema (judgement seat). Paul was here for 1.5 years during his 2nd mission journey. From here he wrote letters to the Thessalonica church. During his brief stay here at the end of his 3rd mission journey, we wrote Romans. It was delivered by Phoebe (Romans 16). We read from Acts 18 about Gallio and 2 Corinthians 4. We also walked down to the area of the theater where we saw the Erastus Inscription (he donated his own money for the public works, see Romans 16:23). Before leaving Corinth we drove to the Acropolis for a peak of the Temple of Aphrodite and a spectacular view of the plain of Corinth below.

“It was incredible to stand inside the city of ancient Corinth today. Just to think Paul was here for 1.5 years!  He saw the agora, all the temples, and the ‘bema.’  We saw all of this too. Very special!  -Tour member- 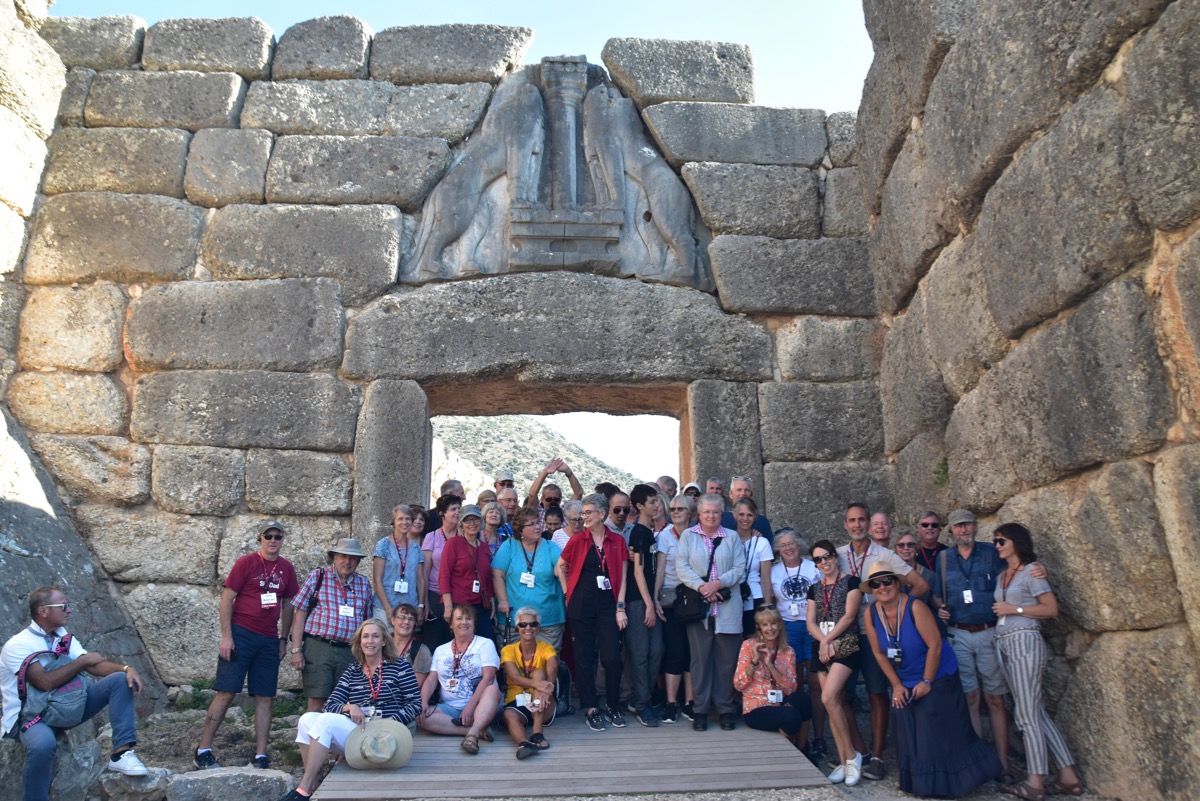 From here we drove to Mycenae. We first enjoyed a late lunch here before visiting the ruins of this ancient city. Much of what we saw dates from 1,350 – 1,200 BC. At the site we saw the famous Lion’s Gate (1,250 BC), the shaft tombs (where over 30 pounds of gold was found in the 1870s excavations), the palace area, and the cistern. We also saw the Bee Hive tomb of King Agamemnon (or the Treasury of Atreus). We enjoyed singing a few worship songs in the tomb.

Leaving Mycenae at about 5:30, we returned back to our hotel in Athens for a late dinner. We past Cenchreae (Acts 18) on the way. Since most of us fly on an early flight to either to Rome or home, we all retired early. We leave for the airport tomorrow at 5 a.m.