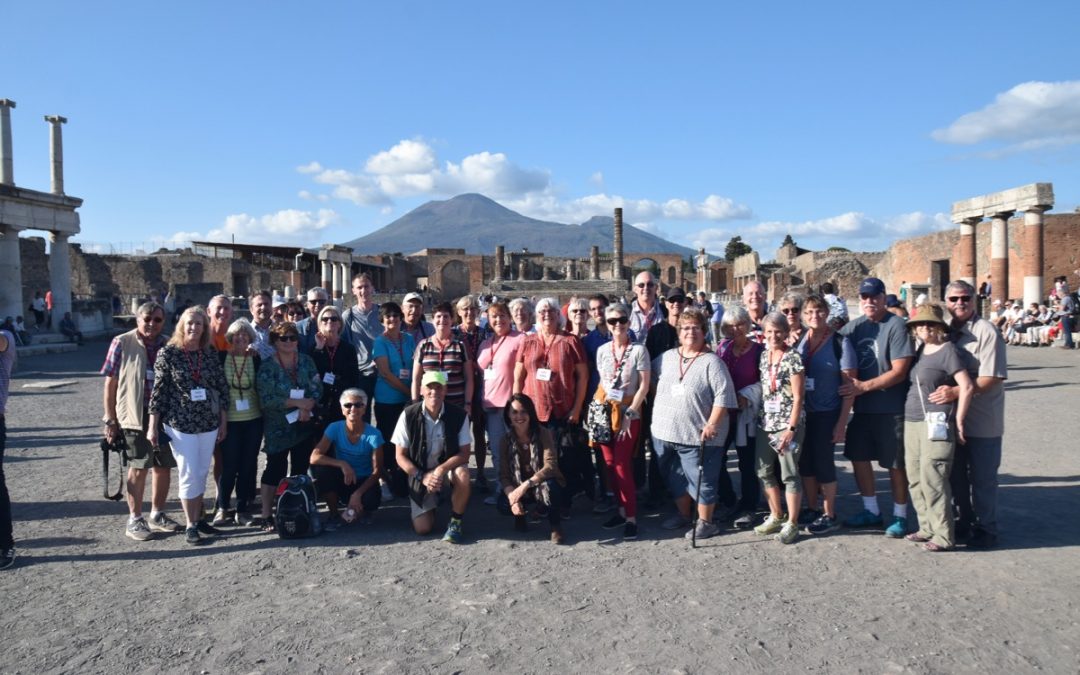 Today, 34 of us flew to Rome, Italy the optional trip extension to Italy. Others in the group either flew back to the States or extended their trip on their own. Once we landed in Rome, the weather was partly sunny, with highs in the 70s.

Waking up at 4 a.m. today, we all gathered our belongings. We grabbed a coffee and a quite bite to eat before loading the bus at 5 a.m. With Tassos’ help, we drove to the airport for our flight to Rome. The procedure was quite quick and easy.

“We got up early today to fly to Rome. We then drove to Pompeii. Wow, what a huge site! Many of the ruins are so well preserved, especially the frescos.”  -Tour Member-

At about 9:30 we landed in Rome. After grabbing our luggage we met our Italian driver (Mario) and tour operator (Danilo) and drove directly to see the spectacular archaeological ruins of ancient Pompeii. Along the way we enjoyed the beautiful countryside of the southwest side of Italy. Upon arriving, we enjoyed some oven-baked Italian-style pizza!

The city of Pompeii was first established in the 6th century BC. It became a large Roman city about 20,000. In 79 AD, Mt. Vesuvius erupted, causing the entire city instantly. Excavations began as early back as 1748 (through about 1925). Our local guide, Teresa, did a wonderful job leading us around this large 168 acre city preserved in time. Among the ruins we saw the theater, the Cardo and Decomanos (the two main streets of the city), numerous frescos, the bathhouse, ovens, fountains, and the Temple of Jupiter, Juno, and Minerva. Of course we also saw a number of casts representing the figures of humans (and animals) who lost their lives suddenly due to the eruption.

Following our visit of Pompeii, we drove back to Rome. We checked into our hotel and enjoyed dinner a late but wonderful sit-down together. We are looking forward to two full days here in Italy’s capital city.