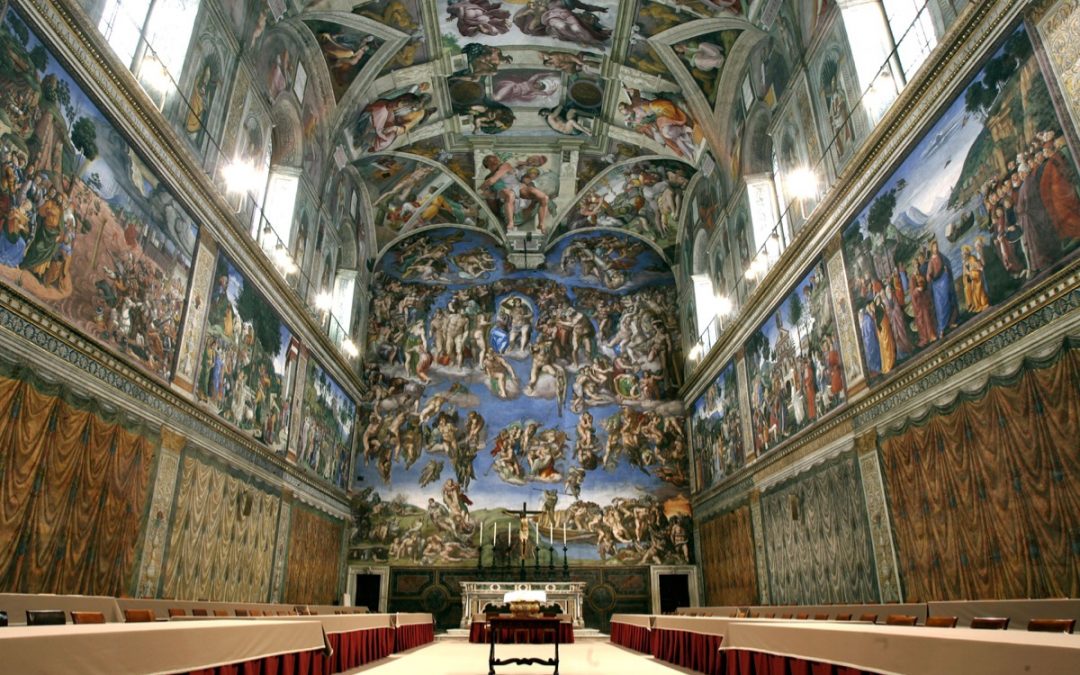 Today was our last day here in Rome. The sun and perfect temps (low 70s) made it ideal for all the walking we did today once again.

We left the hotel at 8:00 today. We drove directly to the Vatican where we visited the museum and Sistine Chapel. About 850 people live in the “Vatican” today, the world’s smallest official “state.” Getting into the Vatican with special “VIP” status helped us avoid the hours-long lines. Upon entering, we got our first glimpse of St. Peter’s Church.

Walking through the museum was packed with people. It was filled with ancient artifacts, tapestries, and maps was breath-taking. Even the ceiling of the hallway is amazing! Finally we arrived at the Sistine Chapel. The uncle of Pope Julius II built it in 1483 when Michelangelo was only five years old. So many of his teachers began painting the images in the chapel. The ceiling was left blue, with golden stars until Michelangelo began his masterwork in 1508. He was 37-38 years old at this time. It took him four years of painting the ceiling. Much later, we also spent another five years to complete the Last Judgment scene on the front wall of the chapel. The chapel is simply stunning!

“Easily today my favorite place was the Sistine Chapel! I was blown away by this place, with all the detail that Michelangelo  added to this painting. The ceiling was more than stunning!”  -Tour Member-

Leaving the chapel we entered St. Peter’s Basilica. It is the largest in the world. The original church was built in 319-326 AD, but the present church was built in 1504. It took 120 years to complete! When Michelangelo was 73, he started designing the dome of the church, the largest in the world. As we walked through the church, we saw the famous Pieta sculpture of Mary holding the crucified Jesus. We also saw the remains of a few popes who earned “sainthood” after their deaths. Leaving the church we entered Vatican Square. It is a large gathering place in front of the church itself.

We board the bus and drove to our lunch area. Today many restaurants and shops crowd the area of what was an ancient stadium. A large fountain in the middle of this area marks this popular area. After lunch we walked to the Pantheon. This was first built as a small pagan temple by Marcus Agrippa around 30 BC. 150 years later, Hadrian enlarged it in the early 2nd century AD. It is the best preserved Roman structure in Italy! The ceiling is made only of cement. Uniquely, there is a large hole/opening in the middle of this ceiling. In the 6th century AD, it was converted into the Church of St. Mary.

We continued our walk straight to the Trevi Fountain. There was a large crowd around this famous tourist attraction. The date of the building of the fountain is 1735-1765. Many of us enjoyed eating gelato in front of the fountain and doing some last minute shopping. Here we also said goodbye to our guide, Paulo.

Lastly, we walked past the Spanish Steps on our way back to the bus.

We drove back to the bus for our last dinner together. After dinner we retired for the night in preparation for our early departure tomorrow morning back to the States. While our legs are tired for these last two days of walking, we saw so very much here in Rome!

We plane to transfer in 3 stages to the Rome Airport for our various flights back home.