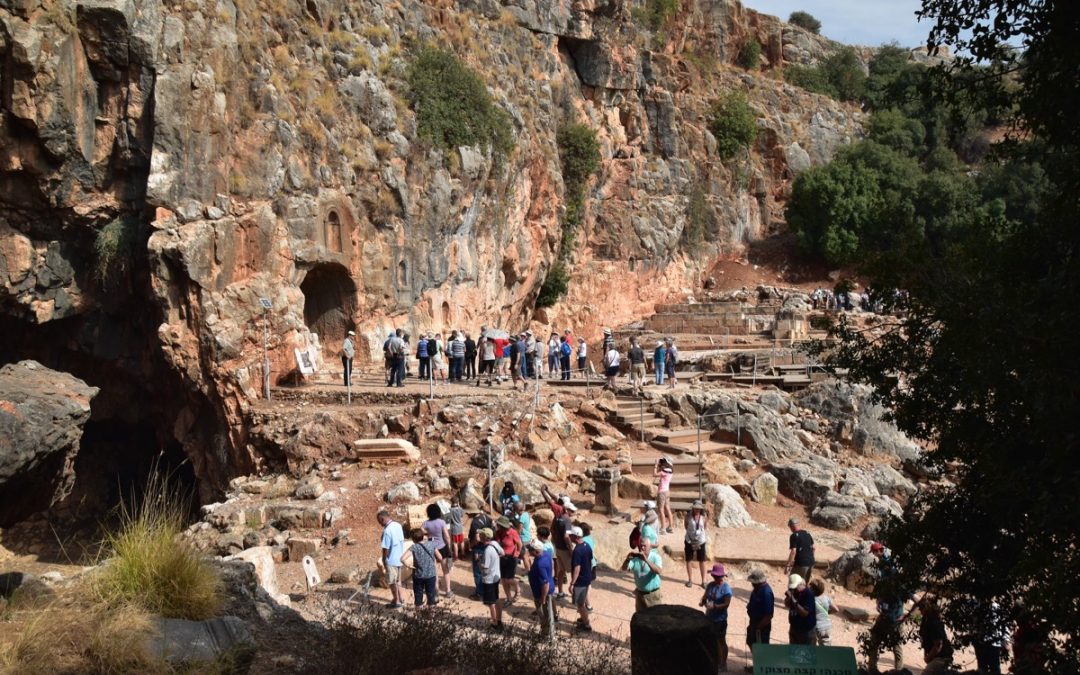 Biblical Israel Ministries & Tours (BIMT) is all about teaching the Bible in the context of the land of Israel and other biblical countries (Jordan, Egypt, Turkey, Greece, and Italy). There are over 100 biblical sites in Israel alone that have been excavated. Caesarea Philippi  is one of them.

Below you will see one of our latest YouTube Bible teachings. In this video we drive about 35 miles north of the Sea of Galilee. Caesarea Philippi was named, in part, after one of the three sons of Herod the Great in honor of the emperor Caesar. The city was very pagan. It had multiple temples, the Temple of Augustus being the largest. The site also celebrated Pan, the Greek and Roman shepherding god. Later, shrines also were dedicated to Zeus, Nemesis, and the dancing goats.

Jesus took His disciples to the region of this city. Most likely Jesus would not have gone into this city. Somewhere in this northern region Jesus asked, “Who do you say I am?” Peter replied, “You are the Christ, the Son of the Living God.” Jesus placed authority upon Peter (and the other disciples) to lead His Church after Jesus’ death, resurrection, and ascension. Six days later, Jesus was transfigured. It may have been on the nearby slopes of Mt. Hermon or back in the Galilee area.

“Jesus’ ‘final exam’ question He shared with His disciples was, ‘Who do you say I am?’ Wow, what a zinger of a question, yet a very important one. Jesus was preparing His disciples for being leaders in the early church!!”

All of our video teaching take you to actual biblical sites. You will walk through these sites with me. I hope that this teaching about Caesarea Philippi will help you learn about the Bible in the context of the land of Israel. Go HERE to see all our YouTube teachings and videos.
By the way, while this teaching video below does not include any drone footage of this site, we have produce a resource that does. It is called Biblical Israel By Air. In August (next month!) you will be able to purchase a copy of Biblical Israel By Air from our web site: www.biblicalisraeltours.com. It will be available in a DVD format (720 resolution), Thumb Drive (1920 x 1080 resolution), and eventually by download. Also coming in the future for download only will be drone video of the individual sites covered in Biblical Israel By Air video. Stay tuned!
We also invite you to join one of our upcoming trips as well! Stay tuned for updates too!
In the meantime, enjoy this teaching video.
Shares