Today was another brilliantly sunny day, with wonderful temps in the 70s. We have appreciated so far this dry weather pattern here in Israel. After a modest breakfast (because of Shabbat), we headed to Qumran. We read from Luke 10 as we departed Al Mog, the kibbutz were we stayed last night.

The most significant discovery in all of Israel were the Dead Sea Scrolls at Qumran in 1947. We arrived here at about 8 a.m. We walked up to the edge of the cliffs of the Judean Desert to see Cave 6, one of 12 caves in which fragment of scrolls were found. At the site itself we saw many miqvot (plural for mikve, or ritual baths), cisterns, and the scriptorium. In front of Cave 4 (and 5 & 10), we read from Psalm 19 and “151,” an extra psalm found here. We also remembered 2 Timothy 3:16 about God’s inspired Word. Thanks be to God for the preservation of His Word and the joy, instruction, direction, and hope it provides us!

We traveled north from here along the Jordan Valley to Beth Shean. The ride took about an hour and a half. This ancient site is an incredibly large site, with many ruins from the Roman Period. We saw colonnaded streets, the bathhouse, agora, public latrenes, and the theater. Some in the group climbed to the top of the OT site. According to 1 Samuel 31 (and 1 Chronicles 10), the body of Saul was hung on the walls of the town square after he died on near by Mt. Gilboa. The men from Jabesh Gilead (located on the east side of the Jordan Valley), came at night to rescue the body of Saul.

Located along the edge of the Jezreel Valley is Megiddo. We first ate lunch when we arrived. This archaeological site was about 25 layers of occupation spanning a period of about 2,500 years! It was a Canaanite and Israelite city. Pharaohs like Thutmose III conquered it in 1468 BC. Climbing the site, we saw 3 series of city gates, Solomon’s stables and palace, a sacrificial altar from the Early Bronze Period, and a grain silo. We left the site be descending down through the water system that was engineered to bring water safely inside the walls of the city. We also had a great view of the Jezreel Valley referred to as the Valley of Armageddon in Revelation 16. In the end, God wins when Jesus returns!

“Wow…. it was another great day here in Israel. We started the day in the Jericho area, but arrived in the Galilee tonight. The experience has been  wonderful so far. Now we begin to retrace the footsteps of Jesus! Can’t wait!” 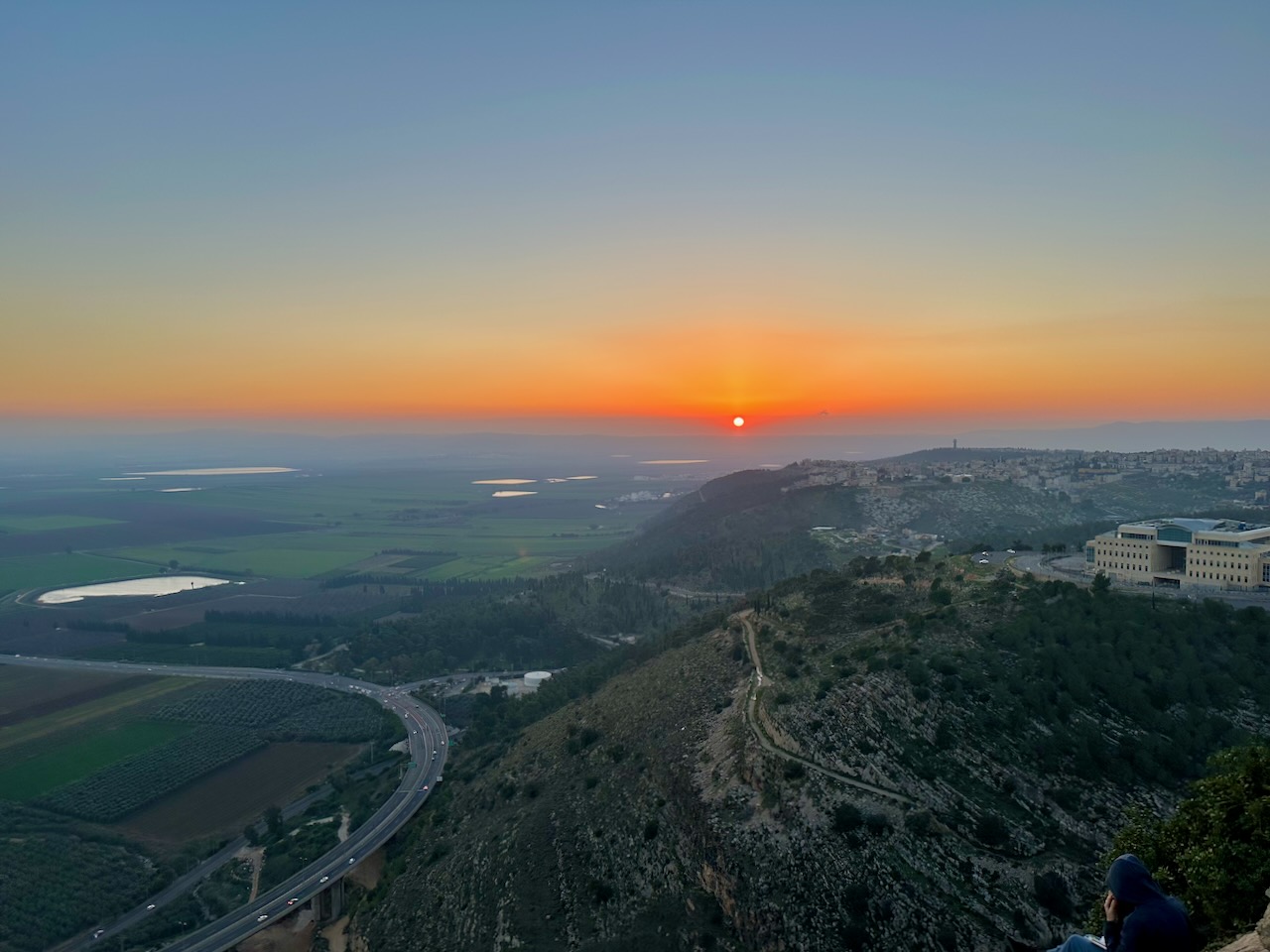 We drove north across this broad valley to get to the Precipice of Nazareth. The visibility from here of Mt Tabor (Judges 4), the Hill or Moreh (Judges 7), and Mt. Carmel to the west (1 Kings 18) was impressive! We could even see the Hills of Gilead across the Jordan Valley (in Jordan today). We considered the life of Jesus as read from Luke 4 and John 1. We listened to Jesus Messiah as the sun set to the west.