We work up to a beautiful sunrise this morning on the Sea of Galilee. It was another perfect weather day, with full sun and highs around 75. We spent the entire day around the Sea of Galilee, visiting sites connected to Jesus and His ministry. Following breakfast, we departed at 7:35 for our first site, reading Matthew 4 on the way!

We traveled around the north end of the lake, passing by traditional sites connected with Jesus. We also passed by two possible locations for Bethsaida, the home of Peter, Andrew, and Philip (John 1). The Feeding of the 5,000 took place in a remote area near this fishing village. We then turned south on the east side towards Hippos/Sussita. On the way we made a brief stop to see the cliffs mentioned in Mark 5. At Hippos (a Decapolis city), we saw many Roman ruins. During the Byzantine Period (4th-6th centuries AD), there were no less than a half a dozen churches were built here. With a great view of the lake, we read the transformational story of the demoniac from Mark 5.

Following our visit at Hippos, we drove to the southern end of the lake to Yardenit. About 20 in the group reaffirmed their faith as they were immersed in the waters of the Jordan River. For a few it was their first and primary baptism. The water was a bit cold, but the experience warmed our hearts.

From the southern end of the lake we now drove north along the western shoreline of the lake. We included an extra stop at the Kinneret Cemetery. This is where an early Jewish pioneer woman named “Rachel” is buried. She was an Ukrainian Jew who wrote poems, some of which were put to songs. She died in 1931.

From here we drove to the Plain of Genesseret. Following a very tasty fish and salad lunch we visited the ancient city of Magdala. This was a large Jewish city in the days of Jesus. We saw a modest 1st century synagogue here. Although the city is only mentioned once (Matthew 16), Jesus must have taught here. We  saw a few more ritual baths as well.

“Today was an incredible day, with a focus on Jesus. We literally retraced His footsteps today, along the shoreline of the Sea of Galilee and calling His disciples, seeing Him teach in the synagogue at Magdala, and watching Him walk on water.” 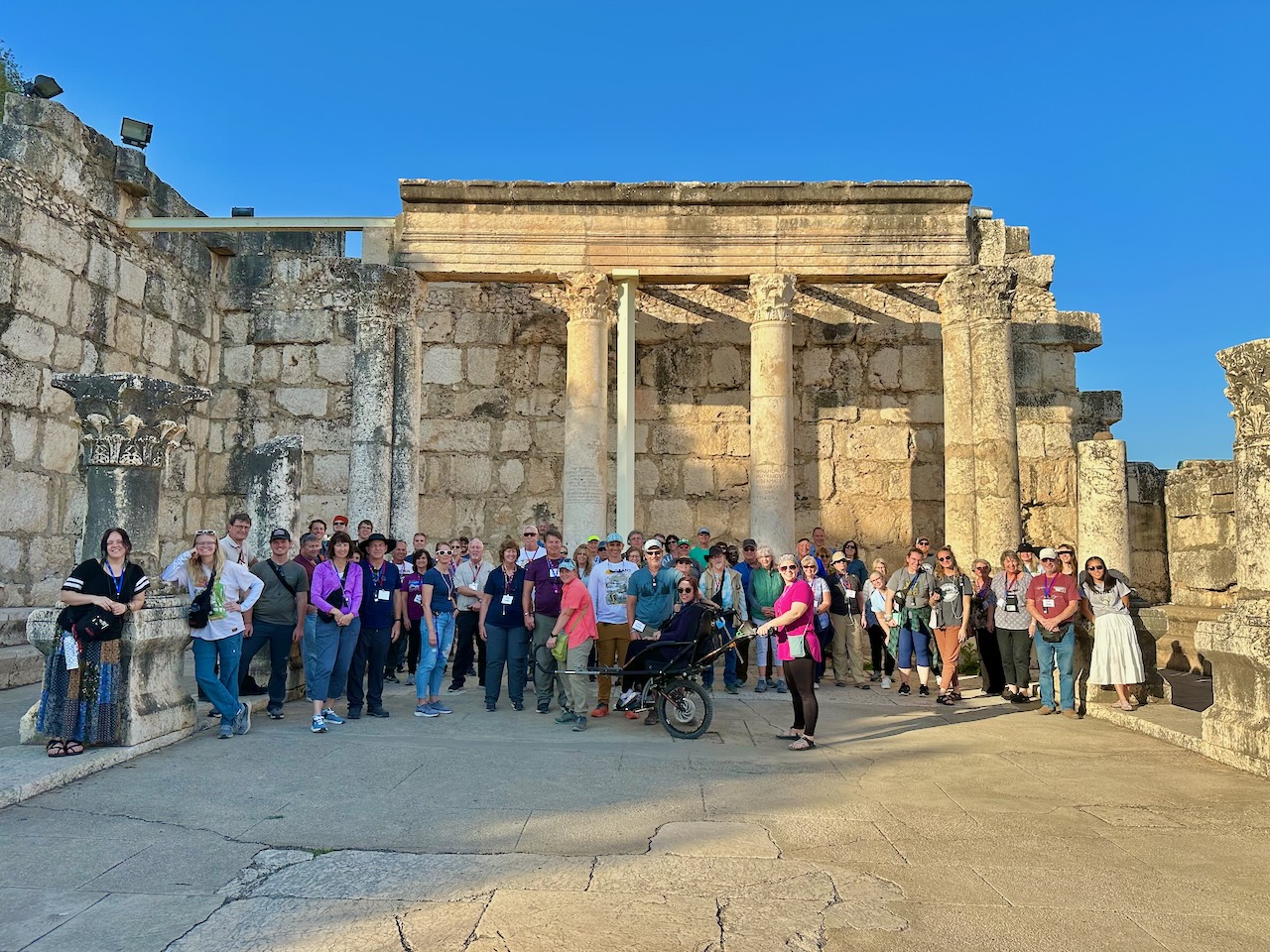 Close by down on the shoreline of the lake is the location of Capernaum. This was the “home base” for his ministry here in the Galilee. Sitting in the 5th century synagogue, we read from Mark 1,2; Luke 7; and John 6. We also saw many 1st century house structure ruins dating to the time of Jesus. Before we left the site, we spent some time down on the shoreline of the lake where we read the tender passage recored in Mark 9.

We ended the day towards sunset back to Nof Ginnosar. In the museum here we saw an ancient 1st century wooden boat that was discovered in 1986. We then walked out to the dock for our own boat ride. We enjoyed a time of worship and the reading of Mark 4 and Matthew 14, the two storm narratives. We keep our eyes on Jesus! He is the One who brings peace to our lives!

We walked back to our hotel rooms to freshen up for dinner. A free evening of leisure followed. 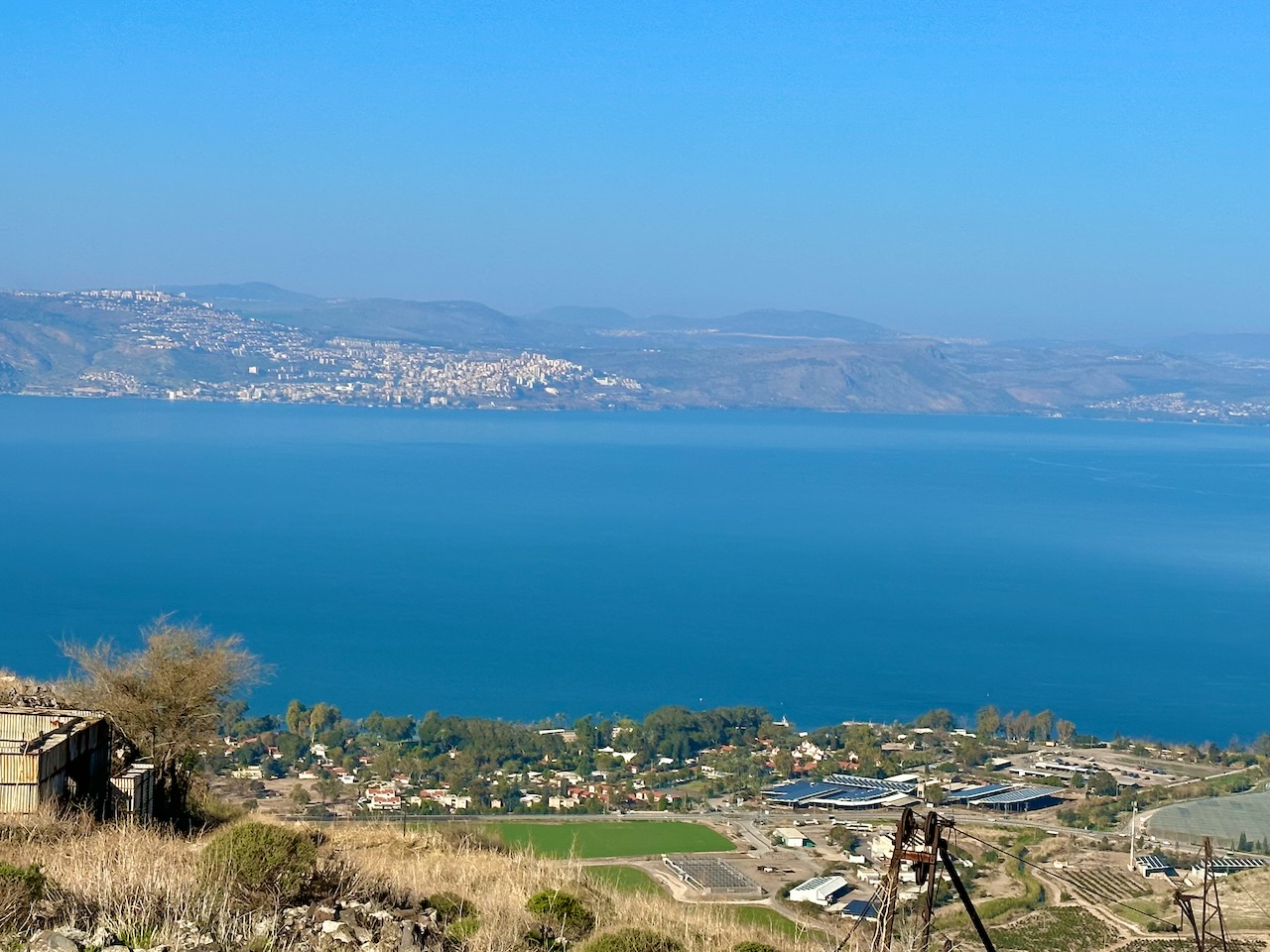 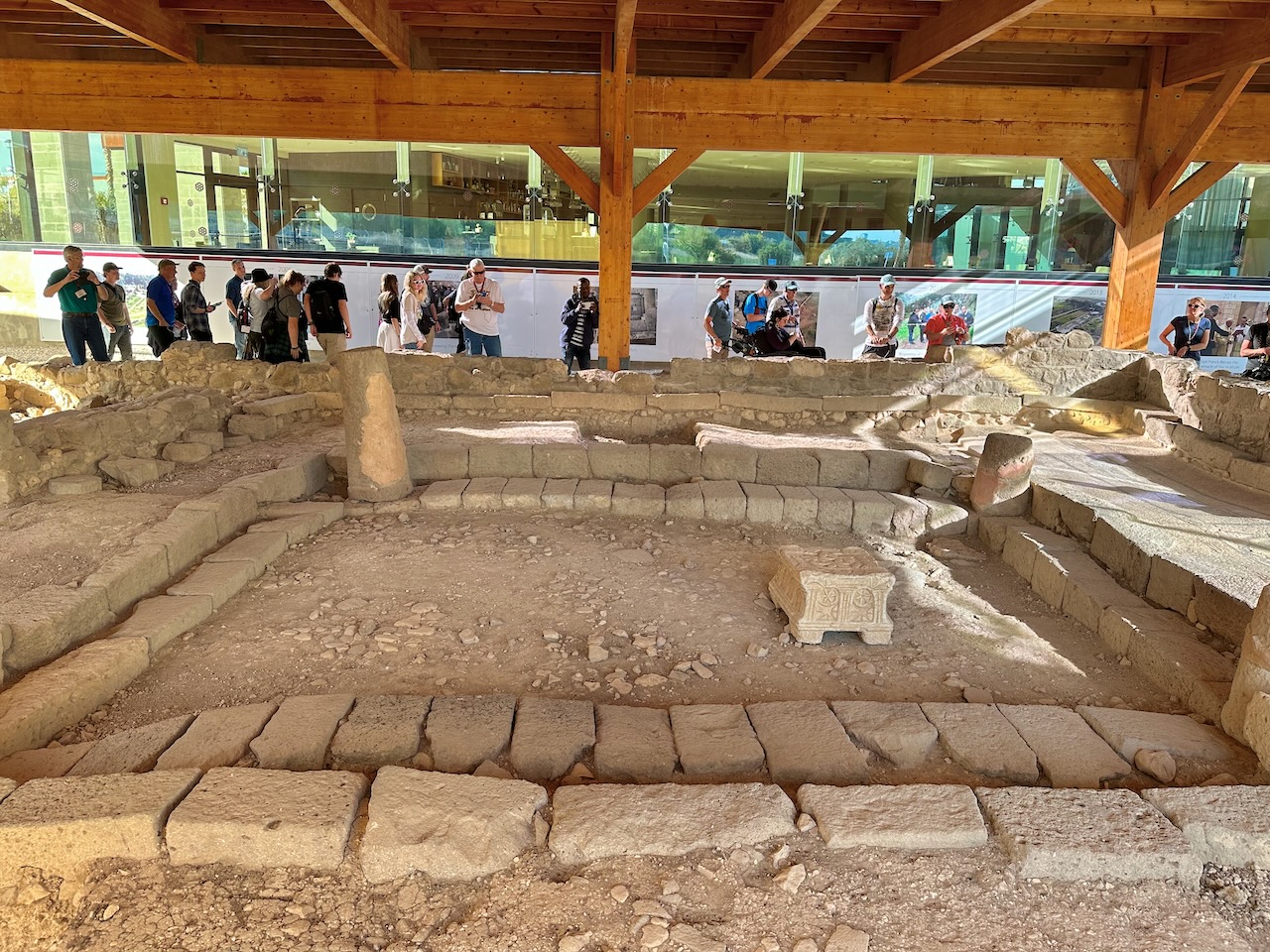 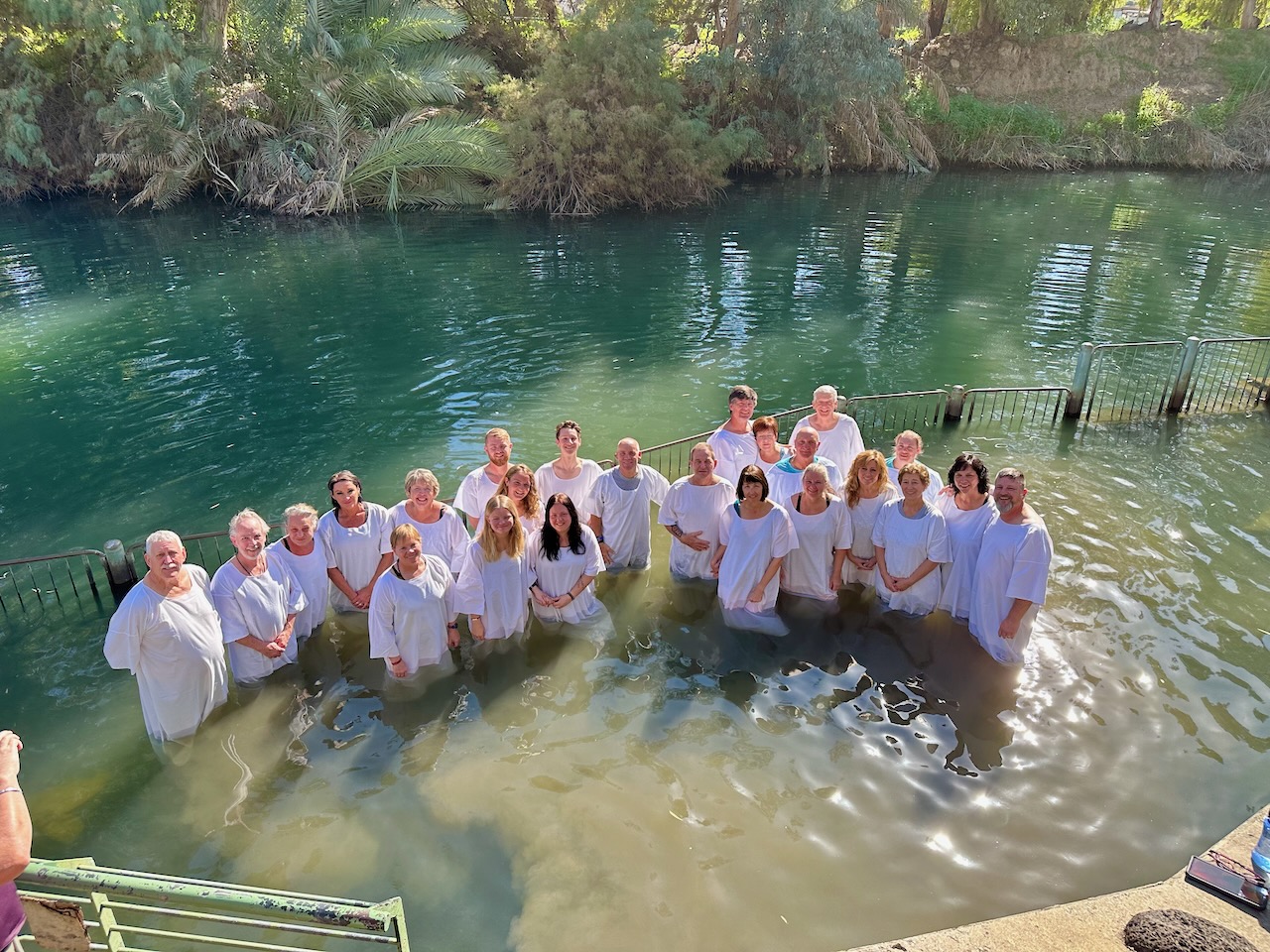 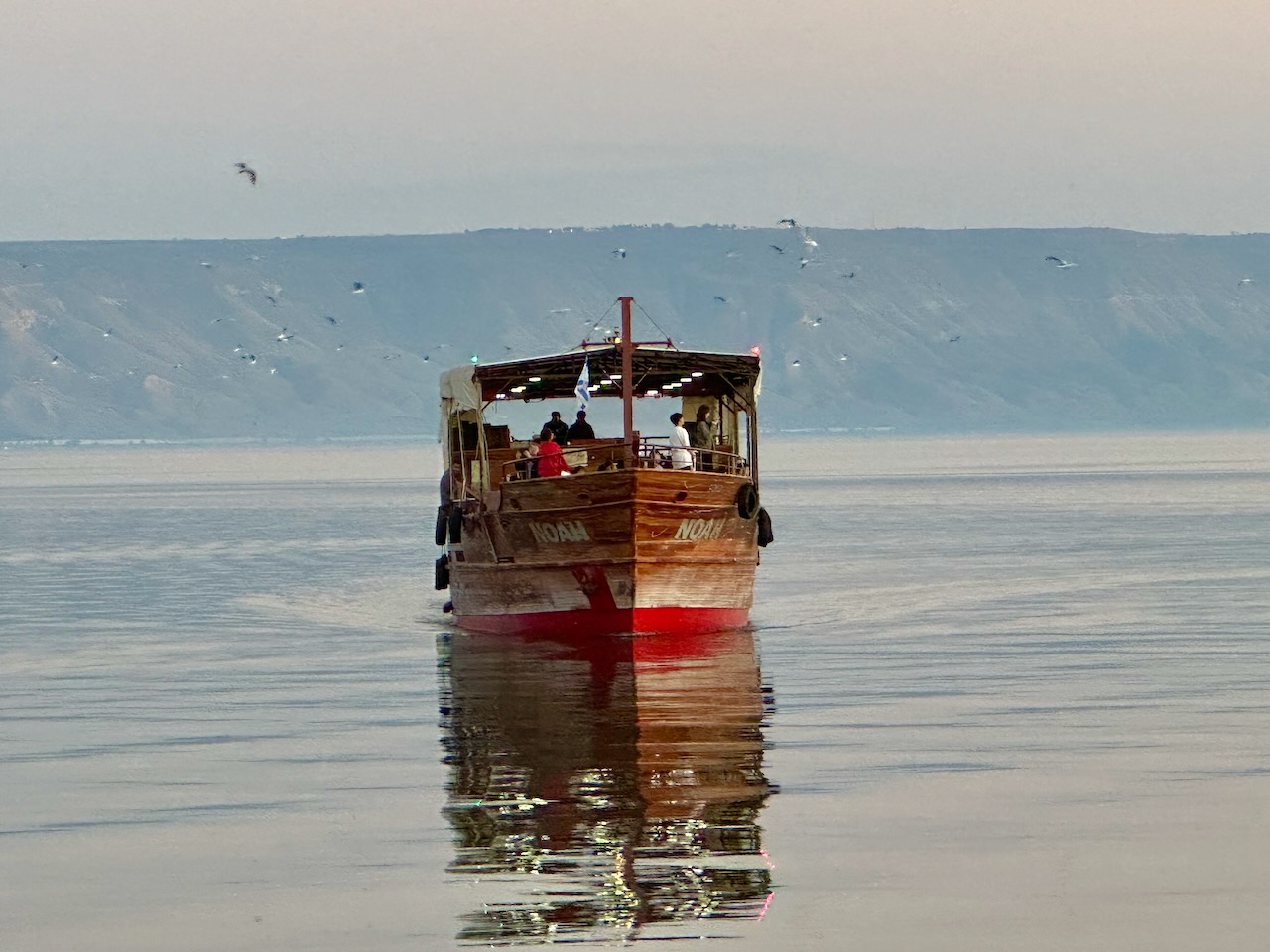